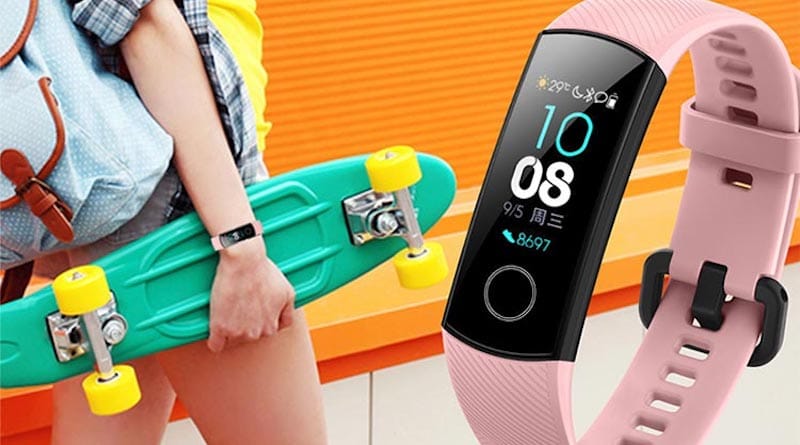 Huawei’s sub-brand Honor has announced the fourth iteration of its popular fitness band at a hardware event in London yesterday. The budget wearable has been available in China since mid-September, but is set to launch in Europe soon.

The Honor Band 4 could be a great alternative to the Xiaomi Mi Band 3 as it comes at a similar price point and specs. The wearable improves on the previous version but not in a drastic way.

It comes packing a 0.95 inch AMOLED screen and is the first Huawei band to feature a color display. Under the hood you’ll find a accelerometer, heart rate sensor and infrared light sensor (that detects when the bracelet is on the wrist). The gizmo keeps tabs on your activity 24/7 and supports swimming thanks to its 5 ATM water resistance.

Its sleep tracking function is now better than ever thanks to Huawei’s TruSleep technology. This is able to tell you how long you’ve spent in each sleep stage and whether you have any sleeping issues such as insomnia.

There are also the usual notifications for calls and messages and the function to mute incoming calls. An NFC chip for on-the-go payments can be found, too, although it is not yet clear which banks it will work with.

All things considered, there is nothing really groundbreaking here. The main attraction is the price.

There are two different iterations of the device, the standard model and a special Running Edition. The latter comes packing a 0.5-inch screen, which is about half the size of the regular variant. In addition to working from your wrist, the Running Edition can be attached to your shoes via a special buckle. From there it will utilise its 6-axis accelerometer to identify cadence, stride length, landing mode, swing angle, ground impact, ground contact time and eversion range.

We are not really sure what to think of this solution. If the tracker is sitting on your feet, that presumably means that you will not get heart rate and other stats. These are equally, if not more, important than the specialized running stats. Presumably the idea is the alternate the location on different runs.

In terms of battery life, the band does not disappoint. Huawei says the 100 mAh battery will keep the fitness tracker going for up to two weeks (and nearly three weeks in standby mode).

A firm availability date has not yet been announced although the regular edition is expected to launch in Europe later this month. It is unclear whether the Running Edition will be coming to these shores. The gizmo is expected to retail around the $80 mark (£60) which is the same price as its predecessor.

If you’re in the market for a fitness tracker and do not want to spend too much money, Honor Band 4 may spark your interest. We will aim to put the tracker through its paces and post a review in the coming months.