According to a new report from International Data Corporation (IDC), China’s wearables shipments reached 14.5 million in the third quarter of 2018, up 12.5% on the same period last year.

As expected Xiaomi topped the list. The Chinese tech giant registered more than 4 million shipments amounting to a 28.9% share of the market. This was, no doubt, helped by the launch of Mi Band 3 earlier this year.

It’s not really too surprising Xiaomi’s latest fitness tracker has been flying off the shelves. While not as comprehensive as some of the other options out there, this is a fitness band that delivers a lot for the price. Plus, with its lightweight, slick design, it looks good enough to wear during the day, in the office or for an evening function.

The latest iteration combines the best features of the predecessor devices and throws a better screen, water-resistance, all day heart-rate monitoring and NFC into the mix. 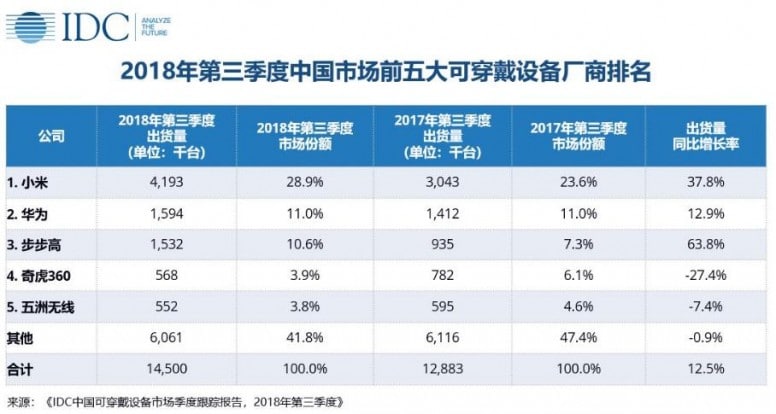 Huawei, under its Honor sub-brand, released new devices at the end of the third quarter so their impact was limited. Overall, the company shipped 1.594 million wearables between July and September, which was enough for an 11% share of the market.

BBK, which owns brands such as Vivo, Oppo and OnePlus, saw the highest growth rate in shipments jumping 64% year-on-year to 1,532 units. The company has made a name for itself in the kid’s smartwatch market which is slowly picking up steam in China.