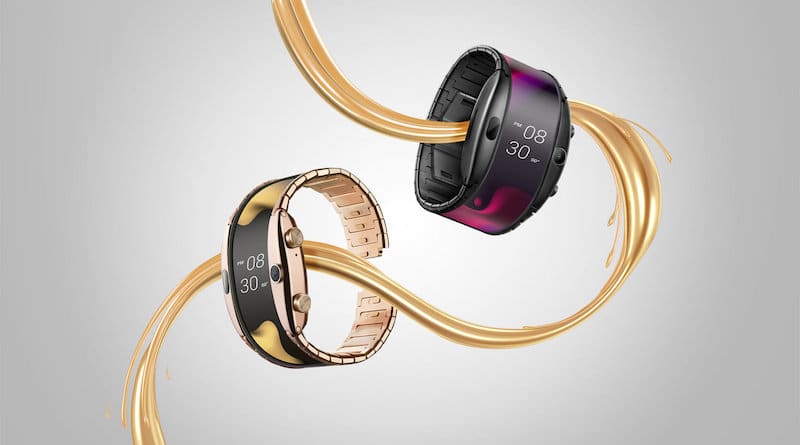 Nubia has announced it will launch its futuristic smartphone that bends around your wrist on April 8th. The device was teased in February at the Mobile World Congress in Barcelona, but it’s only now that we know the actual release date.

It seems 2019 will be the year of foldable electronics. A different slant on the whole concept comes from Chinese manufacturer Nubia. Instead of a smartphone that morphs into a tablet, their device sits somewhere between a smartwatch and a phone.

The Nubia Alpha comes with a long flexible OLED display that wraps around a user’s wrist like a fitness band. The 4-inch 960 x 192 pixel screen covers a large part of the wrist.

In terms of internal specs, the wearable has 1GB RAM and 8GB internal memory, as well as the aging Qualcomm Snapdragon Wear 2100 processor, a chip that was replaced last year by the Wear 3100. The 500mAh lithium ion battery will keep the thing going for up to 2 days with normal use, or a week on standby.

The gizmo has LTE connectivity and support for 4G eSIM cards, as well as a 5MP front-facing camera on the side. You can use the Nubia Alpha to make calls, read emails, find directions, use a variety of apps and the internet, all without a connection to your smartphone. The thing can also store and play music, using the Nubia Pods which are launching alongside the wearable.

Nubia Alpha looks like it might be a decent basic fitness tracker, too. It has a built-in accelerometer, heart rate sensor, digital compass, gyroscope and GPS. But despite these specs it’s questionable whether the chunky design will be comfortable enough to wear around the clock or for sports, something that is necessary for a 24/7 fitness device.

As shown in the video below, a novel feature are the air controls. They allow you to use hand gestures to navigate your way around the menus.

From April the 8th Nubia Alpha will be available in China, with pre-orders available immediately. The product should launch in the US and Europe soo after.

The bendable phone will be available in two versions, a Bluetooth-only and an eSIM model. The first will cost €449 (around $510) when it launches in Europe. The eSIM version will be available towards the end of the year. This one will come in a €549 ($620) black edition and a €649 ($740) version with a 18K gold finish.