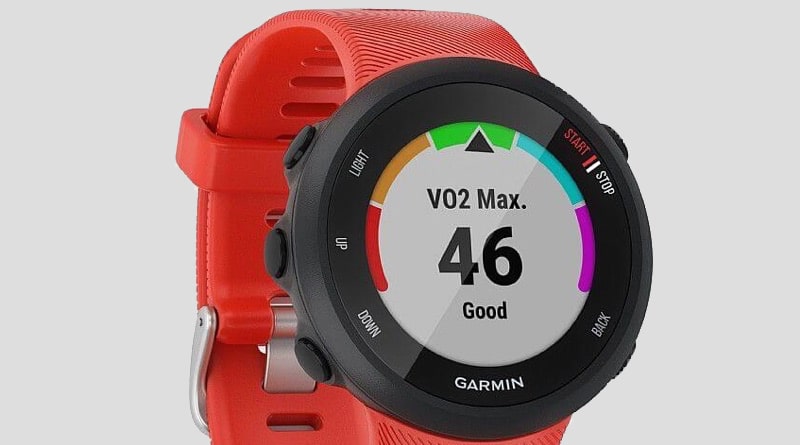 In recent weeks it seems almost very other day we’re writing about a rumored Garmin device. The latest in this “series” is the low-end Forerunner 45 sports watch.

As originally reported by Fitness Tracker Test, the device is meant for those that want a no frills affordable entry into the world of running watches. The 2-digit Forerunner version is set to replace the 35. The two look quite different, though.

The most obvious change is in design. The display of the new model with be full color whereas the previous model was black and white. Garmin has also moved from a rectangular display to a circular one.

Furthermore, the 45 will have 5 buttons like the higher-end watches in the series, whereas its predecessor only has four. This means navigation will be via buttons, so don’t expect touchscreen functionality.

The leaked images show there is no Quick Release for straps. Two small screws can be found on either side of the back of the strap which indicates that, with a little effort, replacing the straps will be possible.

Expect some more advanced performance stats such as VO2 max, heart rate zones, cadence and a few Firstbeat metrics. You’ll most likely be able to track other activity too, such as cycling.

Two product photos show an interesting feature – incident detection. This has been around for a while now in Garmin’s bike computers and the LTE version of Vivoactive 3 Music. Before the feature can be enabled, you must set up emergency contact information in the Garmin Connect Mobile app. When an incident is detected the app will send an automated text message and email with your name and GPS location to your emergency contacts.

Although far from being a fully featured smartwatch, the Forerunner 45 will also spit out notifications for incoming calls, voicemails and text messages. No word on battery life yet but its predecessor can go up to 9 days in watch mode, and up to 13 hours in training mode.

It looks like the watch will be a great option for those just getting into running. The Forerunner 45 will probably drop in mid-2019 or earlier. Expect for it to retail around the $200 mark. Before it sees the light of day we are expecting Garmin to announce the more high spec 245, 245 Music and 945.