The characteristic of water-resistance can often be a deciding factor when choosing a fitness tracker, smartwatch or heart rate monitor. However, if anyone tells you the device on your wrist is fully waterproof, its a lie. Because at a certain level of water pressure, every wearable will begin to leak. This is why regulation prohibits wearables to be marked as waterproof. Such a thing doesn’t exist.

Some confusion still remains regarding the various degrees of water-resistancy. Are you safe using your fitness device in the shower or in the rain? Will the device continue to function if you go into the swimming pool with it?

In this article we try and shed some light on the matter.

The first thing you need to do is check your device’s ISO rating.

ISO has developed a standard providing test methods and labelling features for watches and fitness wearables sold as “water-resistant”. The international standard puts onus on manufacturers to prove their devices are water-resistant against criteria of industry best practice and international know-how.

The ISO rating can often be found on the back of wrist watches or fitness devices to indicate how they is sealed against ingress of water. It is usually accompanied by an indication of the static test pressure that a sample of newly manufactured wearables were exposed to in a leakage test. The test pressure can be indicated either directly in bars, or (more commonly) as an equivalent water depth in meters (in the America sometimes also in feet).

An indication of the test pressure in terms of water depth does not mean that the wearable was designed for use in such water depths. For example, a fitness device marked at 30 meters depth cannot be expected to function indefinitely at 30 meters under water. This is because the test is conducted only once using static pressure on a newly manufactured wearable. In practical use, a fitness tracker or smartwatch is subjected to variations in pressure which can add to the static pressure of the water. Examples of this include the movement of a swimmer’s arm through the water, or violent sprays encountered in water skiing.

This means that tests include safety margins to take factors in account like aging of the seals, rapidly changing water pressure and temperature, as well as dynamic mechanical stresses. Also, resistance testing is performed in fresh water. So unless explicitly specified by the manufacturer, devices are not guaranteed to hold under salt water.

It is important to note, that there is no uniform testing method. Which means that in some cases, suggested real-world usage may differ slightly. As a general rule however, the minimum could be described as follows: 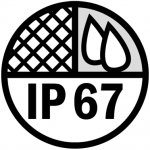 The IP Code (or International Protection Rating, sometimes also interpreted as Ingress Protection Rating), consists of the letters IP followed by two digits and an optional letter. As defined in international standard IEC 60529, IP classifies degrees of protection provided against the intrusion of solid objects (including body parts like hands and fingers), dust, accidental contact, and water in electrical enclosures.

The first digit indicates the level of protection that the enclosure provides against access to hazardous parts (e.g., electrical conductors, moving parts) and the ingress of solid foreign objects.

Protection of the equipment inside the enclosure against harmful ingress of water.

So remember, there are no waterproof wearables. And make sure to always check the markings on your device or the manufacturers website before taking a wearable into the shower or pool.