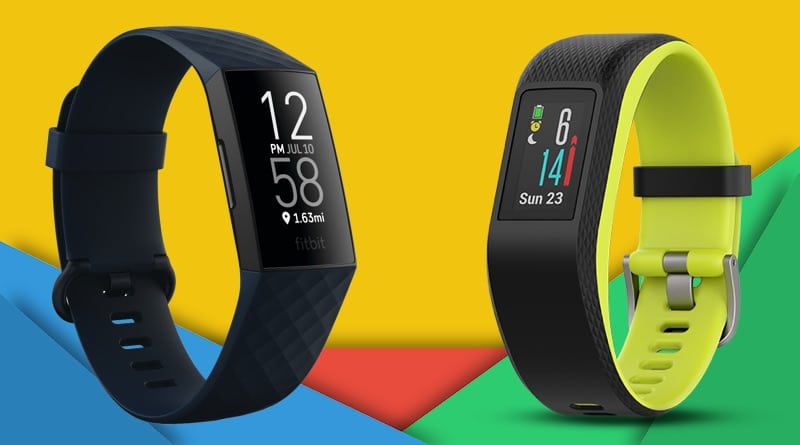 Unlike smartwatches, fitness bands with built-in GPS are few and far between. And while this will change in the coming years, for now there’s only a handful to choose from.

Some of us still like to wear an activity band. And when it comes to catering to this demographic, the GPS enabled Fitbit Charge 4 and Garmin Vivosport are amongst the best.

The first was launched this month and builds on the company’s flagship activity band. The second is nearly three years old but still packs a punch. It was clearly ahead of its time at launch. We would be surprised if at some point Garmin does not come out version two of the device.

If you’re in the market for a GPS-enabled fitness band Fitbit Charge 4 and Garmin Vivosport are both great choices. However, there are some differences to be aware of. Here’s exactly how they compare.

The two devices feature a fairly sporty look and are built from very lightweight materials. They both take the forms of classes fitness bands.

Fitbit Charge 4 looks almost identical to its predecessor. The grayscale OLED display is still the same with the Fitbit logo underneath, the one physical button is just an indent, although there is a slight difference in size with the second generation a fraction bigger.

As mentioned, Vivosport has been around for a while so there’s no previous generation to compare to. It has a distinct look with no physical buttons, and is one of the lightest and smallest fitness bands around.

The difference in displays is worth an extra mention. Fitbit has a grayscale OLED touchscreen with a 100 x 150 pixel resolution. Garmin’s is colour, sunlight-visible, transflective memory-in-pixel (MIP) which we have seen on a number of its sports watches. At 72 x 144 pixels, the resolution is slightly poorer than on the Fitbit but it has the advantage of being always-on. It also has quite large fonts which helps with readability.

The build of the trackers is fairly similar. They feature a rubberised, water-resistant design which includes a silicone strap and aluminum and polymer case. This makes them featherweights, with the Charge 4 measuring only 30 grams, Vivosport a bit less.

The Fitbit comes with two bands in the box that you can swap depending on your wrist size. Vivosport, on the other hand, comes in a small/medium or large so you will need to measure your wrist before purchase. Unlike the Garmin, Charge 4 allows for swapping of bands which works in its favour.

When it comes to fitness tracking sensors, the devices come packing an optical heart rate sensor, 3 axis-accelerometer and barometric altimeter . Fitbit Charge 4 goes further with a Pulse Ox sensor for monitoring blood oxygen levels during the night. Both devices also have built-in GPS, an important feature.

Fitbit has one more thing that works to its advantage. There’s an NFC chip for contactless payments so you can make purchases on the go without carrying cash, a card or your smartphone. Vivosmart’s extra is ANT+ compatibility, but only for sending heart rate data. You won’t be able to connect to an external heart rate monitor on either device.

Battery life is about a week on both wearables. Vivosport will go longer, though, with GPS switched on. The 8 hours you get is enough for almost anyone to run a marathon. Fitbit’s keeps going for 5 hours.

Charge 4 and Vivosport are amongst the most feature-packed fitness bands around. Expect little difference in the quality of data as they both come from reputable brands that have this side of things nailed down.

The trackers will monitor all the essentials including a floor count and 24/7 heart rate. They come with automatic activity recognition, move reminders and some more advanced performance metrics – but each has some things the other doesn’t.

In Fitbit’s case the extra is Pulse Ox. The functionality was only recently enabled on a few of its devices including the Versa and Ionic. This allows for monitoring blood oxygen levels during the night. A number of Garmin fitness devices have this functionality, but Vivosport doesn’t.

Another advantage of Charge 4 is its larger display. This makes it easier to read everything, particularly if you are on the go. The screen on Garmin’s device is always-on and colour, though, which will appeal to some.

An extra that you get with the Garmin is 24/7 stress tracking. The tracker does this by measuring heart-rate variability. A score between 0 and 100 will let you know whether you should take a chill-pill. The deep-breathing sessions that can be found on Vivosport can help with this. Breathing exercises can be found on the Charge 4 as well.

The fact that both devices offer built-in GPS is very important. It’s a big advantage for those who often run or cycle outdoors.

In terms of non-fitness functions, the fitness bands show basic notifications to keep you connected on the go. By default, the bands shows the time so double-up a watch.

Charge 4 goes further with the above mentioned NFC for payments not the go. This will make a difference to some, but not to others.

With Charge 4 you also get the ability to operate Spotify on your smartphone. This lets you play, stop, shuffle and skip songs with your phone safely tucked away in your pocket or bag. The Garmin comes with standard music controls of its own.

Charge 4 and Vivosport are amongst the best options if you are looking for a fitness band. What makes them distinct from much of the competition is the built-in GPS. This allows for phone-free tracking of running, cycling and other outdoor exercise

There’s very little to separate the two devices in terms of fitness tracking sensors and both cover the essentials well. The Charge 4 has the addition of the SpO2 sensor for monitoring blood oxygen during the night. The extra that you get on Garmin’s device is 24/7 stress monitoring.

The bigger differences are in design. Vivosport is more lightweight and has an always-on, colour display. But because its small it is slightly easier to read everything on Charge 4. Fitbit’s device also goes further in terms of non-fitness features with an NFC chip for contactless payments.

It’s not an easy choice between the two. We would put the Charge 4 slightly ahead as its newer, it has a larger display and some other extras. Having said that, Vivosport remains a great choice. You will struggle find a fitness band that packs so much functionality into such a small body.