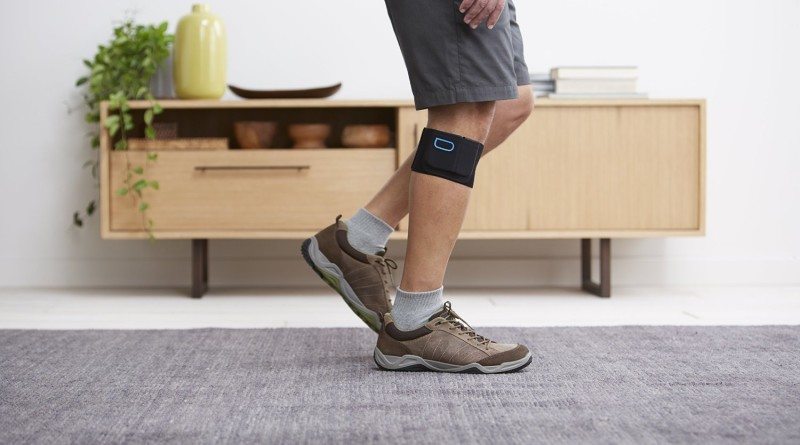 Quell is not your typical wearable. Worn just below the knee and activated by simply clicking a button, Quell taps into your body’s natural pain control system to block pain signals. The company ran a successful Indiegogo campaign which closed in April last year having raised over $400,000.

“67% of Quell users reported a reduction in their use of pain medication”, according to Quell’s website.

So how does it work?

The device is secured with velcro to allow a comfortable fit. Before you use it for the first time, you need to go through a brief calibration process. This basically adjusts the intensity of therapy and insures that the amount you receive is optimal. Once the calibration is complete, you are set to start a 60 minute therapy session. During the session you have the option to increase or decrease the intensity of the therapy.

Quell stimulates the sensory nerves, then sends neural pulses to your brain, where they trigger the body’s natural pain relief response releasing endogenous opioids. These opioids send pain signals toward the delta opioid receptor, which is what triggers those tedious feelings, and reduces the amount of pain you’re experiencing. Apparently, the sensation of using Quell can best be described as tingling, similar to the feeling you get when your leg ‘falls asleep’.

Although some people feel relief the first day, it can take several weeks for people with long standing chronic pain to notice a reduction in their pain. To ensure optimal pain relief, it is important that the Quell Device is properly calibrated, and that it is used consistently for several hours per day.

Quell is the first wearable of its kind that has been cleared by the FDA to be used while sleeping. The better you sleep, the less pain you will have and the better you’ll feel. The device has a built in accelerometer to sense if you’ve laying down to sleep and will adjust the therapy so it won’t keep you awake, but still be effective in masking pain.

On a single charge, the wearable is able to provide up to 40 hours of relief, while Bluetooth connectivity allows it to pair with an iOS device and to track your therapy as well as sleep quality.

Quell will set you back $249.00. Replacement electrodes cost $30 and last for two weeks.  We have not tried out the device, but judging by the Amazon reviews, Quell may be on to something.