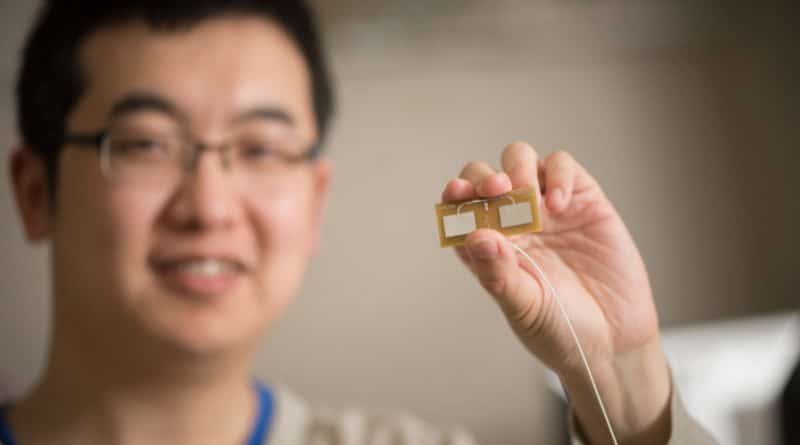 A new type of wearable under development may soon be able to monitor your eating, drinking, coughing and even social habits. This information could then be relayed to your doctor, and used when treating conditions such as obesity, diabetes, asthma and depression.

The prototype of the device, known as “Headscan”, is being developed by a team of engineers at Michigan State University in collaboration with researchers at Bell Labs. Unlike current wearables on the market, the tiny device is radio-based.

“HeadScan uses wireless radio signals to sense the targeted activities and provides a nonintrusive and privacy-preserving solution that overcomes the drawbacks of current wearable technologies,” said Mi Zhang, who is leading the project at Michigan State University.

This, however, will not a wearable you strap on to your wrist. Positioned on the shoulders, the device emits radio waves from two small antennas. The radio waves are bounced off the patient’s head, capturing capturing movements of the mouth and head.

“For example, it can monitor how often a person eats,” Zhang said. “Dietary monitoring is important. However, humans are not good at tracking these sorts of things. Fortunately computers are.”

Interestingly, the device could even be used to monitor how much a person talks as an indicator of one’s mental health, particularly depression.

Depression is a common illness worldwide, with an estimated 350 million people affected. The condition is different from usual mood fluctuations and short-lived emotional responses to challenges in everyday life, and may develop into a serious health condition if left untreated. Although there are known, effective treatments for depression, fewer than half of those affected receive such treatments.

“Headscan” is undergoing testing and further development, but could be available for commercial use within the next couple of years.