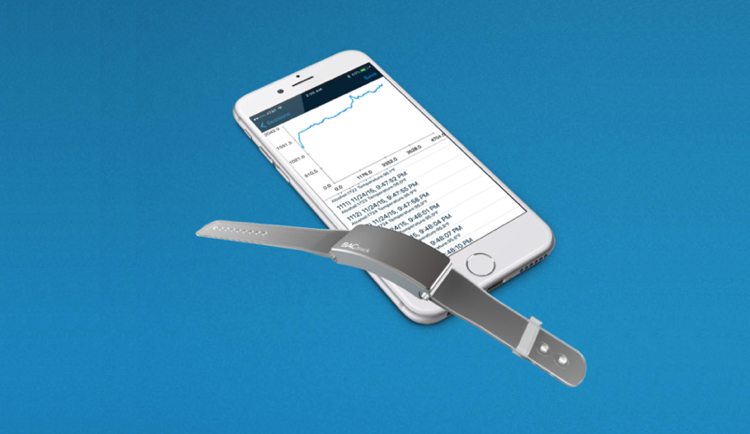 BACtrack Skyn is not your typical wearable. It will not track your steps, distance or sleep. This is essentially a wrist worn breathalyser – a device that passively tracks alcohol consumption through the skin.

The wearable comes from a startup called BACtrack. The San Francisco company just nabbed the top prize in a competition to design a new type of near real-time breathalyser that “could improve upon existing alcohol biosensor technology used in the criminal justice system.” The $200,000 first place prize was awarded by the National Institutes of Health (NIH). BACtrack’s entry beat eight other prototypes.

BACtrack Skyn works by measuring blood alcohol levels through the skin using fuel cell technology. While most consumed alcohol is processed within the body, some ethanol molecules escape through the skin. The wearable is able to read this ethanol signal and via BACtrack’s proprietary algorithms convert it into an estimated Blood Alcohol Content (BAC) reading.

“NIAAA issued this challenge to spark innovation in alcohol biosensor development. We were very pleased at the level of response and quality of prototypes that we received from the biotech community,” said NIH’s National Institute on Alcohol Abuse and Alcoholism head Dr George Koob.

Samples can be taken as frequently as every second and be sent from the wrist device to a smartphone, smartwatch or a cloud server. As it takes about 45 minutes for alcohol to be transmitted through the skin, the wearable does not offer real-time tracking. Which means that it can’t be used as a substitute for breathalysers or blood tests conducted by law enforcement. Instead the device is meant to detect and record a person’s recent history of drinking habits.

Nevertheless, the technology offers up the potential for a number of other interesting uses. You could for example set it up to remind you to slow down your drinking, or even to notify a member of your family when your BAC has gone above a certain level.

Have a look at the video below for more details on how it works.

The company has not submitted Skyn to the FDA for approval yet, as its still only in the prototype stage. Reuters reports that BACtrack will release a limited quantity this fall. For more information, or to sign up for a notification when the wearable is ready for pre-order, head over to the BacTrack website.