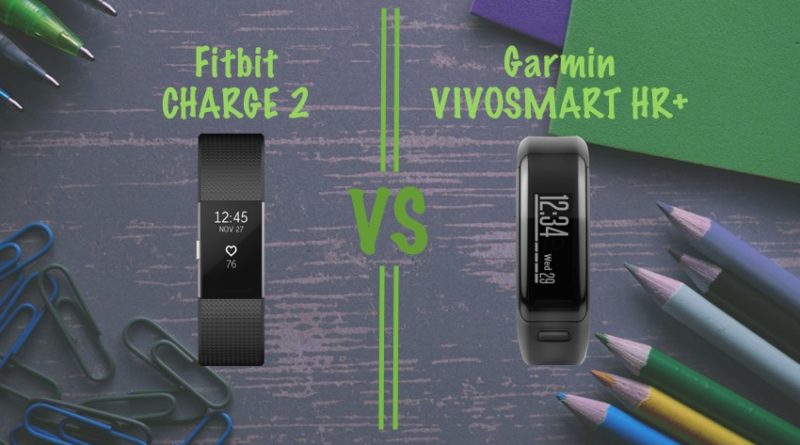 Fitbit and Garmin have had a busy year so far. To the delight of fitness buffs all over the world, both tech giants have been churned out a number of new activity trackers in 2016.

It is no longer enough just to bump up specs with each new generation of device. The tech community is increasingly grasping the importance of designing technology that is both functional and attractive. And wearables manufacturers have taken note of this.

With so many devices on offer it can be difficult to choose the right one for your needs. Arguably, for the average person who is after a solid 24/7 activity tracker, and who does the occasional run here and there, the Charge 2 and Vivosmart HR+ are the best options out there right now.

But how do they stack up against each other?

The Charge 2 retains the look and feel from its predecessor and can still be recognised as your typical Fitbit wearable. Albeit, a better looking one. The Vivosmart HR+ has seen a complete redesign. Although heavier than its predecessor, it remains a comfortable device.

The dimensions are almost exactly the same but the Charge 2 has a slightly larger screen. Both trackers are well suited for quickly glancing down at your stats which means you are not tied entirely to your smartphone to keep check on your progress.

In terms of the specifics, the Vivosmart sports an always on LCD B&W 160 x 68 pixels touchscreen display, while the Charge 2 features a monochrome OLED display that is four times as large compared to the Charge HR. Unfortunately, Fitbit’s screen leaves a lot to be desired in terms of sunlight readability. Garmin is the easier of the two to read in clear daylight.

Both of these devices come with standard watch-style clasp mechanisms. They are easy to put on and take off, and more importantly stay on.

While the aesthetics of any fitness tracker are always somewhat subjective, it seems to us that Fitbit has done a slightly better job. You can customize the look of your Charge 2 with swappable bands, something that cannot be done on Garmin’s tracker.

In terms of sensors, both wearables have an optical heart rate monitor, 3-axis accelerometer, altimerer and vibration motor. In addition to this, Garmin has included a built-in GPS sensor. The Charge 2, on the other hand, links to the GPS on your smartphone to provide more precise data on pace and distance when you’re running.

The battery life is roughly the same. Both have a rechargeable Lithium battery that will keep going for around 5 days, depending on use.

Waterproofing seems to be the norm these days with the new Apple Series 2 Watch boasting a swim friendly design. The Charge 2 is sweat, rain and splash proof. Garmin has one over on Fitbit here. The Vivosmart HR+ is water resistant down to 50 meters. It is slightly baffling though that the tracker doesn’t boast a swimming mode. Perhaps something that will be rectified with future firmware updates.

With so little to separate the two, in terms of design it really comes down to personal preferences. While the Charge 2 may look better and feature a larger screen, the Vivosmart HR+ has the added benefit of water resistance and a built-in GPS sensor.

As you would expect, you will find the essentials on both wearables. This includes 24/7 heart rate monitoring (including resting heart rate), tracking of steps, distance travelled, floors climbed, active minutes, calories burned and sleep (as well as a silent vibrating alarm). If you need a device that can track your basic activity levels, both will do the trick.

The trackers will spit out motivational messages through the day and nudge you with move reminders if you are having a particularly slow day. Garmin has the added benefit of its Move bar. It slowly builds up on the home screen, so you have a visual of just how inactive you are.

There is also automatic activity recognition which means you will get credit even if you forget to log a workout. Whether you’re going for an intense run, light jog or just a walk, all of your data will be there inside the app when you’re done. Sleep recognition is automatic as well.

Heart rate monitoring is done continuously throughout the day, in addition to monitoring your ticker during a specific workout. You can view current and resting heart rate from the touchscreen, and during workouts you can see current heart rate when you swipe the display. Your resting heart rate is probably the best indicator of your health and fitness so its important to keep an eye on its value.

It is worth noting, both trackers will dish out similar metrics when it comes to your resting heart rate, but at high intensity activity the readings will not be as precise. If you are very serious about heart rate training, a chest strap is the way to go.

The Charge 2 offers one notable thing above the Garmin device and that is your cardiovascular score. This is a metric that is based on your estimated VO2 Max and is a good indicator of how fit you are. You can also see how you compare to those of the same age and gender, and ranges from poor to excellent.

The other new addition on Fitbit’s wearable are Guided Breathing Sessions called “Relax”. This is a relaxing mindfulness experience that calms your body and mind through personalized deep-breathing sessions. A bit like meditation.

More and more people are looking for wearables that integrate non-fitness functions. Smartphone notifications, for example, have become the norm. And both devices will cater to this. Each time you receive a text, email or call on your compatible Bluetooth device, the trackers will gently vibrate and display the information.

You can also set up third-party notifications including Facebook, Twitter, and more. The Vivosmart HR+ goes a step further by optionally providing you with other information such as the weather and letting you control your music right from the device itself.

In terms of the feature-set, we would actually give Garmin the slight edge here. The integrated GPS chip means that you can leave your phone behind when you go for a run, and the music controls provide added convenience. Fitbit should, however, be praised for its new Cardiovascular Fitness metric. In terms of the quality of data, there is little to separate the two.

Both trackers dish out a ton of information so the software side is a very important side of the equation. And this is where Fitbit clearly comes out on top.

Its smartphone app is one of the best out there. Everything is clearly laid out and intuitive. The main screen shows you all the important metrics, and tapping on a tile will take you to more detailed info. Along the bottom, you will find tabs that open up the dashboard screen, challenges, friends and account details.

Right now, it doesn’t get much better than the Fitbit app. The San Francisco outfit has clearly spent a lot of time making sure its software is clean and easy to use. 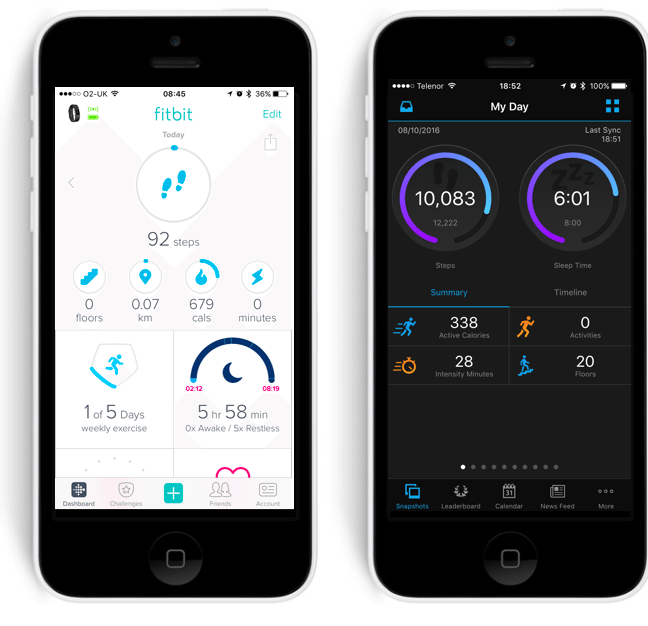 Garmin’s Connect app is also very comprehensive. But it is nowhere near as intuitive and easy to use.

There is a much steeper learning curve and you will find that most things take a few extra taps on the screen than on the Fitbit app. The information is there, its just that sometimes it is incredibly difficult to find it.

Having said that, the app will provide you with some very detailed data, so those who are more serious about training may value the added information. Likewise, Garmin’s web platform is more comprehensive than Fitbit’s, but again not as user friendly.

Both Fitbit and Garmin have come out with strong contenders in the fight for your wrist space. The Charge 2 and Vivosmart HR+ are fully featured fitness trackers which churn out fairly accurate data.

Where Fitbit shines, though, is in the overall user experience. While both wearables monitor pretty much the same metrics, for us Fitbit’s user-friendly smartphone app nudges it slightly ahead. This is despite the built-in GPS and waterproofing on Garmin’s device.

If you are a dedicated runner you will probably be better off with a fully featured sportswatch. If, on the other hand, you are the average person who is after a solid 24/7 activity tracker, you will not be disappointed whichever of the two you go with.