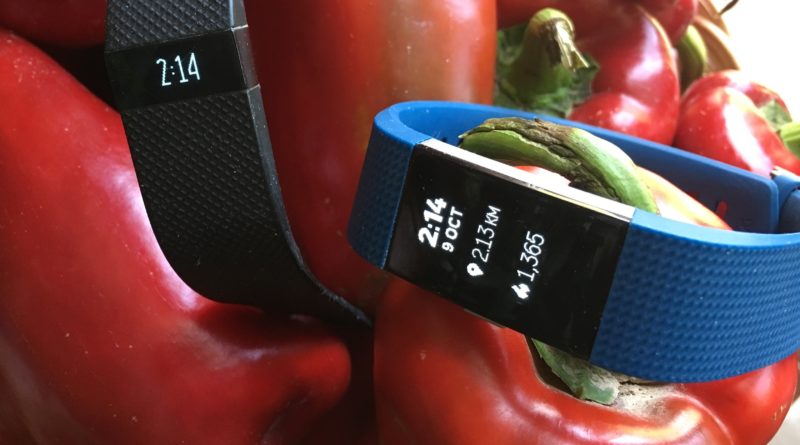 The Charge 2 is the latest addition to Fitbit’s line of wearable technology. Launched last month, the device is the follow-up to one of Fitbit’s most successful products – the Charge HR tracker.

The previous generation wearable was Gadgets & Wearable’s choice for the best fitness tracker in 2015, but how does the Charge 2 stack up? Is the beefed up version worth the added expense? Should you upgrade if you are an existing owner of the Charge HR?

Read on to find out how the devices differ before you hit that order button.

The Charge 2 retains the look and feel from its predecessor and can still be recognised as your typical Fitbit wearable. Its design actually comes across as a blend of the Charge HR and Alta. It definitely feels like a classier version of the original.

The new device sports a monochrome OLED display that is four times as large compared to the Charge HR. The screen is very sharp and clear indoors and outside of direct sunlight. Unfortunately, the same cannot be said for direct sunlight. Both trackers measure 21 millimeters wide and come with a textured elastomer band, although the Charge 2 band has a more premium feel.

Similar to the Alta and Blaze, you can customise the look of your Charge 2 with interchangeable bands. The silicone straps, which come in a variety of colors, are fastened with a stainless steel buckle which can easily be detached. Whats more, further customization options are available in the form of seven different clock-faces. The Charge HR does not have these customization tweaks or interchangeable bands, so if your band gets damaged, you have few options outside of replacing the tracker. 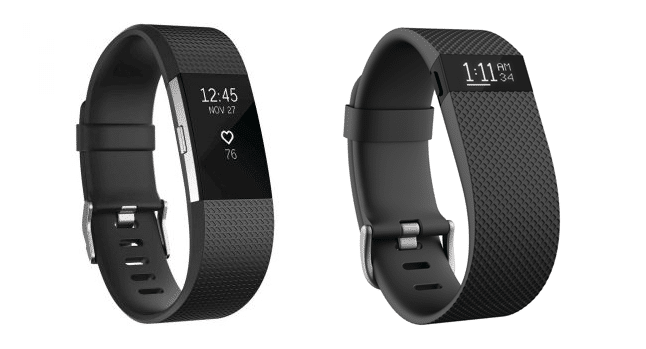 Both wearables have a single button which you can use to wake up the screen and page through the menu. You can also wake the screen up by double-tapping on the display, and on the Charge 2 by turning your wrist towards you. The Charge 2 is the first tracker in the Charge series to feature a touchscreen.

In terms of sensors, the two wearables are pretty much identical. Which means you will find the PurePulse heart rate sensor on the underside, while the core unit contains a 3-axis accelerometer, altimeter and a vibration motor. Unfortunately, the Charge 2 does not feature GPS, but you do get connected GPS. This is a fancy way of saying the device can tap into the GPS on your smartphone to get more accurate distance, pace and duration stats.

Rather impressively, despite the bigger screen real estate, the Charge 2 comes with similar battery life. It will typically keep going for around 5 days on a single charge. Our experience is that you would be at a stretch to squeeze more than 4 days on the previous generation device.

Waterproofing seems to be the norm these days with the new Apple Series 2 Watch boasting a swim friendly design. Just like the Charge HR, the Charge 2 water resistant up to 1 ATM. This means they are only sweat, rain and splash proof. If swimming is important to you, and you are dead-set on getting a Fitbit tracker, go for the Flex 2.

Despite similarities in this category, all in all the Charge 2 comes ahead. The previous generation device is several steps behind on the design front. 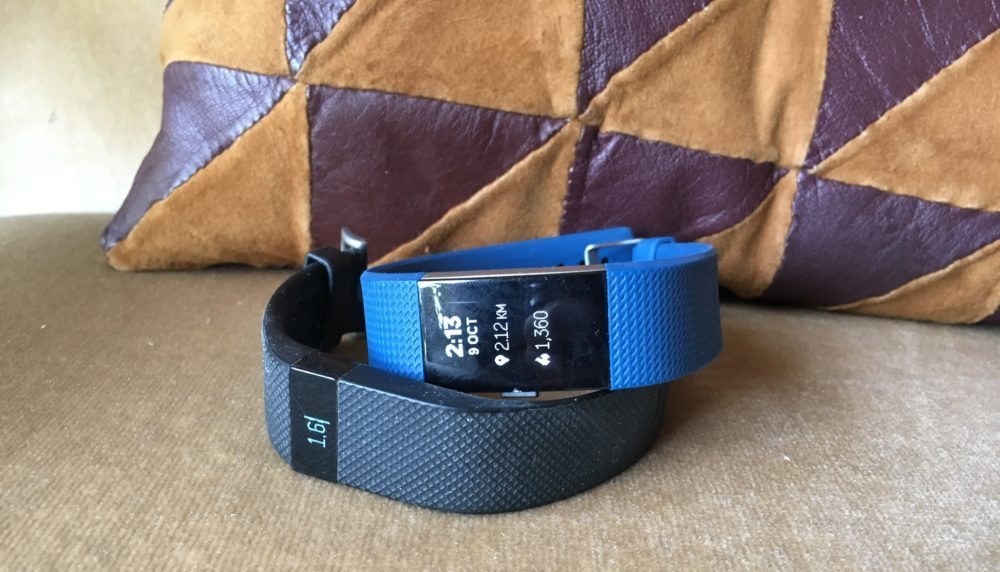 The Charge 2 is like a Charge HR with some extra add-ons. The new wearable carries over all of the features found on the Charge HR, which means it will track your heart rate (including resting heart rate), steps, distance travelled, floors climbed, active minutes, calories burned and sleep (as well as a silent vibrating alarm). And just like the original device, it will do a good job tracking these metrics. 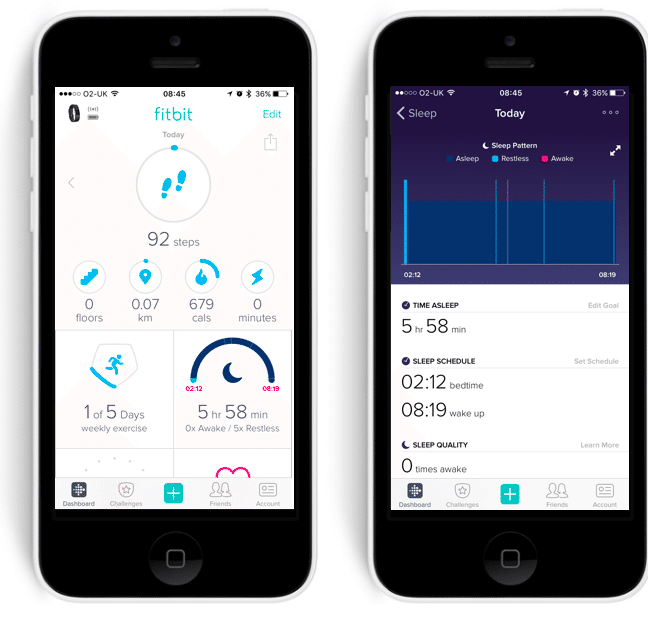 To help you stay active throughout the day, you will get Reminders to move that encourage you to take 250 steps every hour. The trackers also spit out motivational messages through the day.

Both devices have SmartTrack on board, which automatically recognises walking, running, outdoor biking and elliptical workouts and records it in the app. Sleep tracking is automatic as well. The Charge 2 also offers Multi-Sport tracking, a feature that was introduced on the Blaze earlier this year and allows users to track one of several activities from walking to yoga. 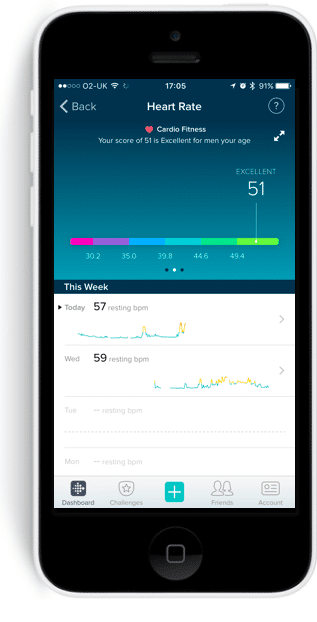 There are other differences between the two wearables that are powered by your personal heart rate.

The most interesting and potentially useful one is called Cardio Fitness Level. Available only on Charge 2, it gives you a snapshot of your fitness level using a personalised Cardio Fitness Score.

The Cardio Fitness Score is based on your estimated VO2 Max that is calculated using your user profile and resting heart rate. The Cardio Fitness Level shows how you compare to those of the same age and gender, and ranges from poor to excellent. You will also get get guidance to take action and improve your score over time by increasing exercise frequency, intensity, or by reaching a healthier weight.

The other new addition are Guided Breathing Sessions. This is a relaxing mindfulness experience that calms your body and mind through personalized deep-breathing sessions called “Relax”.

Finally, the bigger screen on the new wearable allows for smartphone notifications. This includes calls (the tracker will buzz briefly showing the telephone number), texts and calendar alerts. Third-party notifications from social media do not show, meaning all your Facebook notifications, Twitter messages and Instagram likes will go unread. The Charge 2 does not pretend to be a smartwatch, so you only get a notification which will disappear after a short while. 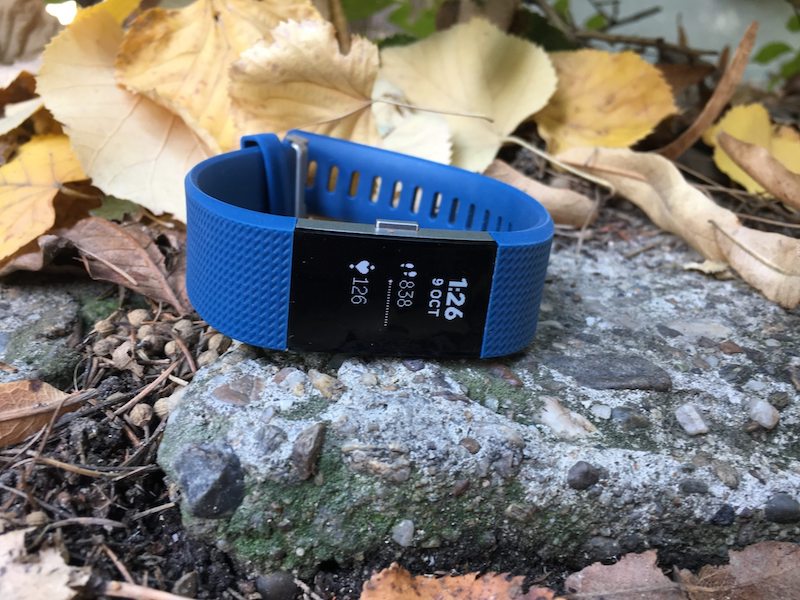 There’s a new Fitbit in town. The Charge 2 is a sleek looking device that delivers solid improvements on its predecessors in a few areas, particularly in terms of design. In addition to this, for the added $20 price tag you get smartphone notifications, multi-sport tracking, connected GPS, Cardio Fitness Level and Guided Breathing sessions.

Fitbit has the right strategy in mind. Instead of adding a host of new features, it is focusing on what it does well, and improving on it. The changes this year are evolutionary rather than revolutionary. Although it would have been nice to see built-in GPS and waterproofing, we have no doubt the Charge 2 will sell just as well as the Charge HR.

For the average person who is after a solid 24/7 activity tracker the Charge 2 checks all the boxes and is worth the added expense. So if you are in the market for a new tracker, don’t even think about it – get the Charge 2. If you are an existing owner of the Charge HR, unless the added screen real estate is really important to you, you might want to wait for the 2017 version.

3 thoughts on “Fitbit Charge 2 vs Charge HR: what’s the difference?”