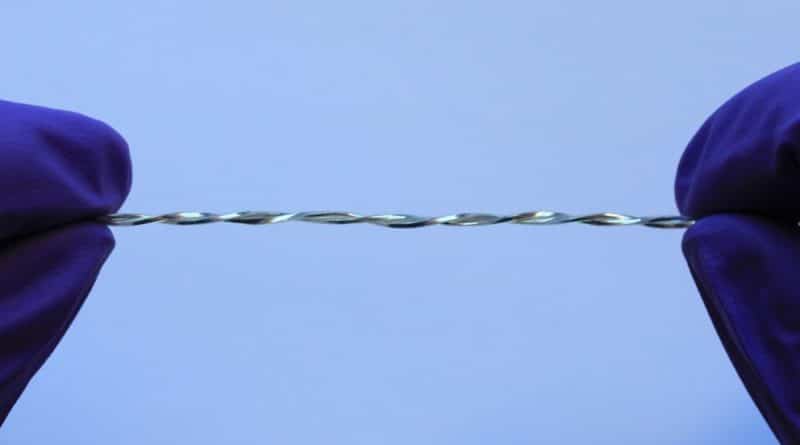 Sensors embedded into your everyday wear are in a perfect position to understand the minute workings of your body. From monitoring your heat rate to analyzing your sweat and keeping tabs on your breathing. The possibilities are endless.

Despite this, its fair to say that we have not seen much so far in terms of smart clothes. Perhaps this is to due with the fact that it is difficult to integrate high tech sensors into stretchable fabrics.

Researchers are aware of this problem and have been working on ways to make electronics softer and more flexible. A team of scientists from North Carolina State University have now created conductive and stretchable wires that can sense torsion (twisting), strain (elongation), and touch, and interface with electronic devices.

“Touch is a common way to interact with electronics using keyboards and touch screens,” says Michael Dickey, one of the authors of the paper.

“We have created soft and stretchable fibers that can detect touch, as well as strain and twisting. These microscopic fibers may be useful for integrating electronics in new places, including wearable devices.”

The full paper is published in the journal Advanced Functional Materials. It describes the new strands as only a few hundred microns in diameter, which is slightly thicker than a human hair. Each fiber consists of three strands which are filled with a liquid metal alloy and twisted together into a tight spiral. Touch screens on smart phones and tablets utilize similar technology, which is implemented here in a stretchable fiber form factor.

When your finger touches the fiber, it changes the capacitance between your finger and the allow inside. By moving your finger you are essentially able to send different electronic signals depending on which part of the fiber you touch. This is like touching a different part of your smartphone screen which is then translated into different actions on your mobile device.

“We can tell how many times the fiber has been twisted based on the change in capacitance,” Dickey adds.

“That’s valuable for use in torsion sensors, which measure how many times, and how quickly, something revolves. The advantage of our sensor is that it is built from elastic materials and can therefore be twisted 100 times more – two orders of magnitude – than existing torsion sensors.”

Researchers hope that the technology could be used for wearables, soft robotics and other applications where flexibility is important.

Its safe to say, we can look forward to a not too distant future when having smart clothes in your wardrobe becomes the norm. And when this happens, it will make wrist worn fitness trackers obsolete. After all, wearable tech is at its best when it is inconspicuous.