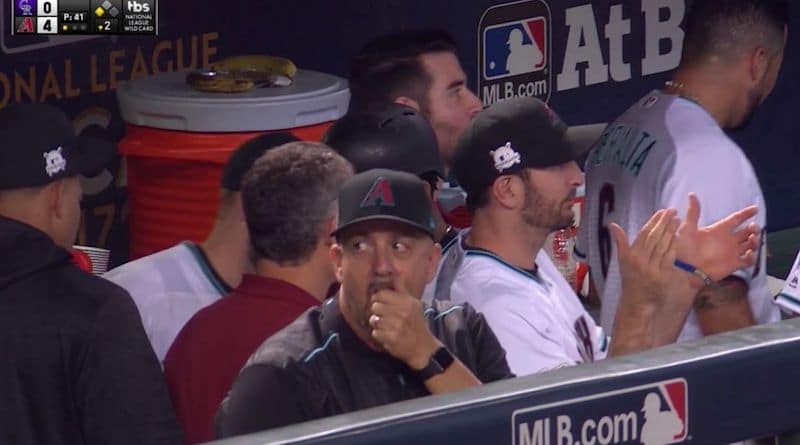 Major League Baseball (MLB) has fined one of Arizona Diamondbacks coaches for wearing an Apple Watch in the dugout during a National League Wild Card Game at Chase Field in Phoenix.

Officials at the MLB have definitely shown willingness to stamp out any use of wearable technology during games. They spotted Ariel Prieto wearing the smartwatch during an October 4th game against the Colorado Rockies. As shown above, there are even pictures to prove it.

The Diamondbacks say that their coach simply made a mistake. A further investigation confirmed this and cleared Prieto of any cheating.

“MLB found no evidence that Mr. Prieto used the Apple Watch or cell phone for any purpose in the dugout, nor any baseball-related communication on either device, during Wednesday’s game.”

The coach was, however, fined an undisclosed amount for breaking league rules as the mere presence of the smartwatch is enough. The Arizona Diamondbacks team is facing a fine, too. League officials said the funds will be donated to Hurricane Maria relief in Puerto Rico.

“Despite these findings, Mr. Prieto violated MLB’s on-field regulation by having this device in the dugout,” continued the statement.

“As a result, Mr. Prieto and the D-backs have each been fined an undisclosed amount. The amount of the fines will in turn be donated by the Office of the Commissioner to hurricane relief efforts in Puerto Rico.”

The penalties come about a month after the Boston Red Sox were slapped with a fine for using a Fitbit to gain unfair advantage during play. The team’s video personnel had apparently passed the Yankees’ signs to the Red Sox dugout which was then transmitted on to the players.

MLB has a reputation for being resistant to change but the organisation began allowing players to use the Motus Baseball Sleeve and Zephyr Bioharness monitor for the 2016 season. Players are prohibited from wearing any electronic communication devices on the field during games, though.

This year, league officials have added one more wearable to the approved list – the Whoop Strap. Some of these devices aim to assist with injury prevention, while others give coaches and trainers an overall look at players performance.