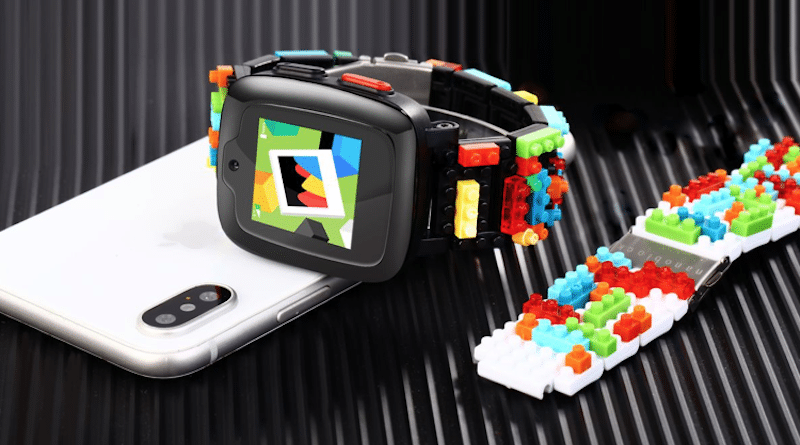 Omate has teamed up with Japanese toy manufacturer Nanoblock to launch a new smartwatch for kids called the Omate x Nanoblock. Composed of colorful LEGO-like blocks arranged on its wristband, the watch comes chock-full of features.

Omate x Nanoblock can make two-way voice and video calls so parents can keep in touch with their kids. Should the little ones get lost, they can activate the SOS function. There is a location tracker in the device that pinpoints your kids whereabouts by combining GPS, cellular networks and Wi-Fi hotspots. This means parents can keep track of their little ones in real-time via the accompanying app.

Most importantly, the new smartwatch protects your kids through a secured SIM data plan from Tata Communications. To ensure no-one listens in, the company says all this location, messaging, and video calling data is funneled through and encrypted end-to-end over a virtual private network (VPN).

The extra layer of security is certainly most welcome. While most countries do not prohibit sales of GPS watches for kids, late last year Germany issued a ban on certain devices. The country’s regulator, the Bundesnetzagentur, has prohibited the sale of children’s smartwatches with listening capabilities as they go against the country’s surveilance laws.

“Given the growing threat of cyber-crime, any device or application aimed at children must be safeguarded with the highest levels of security,” said Laurent Le Pen, Founder & CEO, Omate.

“What sets the Omate x Nanoblock apart from other children’s smartwatches is the extra security layer provided by the global private network of Tata Communications MOVE – IoT Connect™. It means that parents can keep track of and in touch with their kids in real-time, but no data on the network can be intercepted by unscrupulous individuals.”

The Omate x Nanoblock will be unveiled at Mobile World Congress in Barcelona at the end of this month. There will be a Limited Edition of 1,000 units available for pre-order in April for $179. This price includes a one year 3G data plan (100mb data/month) provided by Tata Communications.

The watch will start shipping in June first in the US and Europe. You’ll be able to choose between a white and black version.