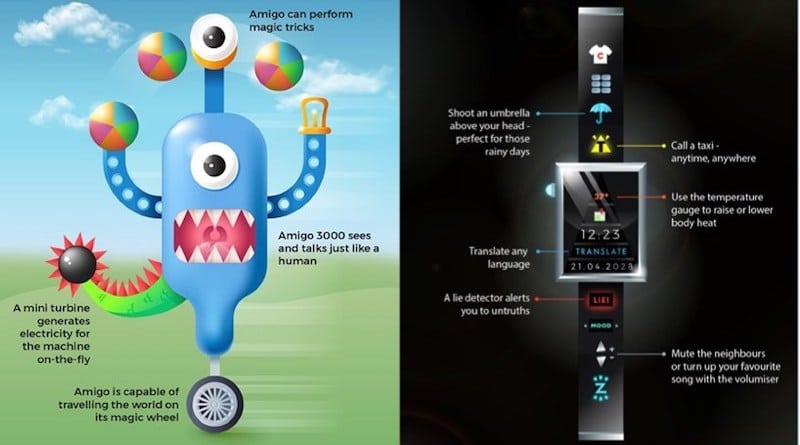 We love smartwatches here at Gadgets and Wearables. Whether it’s the new FIFA World Cup smartwatch or a fitness tracker that helps us hit the gym, we’ll always cover new and exciting tech.

That’s why we couldn’t help take an interest in a campaign Currys staged last month, in which children were asked to come up with ideas for a future smartwatch. What might we be wearing on our wrists in 30, 40, 50 years’ time? The kids sent in their drawings alongside explanations and demonstrated that, when it comes to imagination, they definitely have an edge on us adults.

We’ve picked out a few of our favourites below. (Currys also brought each child’s drawing to life courtesy of a professional illustrator).

Eleven-year-old Reneh Miller has hit upon ideas we think could become reality in the not-too-distant future.
First, there’s the fact the watch is designed to charge itself, a technology we’re certain will shape the industry in years to come. Consider the fact that scientists are already trying to get phones to charge when exposed to sunlight. Very cool.

Built into Reneh’s design is a system for holograms. If you’ve ever seen the famous video of Tupac Shakur “brought back to life” at Coachella in 2012, you’ll know that holograms aren’t as far-fetched as they sound. Imagine talking to a loved one on the other side of the world who is projected from your wrist.

Finally, we like the idea of a watch strap that changes colour depending on your mood – for novelty if nothing else.

Amigo 3000 is something a little different. Ten-year-old Benjamin has come up with the idea of a physical assistant that follows you around on a wheel, while a turbine generates electricity while it goes.

Now, granted, it’s not a watch, but we assume Amigo 3000 will be able to tell you the time whenever you please, so it does sort of function like one.

But we really like this idea because personal assistants are on the horizon and they’re going to act as a logical extension of the apps we keep on our phones and watches.

Spacecore, by ten-year-old Thomas, is packed with features. Where do we start?

Well, there’s an option for translating any language, which is prescient: speech-to-speech translation is a feature modern smartphones are playing around with, and it could come to our watches too.

There’s a 24-hour, anytime-anywhere taxi service and before we forget, the addition of a lie detector, which sounds very Black Mirror-esque, and represents the sort of world worth striving for.

Thomas has got some other cool ideas which you can check out in the side-by-side shot above. If you’d like to scope out all the ideas, read the official campaign post on Currys’ TechTalk website.

In the end we think the kids demonstrated that no idea is too big, or bold, to be squeezed into a small frame like a smartwatch. And that’s the spirit and the inventiveness we love to see here at Gadgets and Wearables.