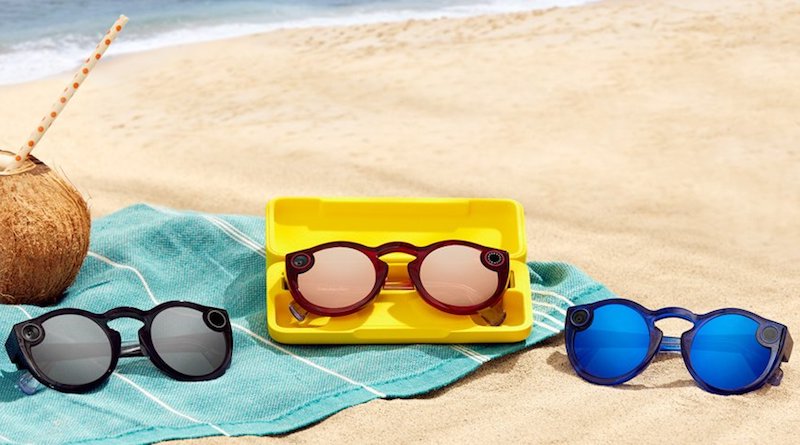 Despite the first generation flop, Snap has decided to take another swing at its Spectacles idea. The new glasses come with a sleeker design, water-resistance and improved features.

Some would say its about to make the same mistake again, but its clear Snap has not given up on its camera equipped specs. Launched back in 2016, the company created a buzz around the smart glasses with sporadic sales that made the specs hard to find.

But after a few months of scarcity-fueled hype, demand died down. All in all, Snap sold around 150,000 spectacles, which was far below what it originally anticipated. The company ultimately booked a $40 million loss on costs “related to Spectacles inventory”.

Snap is now doubling-down on its specs idea. So what’s new and different?

First off, the design is benefitting from an upgrade. Spectacles 2.0 are smaller, slimmer and more comfortable to wear. Their weight has come down slightly to 45.4 grams. The company has also swapped the matte plastic on the front with a more subdued clear finish, making the glasses more mature looking.

Snap says the new specs are water-resistant “when it comes to shallow water”. They can even take a photo or video while submerged! Snap does not provide an actual water-rating, so you are best not keeping them under water for very long.

The colors are slightly different, too. You now get to choose between sapphire, ruby and onyx and each of these comes in a darker or lighter lens option. The original came in coral, teal, and black.

The audio quality of video captures has improved due to dual microphones which reduce wind noise and balance out audio from conversations. The videos will now always record in HD. Previously, if you wanted HD quality you had to import them into the app and then manually convert them.

One downgrade is the field of view. Now its 105-degrees, whereas before it was 115-degrees. But while you will get slightly less in your shot, the fisheye distortion should be lower.

To operate, press the button to record a 10-second video. Press again to keep recording up to 30 seconds. Press and hold to take a photo. This is a first. You could not take photos on the previous generation. The resolution of captured videos is 1216 x 1216 (25% better than previously) and photos are captured at 1642 x 1642.

The company says Spectacles will now transfer to the smartphone app up to four times quicker. A video takes 3 seconds on average to transfer compared to 9 seconds previously. The specs have enough on-board memory for up to 150 videos or 3,000 photos before importing.

Battery life is pretty good. It allows you to take up to 70 videos on a single charge. The Charging Case, which has benefitted form a 20% reduction in size, allows you to recharge up to four times on the go.

You’ll be happy to know there is no more vending machine non-sense! The one-size-fits-all smart glasses can be picked up on spectacles.com, $150, $20 more than the original. A further $125 will get you prescription lenses, thanks to a partnership with Lensabl. They are also available on Amazon (check prices).

Will the sequel succeed where the first version failed? Are you interested in the new specs? Let us know in the comments below.