Its a close race for supremacy in the wearable tech market, new data from Canalys reveals.

According to the market research outfit, in Q1-2018 Apple shipped some 3.8 million smartwatches maintaining its spot as the number one global wearable maker. Xiaomi lagged slightly behind with 3.7 million shipments. Both Apple and Xiaomi claimed around 18% of the market. The others were far behind with Fitbit in third accounting for 11%, followed by Garmin and Huawei with 7% and 6% respectively.

It is important to note that the Cupertino outfit’s wearables earnings are derived entirely from smartwatch sales. By contrast 90% of Xiaomi’s sales are made up of its low cost Mi Band and the remainder from its affordable smartwatches under the brand name Huami. Therefore while the two companies have similar shipment estimates, their revenue earned differs greatly.

“Key to Apple’s success with its latest Apple Watch Series 3 is the number of LTE-enabled watches it has been able to push into the hands of consumers,” he said.

“Operators welcome the additional revenue from device sales and the added subscription revenue for data on the Apple Watch, and the list of operators that sell the LTE Apple Watch worldwide is increasing each month.” 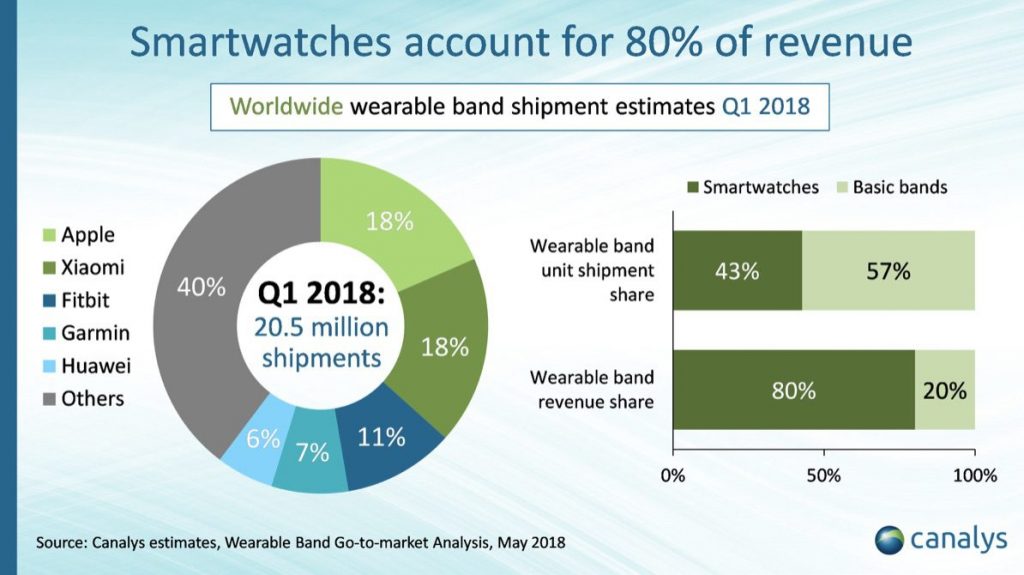 The report says the wearable market grew 35% year-on-year with a total of 20.5 million units sold. Smartwatches made up just 43% of wearable band units shipped in the quarter, but pulled in 80% of revenue while basic bands drew just a 20% share.

It will be interesting to see whether Apple succeeds in maintaining its dominant share going forward. The main battle will be in the smartwatch space and competition is heating up. Fitbit has joined the fray with its Ionic and more recently Versa devices, and Google’s rumored Pixel-branded watch range is set to land later this year.