The UK’s Premier League champions are looking to engage their fan-base by launching the world’s first football smart band. Retailing for £79.99, it promises to keep their supporters abreast with all the happenings at the club.

Both on and off the pitch, the FIFA World Cup 2018 saw technology playing a bigger role than ever. A new approach to tactical analysis and use of video technology were just some of the changes we saw. Wearable technology was an integral part in all of this. Refs were wearing the connected Big Bang Referee smartwatch, and lets not forget the Telstar 18 official ball which came with an NFC chip to enhance the fan experience. 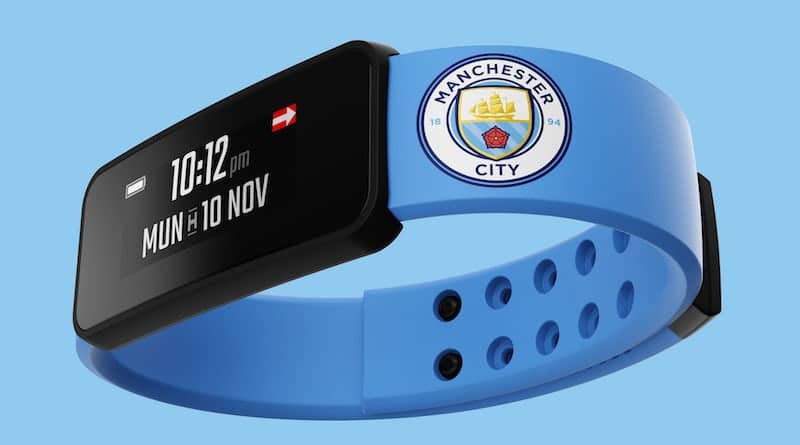 Now Manchester City have discovered a way to keep their fans engaged (and make a few bucks in the process). They’ve launched Fantom, a novel wristband that provides details of the countdown to kick-off for matches, live match updates, breaking news and more.

The wearable actually comes from a Swedish-based startup called Turnpike Group. They dub themselves as the “global leader in fantech”.

“Fantom is an instant tribe telegraph on your wrist, making you feel connected to everything happening around the club,” said Carl Norberg, co-founder of Turnpike Group, in a press release.

“For clubs it’s incredibly exciting because it enables them to understand and reach their most loyal fans in a completely personalised way, without cannibalising existing sales, relationships or channels.”

Fantom also allows fans to vote on club topics and daily quizzes. At the flick of a wrist, City supporters will now be able to choose their the Man of the Match during games.

“Fantom is for all fans. The fans in the stands, the voice in the pubs, those who stay awake in time zones far away and those stuck at work,” the advertisement on the ​official website reads.

“Fantom is made to keep you close to your club at all times, and we are continuously working hard on making that experience even better.

“This is only the beginning. Today, Fantom will give you the latest news, updates, live match reporting, polls and quizzes – right on your wrist. Wherever you are in the world.

As mentioned, those looking to get in on the fun will need to fork over £79.99. Understandably, City supporters are split over the announcement and some are using social media to ridicule the concept. After all, you can just take you smartphone out of your pocket and do all this for free!