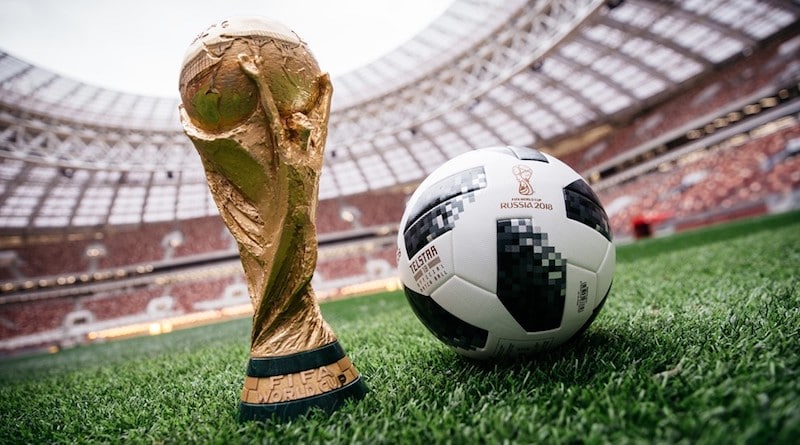 2018 is the year football fans across the globe have been waiting for. The World Cup is now well and truly under way and the opening games did not disappoint.

Both on and off the pitch, the Russian tournament will see technology playing a bigger role than ever. A new approach to tactical analysis and use of video technology are just some of the changes we will see. Although a bit late to the party, football’s governing bodies have finally recognised the importance of technology. This is in contrast with many other sports, which had incorporated video replays and other systems into their rules earlier.

After much toing and froing, The last World Cup in Brazil saw the debut of goal line technology. This was the first time referees had ever received any kind of artificial help in making decisions.

The 2018 World Cup is seeing the debut of video assistant referees. This is perhaps the biggest change, and one that has the potential to make the biggest impact. A team of people are supporting referees from a centralized video-operations room located at the international-broadcast center in Moscow. Refs can turn to the group consisting of one video assistant referee, three assistants and four replay operators for decisions on goals, penalties, red cards and more.

But what about wearable technology?

Hublot is the company behind the official smartwatch of FIFA World Cup 2018. The Big Bang Referee is a limited edition timepiece that runs Wear OS and comes with an assortment of World Cup-themed goodies.

There is a commercial version of the device which displays real-time info on scores, the number of cards, names of goal-scorers, player substitutions, time left before the final whistle and more. With only 2018 pieces in existence, its no wonder it comes attached to a rather hefty $5,200 price tag.

A special non-commercial version of the timepiece is being worn by referees. In addition to all the functionality of the commercial version, the ref version has the ability to interface with goal-line technology.

Adidas has a long tradition with the world’s largest football tournament. In fact, the company has manufactured every single tournament match ball since 1970. This year’s ball, however, is slightly different from the ones featured in previous competitions.

Telstar 18 is based on the concept of the iconic ball used at the Mexico World Cup in 1970. It features a brand new carcass and panel design which should add to durability. More interestingly, the ball has an embedded Near Field Communication (NFC) chip. This is purely for consumer use and will not help players track their kicks or headers. Its more of a fan experience that works with both Android and iOS devices.

While this is the first time such technology has been used in an official match, its not the first time we’ve come across a smart soccer ball. The Adidas Mi Coach has been around for a while now. It has a built-in sensor that tells you everything you need to know about your kicks so you can learn to control, strike and manipulate the ball like a pro.

And then there is Dribble Up. The difference here is that most of the clever work is done by the accompanying smartphone app rather than the ball itself. The app tracks the ball in real-time using the smartphone camera, analyses thousands of data points and synthesises this into training feedback.

This year all 32 teams will have access to the Electronic Performance and Tracking Systems. Those on the bench will able to access information about player metrics and positional data, as well as video footage. All of this will be subject to a 30-second delay. Each team will be supplied with three tablets, one each for an analyst on the stand and on the bench, and another one for the medical team.

Others are getting in on the game as well. Earlier this month Catapult Sports announced that its tracking devices have received FIFA’s stamp of approval. They will now bear the football association’s IMS mark to denote they can be used in official matches. Up to now, such technology was only allowed in training.

And back in March, the US Soccer Federation and STATSports announced a collaboration that will result in the world’s largest player data monitoring program. The partnership will see some 6,500 APEX GPS tracking units distributed to US men’s, women’s, youth, Paralympic, Futsal and Beach National Teams, Development Academy clubs and the NWSL.

This is only the beginning. Sports wearables are a growing field and FIFA is, quite rightly, looking to establish a global wearables standard. The idea is to have all professional teams using the same type of data-tracking technologies. This will ultimately serve to open a whole host of possibilities, allowing coaches, players and fans unprecedented insight into the game.