Now that Charge 3 is officially out, its getting all the more difficult to pick from the plethora of devices Fitbit has an offer. There are more than a dozen to choose from! Some have been discontinued by the company but you can still pick them up on Amazon and other retailers.

Charge 2 has been the most popular fitness tracker on the globe in recent years. For the average person who wants to monitor their activity 24/7 and who does the occasional run here and there, it ticks most boxes. Charge 3 makes its predecessor even better.

But how does it compare to Versa, the “mass-appeal’ smartwatch which has been flying off the shelves since its launch in the spring? Here is a run-down that will help you decide which is right for you.

Fitbit has learned a thing or two about design from its Pebble acquisition. Its most recent crop of devices looks stylish yet sporty. While Versa and Charge 3 carry some design similarities, there is one very important difference – the first takes the shape of a watch the second a fitness band.

Fitbit is doing away with various sizes so both devices come with a large and small strap in the box. Straps carry standard watch-style clasp mechanisms and are interchangeable, so you can tailor the wearables to your liking.

The much anticipated Charge 3 was announced last week and is available for pre-order now. The device is built of more lightweight material than its predecessor including an aerospace grade aluminum case and Corning Gorilla Glass 3 display. Measuring 18.3mm in width, 11.8 mm in depth and weighting only 29 grams, you’ll hardly feel it on your wrist.

The single physical button on the right hand side has been swapped with an inductive button. The display has grown by about 40% from the previous version, so is much better suited for quickly glancing down at your stats. 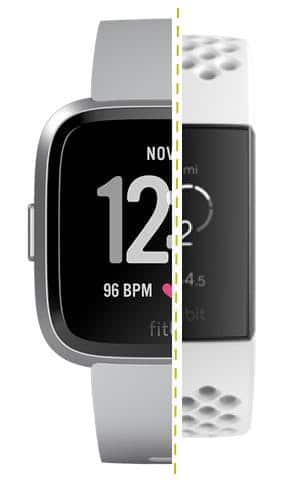 Versa is a timepiece that more closely resembles the Apple Watch or Pebble Time. It comes with rounded edges and a thin, lightweight body. This is a device that is much more appealing to the female demographic than Fitbit’s other smartwatch, the Ionic.

The core unit is built from strong and lightweight 6000 series aerospace-grade aluminium. There are three physical buttons on the sides, one on the left and two on the right. In combination with the touch-screen, this allows you to navigate through the display.

To compete with the Apple watch, Fitbit has gone with increased pixels and amplified brightness up to 1,000 nits. This is as good as it gets in terms of display quality at the moment and even outperforms some smartphones.

Under the hood, apart from the 3-axis gyroscope (that helps to improve how some of the fitness features work) and ambient light sensor you’ll find on Versa, the two are pretty much identical. This means they both have an optical heart rate monitor, 3-axis accelerometer, altimeter and vibration motor. Neither comes with a built-in GPS sensor but they can tap into your smartphone to pick up on satellite readings. Fitbit has probably done this keep keep the price low and battery life high.

Charge 3 and Versa also come with an upgraded heart rate sensor and something the company calls a relative SpO2 sensor. This measures blood oxygen levels and could be used to identify sleep apnea in the future. We are still waiting for Fitbit to put it to actual real-world use, though.

Battery life is important and is always a compromise between size, screen resolution and more. Luckily processing power is increasing each year as is battery technology.

Both of these devices have a rechargeable Lithium battery with a similar battery life. Charge 3 will keep going for around 7 days, which is two more than its predecessor. On a full charge, Versa will run for up to 5 days. Not bad.

The latest crop of Fitbit devices is water-friendly. Both Charge 3 and Versa come with a fantastic 5 ATM (50 meter) water-resistance rating, which means you can dunk them down to depths of 50 metres. They’ll track your adventures in the pool, too.

As you would expect, you will find the essentials on both devices. This includes 24/7 heart rate monitoring (including current, resting and heart rate zone information), tracking of steps, distance travelled, floors climbed, active minutes, calories burned and advanced sleep tracking features.

Finally, you’ll also get some more advanced metrics such as VO2 Max. Measured in millilitres of oxygen processed per kilogram of body weight every minute, the metric tells you how well your body uses oxygen when you’re working out at your hardest, i.e. how fit you are. And let’s not forget Breathing Sessions to keep you stress free and the Female Health Tracking function.

Now to the differences. And there really aren’t that many when it comes to fitness tracking. Not all that surprising considering that have the same sensors.

The most obvious one is that the smaller screen real-estate on Charge 3 means you won’t get as many stats on the display. Versa sports a display that is twice as large so its better for checking your metrics in on the go. Unlike Versa, Charge 3 also shows only workouts from the current day so you’ll need to head over to the smartphone app to view the rest.

But there are a couple of small differences that work in the favour of Charge 3. One is that it comes with a new feature called goal-based exercise modes. This allows users to set a goal for calories burned, distance, or duration, and see real-time stats, progress as you work towards meeting the goal.

The other difference is that Charge 3 has an auto-stop feature for runners. This automatically pauses the exercise mode if, for example, you need to stop for a traffic light or tie your shoe-lace. Something that actually happens quite often.

On to the non-fitness functions and again, there is little to separate the two. Even though Charge 3 looks like a fitness tracker, it comes with many functions you’ll find on smartwatches.

Both show basic notifications, the ability to reply to messages (for Android users) and the option to accept or reject calls. They also come in Special Edition versions that have an NFC chip for contactless payments.

There is the ability to install Fitbit and third-party apps. Granted the Versa comes with a wider choice of software, but Charge 3 will eventually catch up.

One important difference is that Versa comes with 2.5GB of internal memory which you can use to store up to 300 songs for off-line listening. It also provides access to Pandora and Deezer. Charge 3 on the other hand has no built-in music storage or for that matter any music capabilities. The latter might change with subsequent software updates.

In looks, Versa and Charge 3 are two totally different animals – one takes the shape of a watch the other a fitness band. And this is perhaps the biggest difference because in terms of functionality – there is actually very little to separate the two.

The Charge 3 will provide you a slightly better fitness experience and it will set you back about $50 less. But with its larger display, offline storage for music and wider selection of apps – Versa edges it out in non-fitness features.

If you are after 24/7 fitness tracking, either of these devices will have you covered. They both come with Fitbit’s full gamut of fitness tracking sensors, Connected GPS, water-resistance, decent battery life and the same great app. So its really down to individual taste and whether the difference in price is important to you.

2 thoughts on “Fitbit Charge 3 or Versa: which is right for you?”