The 10,000 step solution promoted by some health apps and fitness trackers may be doing more hard than good. Don’t buy into it.

There is no one-size fits all answer to how much we should walk. It depends on many factors such as your weight, age and health, for example. Generally speaking, most of us would benefit from walking more.

But why is that number commonly used? 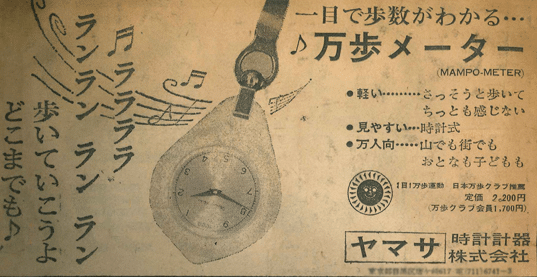 Walking 10,000 steps per day for health and weight loss was originally popularized more than half a century ago in Japan. Pedometers became all the rage in the run-up to the 1964 Tokyo Olympic games. At the time, a Japanese company came out with a device called a ‘manpo-kei’, which means 10,000 step meter. The ‘manpo-kei’ became a business slogan which resonated with people. Since then, 10,000 steps has become a commonly acknowledged goal for daily fitness across the world.

As you can see, the target that most of us have come to accept, is not exactly based on science! It is a nice round number, though, easy to remember.

Speaking at the American Association for the Advancement of Science (AAAS) annual meeting in Boston last year, Dr Greg Hager, from Johns Hopkins University in the US said that only a handful of the hundreds of thousand available healthcare apps are based on scientific evidence. But due to their popularity, they are likely to have an enormous impact on public health. He was especially critical of apps and devices that set the user a target of 10,000 steps.

“Some of you might wear Fitbits or something equivalent, and I bet every now and then it gives you that cool little message ‘you did 10,000 steps today.’ But is that the right number for any of you in this room? Who knows? It’s just a number that’s now built into the apps,” Dr Hager said.

“Until we have evidence based apps you could amplify issues. I mean imagine everyone thinks they have to do 10,000 steps but they are not actually physically capable of doing that, you could actually cause harm or damage by doing so. If you are elderly or infirm then this is not going to be good for you.”

The problem with universal fitness goals is that they don’t allow for the differences in individual’s capabilities. The average American walks around 5,000 steps a day, significantly less than the 10,000 number. Some do quite a bit more, and for them 10,000 steps might not be much of a target. But if you push too hard, too soon, you might be going beyond what is healthy.

So what do official sources say?

Well, that really depends on which official source you go to. The Department of Health and Human Services recommends at least 150 minutes a week of moderate aerobic activity or 75 minutes of vigorous activity. This equates to roughly 7,000-8,000 steps per day. The UK National Obesity Forum suggests 7,000 to 10,000 steps a day as a target. Japan’s Ministry of Health, Labour and Welfare recommends a daily walk of 8,000 to 10,000 steps.

Sometimes overlooked as a form of exercise, walking can improve your health, help you build stamina and burn excess calories. Generally speaking, the more activity you do the better. But if you’re not very active, you should build your steps gradually, by adding a few more every so often. Most important of all, do listen to your body, your doctor and common sense, rather than blindly chasing targets.