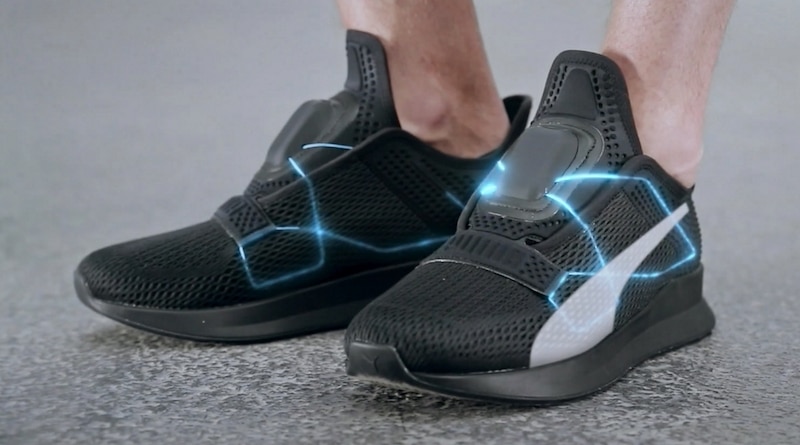 Puma has unveiled today a $330 self-lacing sneaker called Fit Intelligence (Fi). The shoes follow in the footsteps of Nike’s Adapt BB, which are set to launch later this month.

The German athletic apparel and footwear brand is offering fans the chance to beta test the product ahead of its official launch in the Spring of 2020. Some 20 lucky members of the public will be chosen along with a few others such as Formula One star Lewis Hamilton. You can apply to join in the fun by downloading the Pumatec app.

“The product is working, we’ve got it functional but we really want to have some additional learning before we bring it to market.”

The lightweight shoe is designed for workouts and running. Unlike the $350 Nike Adapt BB which tighten automatically, a user will need to swipe up on the small motor located on the boot’s tongue. The laces, which tighten or loosen the grip around the foot, are concealed inside the lining. They apparently learn to adapt to the shape of the wearers foot over time.

Blue LEDs will light up as the shoes tighten. To untie and remove them, the wearer will need to swipe in the opposite direction. Just like the Nike sneakers, all this can also be done by using a smartphone app. The other alternative is the Apple Watch, which connects to the shoe through a bluetooth connection.

All this is powered by a motor hidden inside the insole. Puma says the battery can run up to a week on a single charge. When there no juice left, the shoes can be refuelled by placing them on a wireless charging plate.

These are actually not Puma’s first self-lacing shoes. Fit Intelligence represents an evolution of its AutoDisc line, which launched some three years ago.

Last month the company brought back what many consider to be one of the world’s first smart fitness wearables – the RS-Computer Shoe. To better track your fitness Puma slapped on modern tech to the footware, in the form of a three-axis accelerometer, memory to store 30 days worth of workouts, Bluetooth connectivity and a USB port for charging.

Fit Intelligence will make their public debut in just over a year’s time. We will update you, of course, as the launch draws closer.