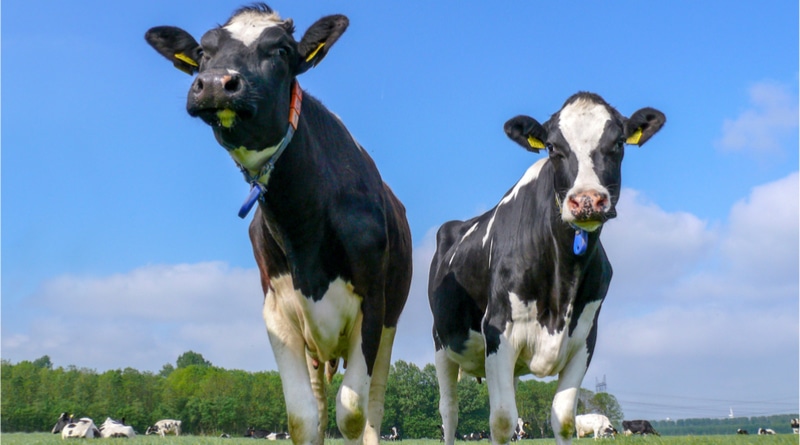 British cows are the first to get 5G biometric wearables. Farmers will use them facilitate the milking parlour of the future.

As reported by Reuters, the technology was developed by Cisco Systems. It consists of intelligent cow collars which communicate with the milking shed via 5G. When the cow feels ready to be milked, it will approach the machine gates which will automatically open. The device then guides the cow to the robotic milking system and rewards it with food.

A herd of Friesian dairy cattle at a British farm in Shepton Mallet, in South-West England are the first to trial the system. Around 50 of the 180-strong herd have been fitted with the technology. This also includes health-monitoring ear tags that can alert to signs of distress.

The £1.36 million farm of the future has been developed by UK government-funded Agricultural Engineering Precision Innovation Centre (Agri-Epi Centre). Gadget loving cows also get to enjoy automated brushes, a smart feeding system and sensor-operated curtains that open depending on the weather.

You think this is strange? Well, get used to it as its only a taste of things to come.

5G is the next generation of mobile internet connectivity. It will go way beyond the smartphone, tablet and computer. Pretty soon everything around us will be connected. From agriculture, to telemedicine, self-driving cars and smart cities.

The internet speeds will be staggering. It is estimated that 5G will offer 100 time faster downloads than 4G and about 10 times faster than broadband. The technology will also create necessary bandwidth to create the “Internet of Things”. It will usher us into the post-smartphone era.

“We are testing the ability of 5G to transmit the data from our sensors much quicker, and not via the farm’s PC and a slow broadband internet connection,” said Duncan Forbes, Project Manager at the Agri-Epi Centre.

“And the significance of that is it means that this sort of technology could be taken up … not just on farms but on rural communities right across the country.”

The bad news is that while the cows get to pioneer the technology, 5G is still a while away for most humans. In the US it has started to roll out last year but coverage is limited to a handful of cities. Other countries, including the UK, Germany and China are actively working on deploying 5G. 2020 is probably the year when it will really start to take off.