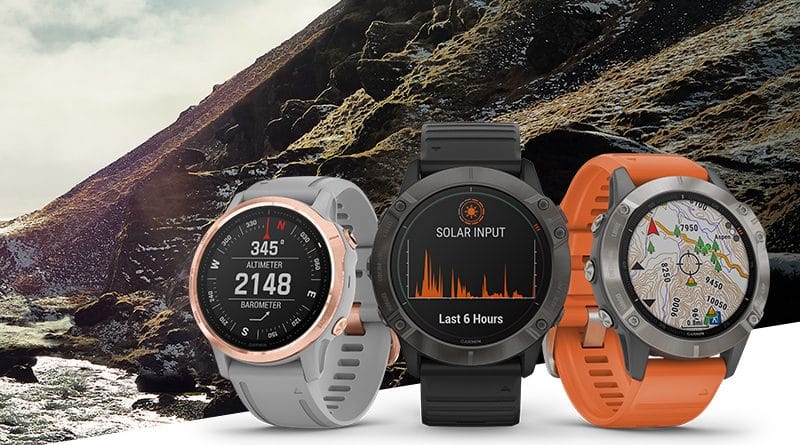 Garmin has just updated its Fenix range. The latest iteration looks better, its more feature-packed and has some interesting power options. Fenix 6 builds on the special incremental edition, Fenix 5 Plus, which was released about 14 months ago.

These are watches for outdoor adventurers and sports enthusiasts. They come in a number of different models – six for Fenix 6 and three each for Fenix 5 Plus and Fenix 5. The daddy of the bunch is the Fenix 6X Pro Solar Edition.

If you’re serious about your athletic pursuits, you won’t go wrong with a Garmin sports watch, particularly one from the Fenix line. But the wide variety of choices makes it all the more difficult to choose the right one for you. We’re here to help.

Garmin Fenix 6 vs Fenix 5 Plus vs Fenix 5: General and design

When it come to design, there are quite a few similarities but also some important differences to be aware of between Fenix 5, Fenix 5 Plus and Fenix 6.

They all come in three different sizes, the regular (base) version, an S version and an X version. The S is Garmin’s line designed with the female sports enthusiast in mind. It sports a smaller footprint for smaller wrists without compromising on the multi-sport features. The X packs even more functionality and battery life, but sacrifices the small form-factor.

Although the actual dimensions of the three size options are similar across the 5, 5 Plus and 6, the thickness varies. To keep it simple, let’s just say the latest range is the thinnest of the bunch.

Fenix devices are built from stainless steel or titanium (depending on which version you choose). The weight ranges quite a bit, from 58 grams to 93 grams. You can also pick up more pricey Sapphire editions of the watches. As its name implies, this last one features scratch-resistant sapphire faces.

Fenix 6 also introduces a Pro variant. The base model comes without music, maps and WiFi (which you get on the Pro and Sapphire editions). The 6X does not come in the lower spec base model but, as mentioned, it introduces a Solar model for the first time on a Garmin watch.

Garmin has managed to increase the screen size of the watches over the years whilst keeping the case diameter the same. A bigger screen means more room to view your notifications, maps and training data. For the Fenix 6 range, the base and 6X variants have grown to a 1.3 inch face (up from 1.2 inches on 5 Plus) and 1.4 inch face (up from 1.3 inches on 5 Pus). You can find the exact dimensions of the others in the table below.

All watches have excellent water resistance. The Fenix 6 and 5 Plus models 10ATM and Fenix 5 5ATM. For most people it will not make much of a difference whether their watch is 5 or 10 ATM.

Battery life again varies across the different devices. If we look at the base models for each of the three, you get slightly more bang for your buck from Fenix 6. It keeps going for up to 14 days in smartwatch mode and 36 hours with GPS switched on. More interestingly, the Fenix 6 also comes with customisable power-management modes. Tweak the settings and the watch will show you exactly how much battery life (in hours) the watch has left.

The headline news is the Fenix 6 solar variant. It comes with a transparent solar charging lens that sits on top of the watch face. This converts the sun’s rays into energy which provides you with an additional 10-15% (roughly) battery juice.

On to the sensors.

The Fenix 6 upgrades the heart rate sensor to the latest Garmin ELEVATE heart rate module. This should help with accuracy. Other than that, it also comes with the PulseOx sensor. On the 5 Plus range only the 5X Plus comes with the PulseOx sensor. For those not in the know, this keeps tabs on your blood oxygen, mostly at night although you can take readings on demand during the day. Other sensors are pretty much the same.

The Fenix 6 (Pro and Sapphire editions) and 5 Plus also come with built-in storage and play controls for music. This has enough room for between 1,000 and 2,000 songs (depending on the model). Plus they have Garmin Pay. You don’t get music or Garmin Pay on Fenix 5.

Here’s a table illustrating the design differences between the Fenix 6, Fenix 5 Plus and Fenix 5. We threw in the Forerunner 945 as well. Because why not?

Garmin Fenix 6 vs Fenix 5 Plus vs Fenix 5: Activity tracking features

These are watches that track pretty much anything you can think of, from snowboarding to kayaking. Built for those serious about training, they also come with a multitude of advanced physiological features. So let’s jump right to the differences.

The Fenix 6 is currently the only out of the three to have Garmin’s new Body Battery function. Its aim is to help people make better training, rest and sleep decisions. The feature uses a combination of stress, heart rate variability (HRV), sleep and activity data to give you an indication of your body’s energy levels.

The latest Fenix range also has some other performance metrics you won’t find on the predecessor devices. Vo2Max and training status are now adjusted for heat and altitude acclimation status. Your performance metrics will no longer be influenced by environmental factors. There’s also Training Load Focus and Training Effect labels. The Forerunner 945 is the only other Garmin watch with these features.

The Fenix 6 is also the only of the three to feature Incident Detection and Assistance. When an incident is detected the app will send an automated text message and email with your name and GPS location to your emergency contacts.

For the first time on a Garmin watch, there’s also something called Dynamic PacePro. This is “grade-adjusted pace guidance throughout your activity”. It adjusts a runners pace based on terrain – the steeper the grade, the larger the adjustment. PacePro coaches you in real time so you can slow and speed up your run depending on your goal and race plan (which you set ahead of time).

Here’s a run-down of the differences when it comes to activity tracking.

Garmin Fenix 6 vs Fenix 5 Plus vs Fenix 5: Verdict

The Garmin Fenix range is the ultimate outdoor adventuring device. Ideal for those who only want the very best sports watch on their wrist.

You can choose between multiple models that vary in size to fit every wrist and every workout. The watch features most things you would want for fitness training plus feature sets for outdoor navigation.

Obviously, the higher up the line you go the more features you get. It all comes down to how much money you are willing to spend.

While the Fenix 5 Plus will suffice for most, many will want to have the latest gadget on their wrist. The Fenix 5 is probably worth amiss now, unless you are after a bargain. The other option is the Forerunner 945. It comes with most activity tracking features of the Fenix 6 but at a lower price. The sacrifice is the build of the device, which is not as premium.

3 thoughts on “Garmin Fenix 6 vs Fenix 5 Plus vs Fenix 5: how the models compare”