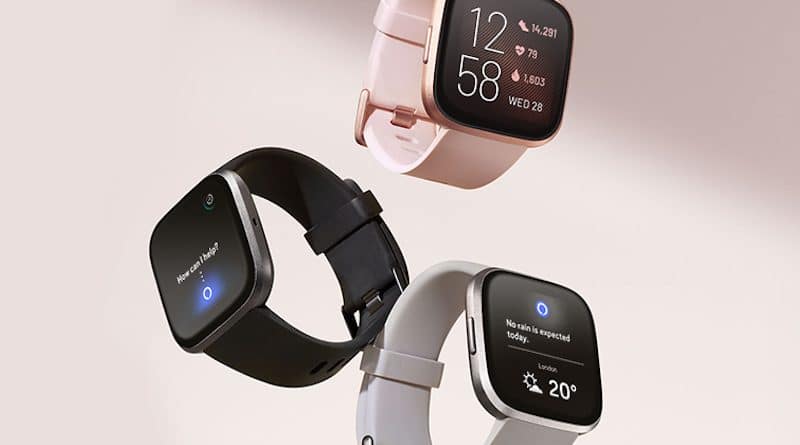 Fitbit has just updated its Versa range. There are three devices to choose from now including the Versa 2, Versa and Versa Lite. Granted, the company will phase out the original model as indicated by the removal of the tracker from its website. Nevertheless, Versa will still be around on various retail outlets, until stocks last. This means you will probably be able to pick it up with some hefty discounts.

And what about Versa Lite? What will you miss out on if you purchase the stripped back iteration? If you’re wondering which of the three best suits your needs we’ve pulled together this specs comparison.

When it come to looks, there are quite a few similarities but also some differences to be aware of between the Versas.

As can be seen from the images, just like Lite, Versa 2 comes with only one physical power/wake button on the left. The two buttons on the right have not made the cut again. So on these two all navigation is done by swiping and tapping on the screen. On the original you can also use the two physical buttons.

The three watches are made of 6000 series aerospace-grade aluminum and come with the same square-ish display. However Fitbit has increased the screen size for the latest iteration whilst keeping the dimensions of the device the same. It has also upgraded it from LCD to AMOLED. This means it should be easier to read everything, especially in bright outside conditions and while exercising. The bigger, more high-res screen is probably the biggest distinguishing design factor of Versa 2.

Under the hood the smartwatches share a 3-axis accelerometer, 3-axis gyroscope, optical heart rate monitor, ambient light sensor and vibration motor. Versa and Versa 2 also come with an altimeter for counting floors, a wi-Fi antenna (802.11 b/g/n), on-board storage for music and NFC for contactless payments (some versions of Versa). Oh, and there’s the SpO2 sensor. We’re told its finally be going to be put to use, so keep an eye out for that in the coming months.

Versa 2 also has a built-in Microphone. But more on that later.

There’s no built-in GPS on any of them. Don’t look for it, it’s not there. A bit of a disappointment as many were hoping Fitbit would add it on to Versa 2. But all three models come with Connected GPS so can tap into your phone’s satellite signal for those runs and cycle rides.

Battery life is not bad. The first two models come with around 4 days of battery juice. The latest version comes with one day extra. This will come in useful if you choose the new always-on display option. Mind you, it will probably drain the battery fast if you opt to use it.

There’s also water-resistance down to 50 meters for all three. Nice. Its worth noting, Lite doesn’t do lap-tracking during swim workouts.

The original Versa comes in a number of case colour options including Black, Rose Gold and Silver. Lite, on the other hand, comes in Marina Blue, Mulberry and Silver. There are various bands to choose from, which are interchangeable and backwards compatible. The newest Versa 2 comes in choice between Carbon, Mist Grey and Copper Rose.

All of these watches will have you covered when it comes to monitoring your steps, distance, sleep, exercise and more. After all, this is what Fitbit is best known for. But while there’s nothing really to separate the fitness features on the Versa and Versa 2, you do miss out on some things with the Lite version.

The most obvious one is a floor count due to the lack of an altimeter. Also, while Fitbit Coach provides on-screen workouts on Versa and Versa 2, the on-screen sessions won’t run on Lite. Fitbit has announced a at-a-glance sleep score, more in-depth sleep tracking, a smart wake mode and comprehensive insights into kip time but this is coming to all three devices.

There are a few non-fitness features, too. This includes notifications (calls, texts, calendar events push notifications from your favourite apps) and an app store. But this is where smart functionality stops for Lite.

The other two also come with 2.5GB built-in storage for music. This is enough for around 300 songs and is an important point in its favour. Spotify, Pandora and Deezer all play nice with the smartwatch. This gives access to millions of songs.

There’s also an NFC chip which stores credit card information so you can leave your wallet behind. This is available on all editions of Versa 2 and the Special Edition of the original Versa.

Finally, Versa 2 comes with a built-in microphone, a first for a Fitbit. You are able to ask the watch for weather reports in your area, it will provide you with smart home control and more. The company is hoping this will be an important selling point. We think it’s a nice feature, but it won’t make much of a difference to most. Those with and Android phone will also be able to use the microphone to reply to texts and notifications with custom voice replies.

All three Versas are fully featured fitness watches which pack a lot under the hood. You won’t go wrong with any of them.

The Lite version misses out on some functionality, though, This includes an altimeter for counting floors, on-board storage for music, NFC for contactless payments, guided workouts on-display and lap tracking for swimming.

The main reason for choosing Versa 2 over the original Versa is the bigger, more high-res display. You also have an always-on option, slightly longer battery life and some extras such as Alexa built-in.

The fact that the Lite has cut some corners means that it sells for around $160 on Fitbit’s website. The Versa 2 will set you back $200. Interestingly, this is pretty much the same price as the original. So the only reason to choose Versa over Versa 2 are hefty discounts will you will inevitably see over the coming months.

4 thoughts on “Fitbit Versa 2, Versa or Versa Lite: what are the differences?”