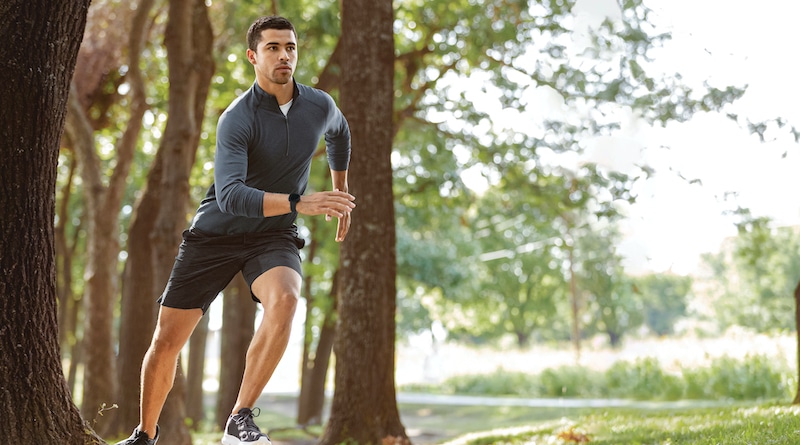 Fitbit has probably launched its full lineup for 2020. Amongst the new devices are Versa 3 and Charge 4. If you’re interested what you get with each, keep reading.

Versa 3 was unveiled in late August. It is an updated version of the company’s best selling smartwatch. Charge 4 has been around for a few months now. It is a refreshed edition of Fitbit’s best selling fitness band. Both of these bring built-in GPS to the table. But what else is new and which should you get?

The fundamental difference between Versa 3 and Charge 4 is that one is a smartwatch the other an activity band. That’s glaringly obvious. Hence, the design is totally different.

Fitbit has stuck to a tried and tested look for the last few years. Both Versa 3 and Charge 4 are no exception. Put them next to their predecessors and you’ll struggle to tell the difference.

Starting off with Charge 4, the core unit measures 35.8mm x 22.7mm and is 12.5mm thick. Just like before, the display is grayscale with a bezel around the sides. All of this is attached to a silicone band although you can easily swap this around for other options including some third-party ones. This is the case for pretty much all Fitbit wearables. 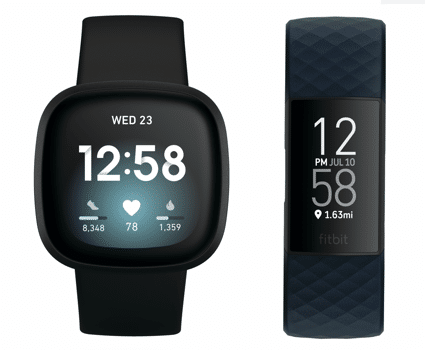 Versa 3 is also an iterative upgrade so the look has remained the same. Which is not necessarily a bad thing as the design is very functional. The main difference is that the screen is bigger now coming in at 40.48 mm x 40.48 mm versus 39.8mm x 39.8mm. It’s not a huge difference but Fitbit has shrunk the bezel on the sides which has allowed for the slight increase.

Put it next to Charge 4 and you will immediately notice how much easier it is to read. This is especially the case during exercise. The display also has better resolution than Charge 4 (336 x 336 pixels vs 100 x 150 pixels) and it’s AMOLED.

What’s unchanged is the navigation. You make your way around the screens on both of these by combining the touchscreen with the physical button. For Charge 4 there is one inductive button on the left. Unlike its predecessor which had a physical button, Versa 3 has also taken this route.

As far as sensors there’s not much to separate the two. They both have a 3-axis accelerometer, 3-axis gyroscope, optical heart rate monitor, altimeter, PulseOx, vibration motor and an NFC chip for contactless payments. Versa devices also have a temperature sensor but more about that later.

The big news for both of these devices is the built-in GPS. Until 2020, the aging Ionic was the only Fitbit device with the functionality. But the addition of GPS means their price is slightly higher as compared to their respective predecessors.

As you’d expect from Fitbit, both water-resistance and battery life is decent. The first is 5 ATM so you can wear it worry free around the clock. As far as battery life, Charge 4 can keep going for around a week and Versa 3 a day less. This, of course, drops dramatically with GPS switched on. One thing in Versa 3’s favor is that only 12 minutes on the charger will top it up for 24 hours.

Here’s a table showing all the important specs.

We are not going to waste any time going over the fitness tracking functionality. Fitbit has this area well covered. Both of these devices will have you covered around the clock and track a plethora of sports.

The benefit of getting the latest generation wearables is that you get the above mentioned built-in GPS. This is useful for those who run or cycle outside as it means they can leave their phone behind and still get detailed stats, maps and other info on their workouts.

Having said that, if you don’t mind carrying around your phone with you it might be an idea to save a few bucks and go for Charge 3 or Versa 2. As the other functionality is pretty much the same.

If you’re in two minds about Charge 4 and Versa 3, the screen is an important consideration. Sure the two wearables might dish out a lot of the same data, but you’ll actually be able to see it in the middle of the run on the larger display of Versa 3. It is much easier on the eye.

This also has the benefit of showing more info at the same time, on-screen exercises, workouts from earlier days and more. Versa has an optional always-on screen option which some might like. You won’t find this on Charge 4.

Some other differences worth pointing out come with a premium subscription. Unfortunately Fitbit has placed this behind a paywall. If you want access this will cost you $9.99 per month or $79.99 per year after the free 3 month trial run expires.

Below is a little table illustrating the extras – not only for Charge 4 and Versa 3 but also for other devices in the range.

To avoid confusion, despite not being on the list, Charge 4 does show blood oxygen (SpO2) data. But with a Premium Subscription on Versa 3 you can view weekly and monthly trends.

The bigger difference is the temperature sensor. Fitbit’s new Health Dashboard lets you access your skin temperature readings with a Versa 3. These are taken during the night at regular intervals and the app pits it against your baseline. This is useful for detecting at an early stage if you are coming down with something.

As far as non-fitness functions Versa 3 is the clear winner. Not surprising as unlike Charge 4 it is a smartwatch. What’s common to both is that they’ll show notifications, allow users to accept or reject calls, and let them make contactless payments via the NFC chip.

However, Versa 3 has a wide choice of apps you can install, in addition to Amazon Alexa functionality and the ability to send voice replies. Finally, it also gives access to Pandora and Deezer. Charge 4 owners will be happy to know that Spotify control is available on both.

The biggest difference between Versa 3 and Charge 4 is the look. One takes the shape of a smartwatch, the other a fitness band. Hence, this will be your most important consideration.

The large display on Versa 3 will appeal to many. It is full color, high-res and unlike Charge 4 you can actually read it in the middle of a run or cycle. But if you prefer something more discreet Charge 4 is the obvious choice.

Particularly considering that very little separates the two in terms of sensors. The biggest upgrade to both is the built-in GPS. Pretty much the only extra that you get with Versa 3 is the temperature sensor. But you will need a Premium Subscription to access its readings.

So it really depends on what you are after. If you’re after a smartwatch experience Versa 3 also has hundreds of apps you can install, Alexa control, offline storage for music, voice replies and more. For others, Charge 4 is a great choice. It is also much cheaper than Versa 3.