Apple has just concluded its annual September event at Apple Park. Unlike the previous years, this one was entirely held online. Noteworthy announcements include the unveiling of Apple Watch Series 6, Apple Watch SE and new iPads. The next iteration of the iPhone will be announced separately.

Of most interest to us was the launch of the upgraded Apple Watch. This time last year we saw the release of the Series 5 device. Its main innovation was the always-on Retina display. Here’s what we got this year.

In addition to everything from the Series 5 watch, Series 6 owners will get blood oxygen readings, an improved S6 chip, a brighter always-on Retina display and more. Plus let’s not forget everything that comes as part of watchOS 7. Most notably, this includes sleep statistics for the first time.

The headline feature in 2020 is the new SpO2 sensor. The LEDs shine red and green infrared light on the back of your wrist to determine the level of oxygen in your blood. The actual calculation is done via photodiodes that measure the amount of light reflected back.

Readings can be taken on demand through the new blood oxygen app. It takes about 15 seconds to complete a measurement. The device will also take occasional readings while you sleep and record them in the smartphone app.

As expected, Series 6 comes with a new dual-core processor which is 20% faster than before. This allows for an even better always-on display that is 2.5x brighter when your wrist is down. It also allows for an always-on altimeter for continuous elevation readings throughout the day.

A new strap option is now available that works like one continuous piece – no loop or clasp of any kind. It’s swim-proof, durable and available in a range of sizes and colors. In addition to a silicone, there’s a braided option, a leather one and an Apple Watch Nike iteration.

As part of watchOS 7, Apple talked about something called Family Setup. This allows you to use your phone to setup watches for other family members.

The goal is to provide greater independence for kids and older parents. Safety and communication features will keep them connected with the ability for you to specify safe contacts. There’s also an option for automatic location notifications.

Apple Watch Series 6 can be pre-ordered from today starting at $399. Availability begins this Friday.

This one uses the same display as series 6. Inside is a S5 chip for up to 2x faster performance than Series 3. Most of the other specs are the same as Series 3.

Series SE starts at $279. There’s a cellular and non-cellular model to choose from. Apple will continue to sell Series 3 for the foreseeable future starting at a very affordable $199.

WatchOS7 was officially announced back in June. It comes with a host of exciting updates.

Amongst these is native sleep tracking. Yes, your Apple Watch is finally able to track your nightly rest. It was a long time coming and a glaring omission up to now.

In addition to information on sleep phases, length of sleep and more, users will be able to set up sleep goals and get suggestions for improving nightly rest. This also slaps on something called Wind Down, a feature developed by Apple to ease you into slumber by minimizing distractions. 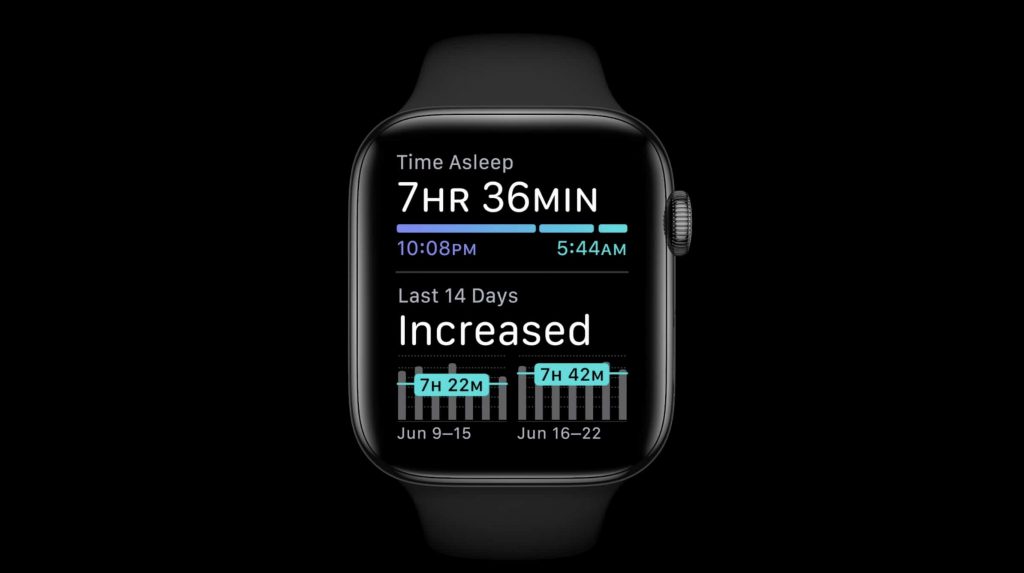 There’s an alarm function which wakes you up via a silent haptic alarm or sound. When you are up, your watch will show the current battery level so that you can place the device on a charger if needed.

Other improvements as part of WatchOS7 include a hand washing reminder and cycling directions. The first monitors your hand movements and listens out for audio confirming you are washing your hands. When it determines you are doing so, the hand washing screen will switch on with a 20 second countdown.

It’s worth pointing out, two Apple Watch models running watchOS 6 will not get the update. These include Apple Watch Series 1 and Apple Watch Series 2. You can learn more about this and other watchOS 7 functionality (such as Vo2Max) on this link. The new version of the operating system will be available to all on September 16.