Did you know that you can automatically sync your Fitbit activities to Strava? Here are the step-by-step instructions on how to do this. This will work on any device you use, regardless whether you are on a computer, iPhone, iPad or Android. Whatever it is, it’s going to be the same procedure.

Why would you want to connect to Strava?

The obvious question to start with is – why in the world would you want to link your Fitbit and Strava counts? Doesn’t the Fitbit smartphone app provide more than enough information?

For many people that might be the case, but those who are very serious about their running and cycling may want more. Strava offers some additional functionality that could appeal to them – as well as others who like Strava’s excellent social aspect.

The platform has been around since 2009. In the space of just a decade, it has amassed a whopping 73 million users. Some 2 million new ones join each year!

They use it use to record their activities, to see how they stack up against others, and to share photos and highlights of their adventures. More than 4 million photos are shared every week through the platform, with 85 million comments and Kudos given by Strava athletes per week.

You can check our coverage of Strava’s 2020 review. This shows that we have been exercising more than ever despite the pandemic.

Some 3 billion activities which have been logged on the app since the platform was launched just over 10 years ago. The first billion was reached in 2017, demonstrating the rapid growth of the company in recent years. The 2 billion milestone was hit in late 2018. As you’d expect, cycling and running are the most popular activities accounting for the bulk of uploads.

Strava can be downloaded for iOS and Android for free. The software works across 300+ compatible mobile phones and GPS devices. A Strava Summit summit subscription which adds additional features runs at $59.99 per year.

Fitbit and Strava integration has been possible since 2015. This is when Strava introduced this as Beta, before proceeding to a public release a bit later on.

How to Connect Fitbit and Strava?

So you’ve decided to connect your Fitbit and Strava accounts. Well done. It is not difficult at all to do this. The procedure simply consists of giving the necessary permission to the two platforms to talk to each other.

Presumably you already have a Fitbit account. If you don’t have a Strava account, go and open it. A freemium subscription will suffice just fine for the purposes of syncing to Fitbit.

The authorisation with Fitbit can be done from the Strava mobile app or its website dashboard. On the first, simply go to Settings > Applications, Services, and Devices. Then Choose “Connect a new device to Strava” and then select “Fitbit”. Then click “Connect” and follow the instructions to finalise the link.

For some, an easier way to do this might be via an internet browser. Simply go to http://strava.fitbit.com/ and click on “Connect”. You’ll then be prompted to enter your Strava username and password. The final step is to click on “Authorize” and enter your Fitbit login details. You’ll also be presented with several tick-boxes which you can read through and decide whether to approve or not. Job done!

What activities will sync?

How to import historical activities?

Unfortunately the same is not the case for historical activities. Luckily there is a way around it which sounds like a bit of a hassle – but it really isn’t.

What you’ll need to do is upload old activities to Strava directly. This is done by exporting them from Fitbit and the importing them into Strava. The files need have the Training Center XML (TCX) moniker, which displays GPS data as activities.

To access this go to the Fitbit website dashboard and choose Log>Activities (you can also do this via the mobile app). Find the activity you would like to export and choose “View Details”. Click the 3 dots as shown in the image below and choose the “Export as TCX” file option. TCX files only show data for exercises that use GPS.

Save the file to your computer and then upload it via the import screen on Strava. To save time you can import multiple TCX files simultaneously.

It is important to stress, activities with no GPS data will not sync to Strava. The same is the case for duplicate activities. Strava will simply choose which of the duplicates to include.

It works the other way around

Just like Fitbit syncs to your Strava, it works the other way around. Runs and rides tracked with. Strava will make their way to the Fitbit app. They will appear as manually tracked activities and will contribute to your daily goals, calories and more. The only caveat is that GPS and heart rate data tracked via Strava will not sync to your Fitbit account. 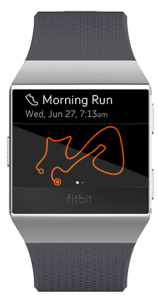 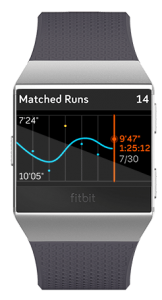 There’s also a Strava app that you can install on your smartwatch. It’s cute but not too useful. All it will do is allow you to view activities you track through the Strava app on your phone. It is much easier to do this via the Fitbit smartphone app.

What to do if Fitbit and Strava are not syncing?

In a perfect world everything will work 100% of the time. But we all know that’s not the case.

If you find that the connection between the two platforms is not working, try reconnecting the accounts. Then sync your Fitbit tracker and wait at least one hour. This is because it might take a little while before Fitbit activities make their way over to the Strava platform.

It’s also worth checking the status of both. Downdetector is a useful website that will allow you to do this quickly. Services do occasionally go down.

Also, confirm that you are recording a GPS exercise with your Fitbit. As mentioned above, only these will sync to Strava. Also check that you have already not uploaded the activities – as duplicates won’t sync.

And remember, don’t wait around for historical exercises to sync. Only those tracked after you’ve linked the accounts will make their way over automatically to Strava.You can use the TCX export from Fitbit to upload older exercises manually.