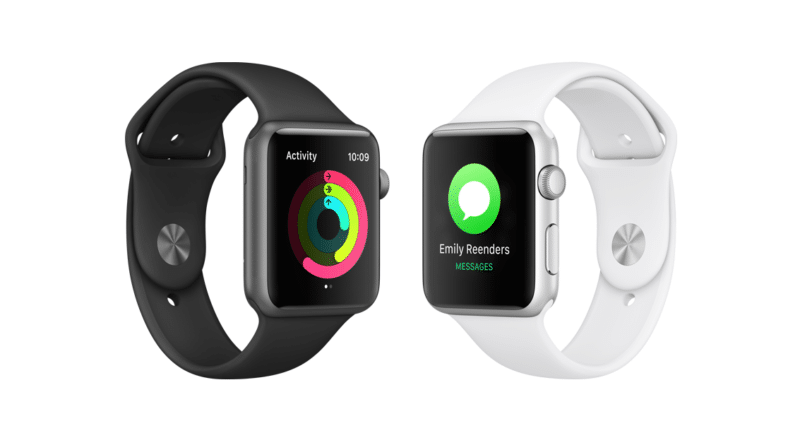 The fourth quarter of 2016 marked a return to growth for the global smartwatch industry with Apple dominating shipments, according to latest research from Strategy Analytics.

Some 8.2 million devices were sold in October, November and December, the first quarterly increase since since the start of the year. With a 63% marketshare Apple Watch was by far the most popular smartwatch of the holiday season, while Samsung maintained second position. Combined together, Apple and Samsung were a long way ahead of the pack, and together accounted for an impressive 3 in 4 of all smartwatches shipped globally.

The return to growth was largely a result of new product launches and stronger seasonal demand in major developed markets. For the year as a whole, global smartwatch shipments increased by 1% to a record 21.0 million. 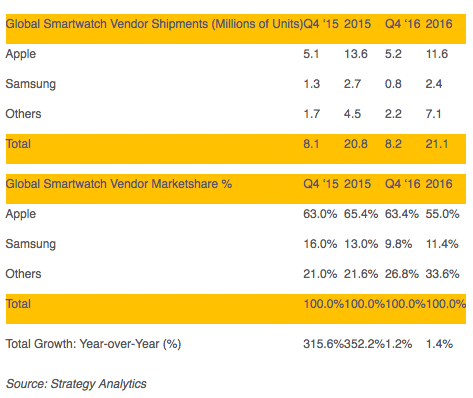 Apple does not disclose sales figures for its Apple Watch. Instead it lumps the wearable into the “other products” category that includes devices such as the iPod and Apple TV. But in early December, Tim Cook said “Sales growth is off the charts. In fact, during the first week of holiday shopping, our sell-through of Apple Watch was greater than any week in the product’s history. And as we expected, we’re on track for the best quarter ever for Apple Watch”.

According to Strategy Analytics, the Cupertino outfit shipped a record 5.2 million smartwatches in Q4 boosted by demand for its new Watch Series 2 as a holiday-season gift. The company’s latest smartwatch delivers solid improvements over its predecessor, including water-proofing up to 50 metres, on-board GPS, a 50% faster Duel-Core processor, a better display and a few other updates.

Despite a return to growth in Q4, Strategy Analytics warns of further hurdles ahead for the smartwatch industry.

“The smartwatch industry is showing tentative signs of recovery this year, but it is not fully out of the woods just yet and there remain several barriers to growth that must be addressed,” said Cliff Raskind, Director at Strategy Analytics.

“Smartwatch vendors like Samsung need to launch more exciting or cheaper models, Apple must engage closer with mobile operators to stock or subsidize its popular Watch portfolio, while component makers need to develop more accurate sensors for health and fitness tracking that consumers will trust and use more.”