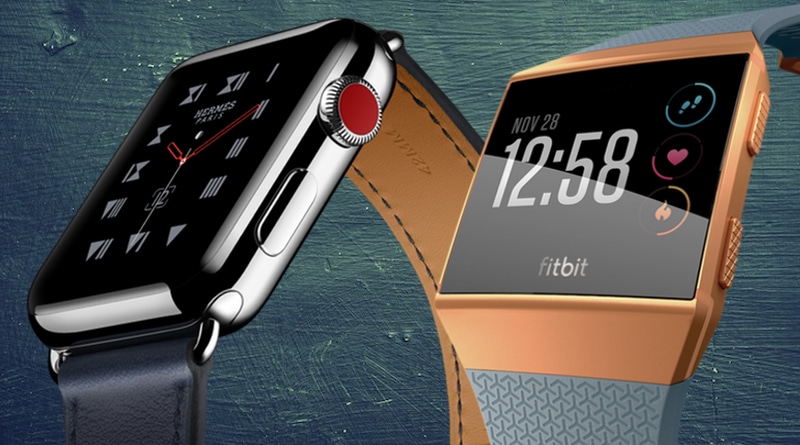 The launch of a number of devices by leading brands have made the past month a big one for wearable technology. Arguably the most anticipated of the lot were Fitbit Ionic and Apple Watch Series 3.

Fitbit’s first fully fledged watch comes with a host of sensors, contactless payments, local storage, smartphone notifications and more. The big news with Apple’s third generation device is cellular connectivity. This means you are able to make and receive calls, as well as messages, while away from your smartphone.

The two smartwatches are now going head to head, competing for pretty much the same market. Here is how they stack up against each other.

Ionic looks very much like the Blaze. So much so, that at first glance its actually difficult to tell the difference. Its only when the screen springs to life that differences start to become noticeable.

The core unit is built from strong and lightweight 6000 series aerospace-grade aluminum. The high-res LCD touchscreen is very vibrant and easy to read. To compete with the Apple Watch, Ionic sports increased pixels and amplified brightness up to 1000 nits.

Its easy to navigate the display. This is a combination of the three buttons on the sides (one left and two right) and the touchscreen. After a bit of practice, you learn how to whizz through the stats.

The Apple Watch 3 looks very much like the Apple Watch 2. Apart from the red dot on the crown, there is actually very little to tell the two apart. The case is the same size, the only difference being that the back crystal is slightly extended (0.25 millimeters). We wouldn’t have even noticed if Apple hadn’t told us.

Its screen is bright and the graphics are very sharp. There is a wide variety of styles and colours to choose from, with casing including aluminium, stainless steel and a new ceramic edition which is four times harder than stainless steel.

The displays on Fitbit’s and Apple’s watch have a lot in common. They are both square and full-color, though you get a bit more screen real estate on the Apple Watch. In terms of aesthetics, we would put Apple’s device slightly ahead. Ionic with its retro 1980s look is not going to win any design awards. Neither is Apple for that matter.

Under the hood there are a few differences. Both trackers share an optical heart rate monitor, 3-axis accelerometer, gyroscope, altimeter, vibration motor and ambient light sensor. Fitbit Ionic also comes with a digital compass and something Fitbit calls a relative SpO2 sensor. This measures blood oxygen levels and could be used to identify sleep apnea in the future.

Apple’s Series 3, on the other hand, comes with cellular connectivity which is apparently built into the display itself. The watch uses the same number as your smartphone. Although users still need a SIM, the Series 3 features a small electronic SIM card. Unfortunately, this comes with an on-going monthly fee.

In terms of processing power, Apple’s third generation watch comes with a 70% faster dual-core processor. This enables Siri to talk for the first time in addition to just listening. There is also a W2 chip for Bluetooth and Wifi connectivity which allows for a 85% faster connection while being 50% more efficient.

Fitbit does not disclose information on its processors. Without specific details we can’t make an actual comparison, but its probably safe to assume that Apple Watch Series 3 has more processing power. As for storage, you get 4GB with the Ionic, 8GB with the basic Series 3 watch, and 16GB with the cellular version.

Both timepieces have a rechargeable Lithium battery. Ionic leaves the Series 3 watch in the dust, though, on this measure. Fitbit’s smartwatch promises a respectable four days of battery life, and less with continuous music playback. Switching the GPS on will reduce it right down to 10 hours.

Unfortunately Apple has not managed to increase battery life. Just like its predecessors, the third generation watch will keep going for up to 18 hours and even less when GPS is activated. This means you will still be charging it every day. Perhaps that was to be expected taking into account the bump in specs.

Both the Ionic and Apple Watch Series 3 have fantastic 5 ATM water resistance rating. No need not worry if they get wet, and they are perfectly capable of tracking your swim sessions.

Ionic is a timepiece that puts fitness first. It can do just about everything an Apple Watch can handle on this measure.

You get all the basics, along with inactivity reminders and automatic activity recognition. In the morning the app will provide you with detailed info on light, deep and REM sleep stages which you won’t get on the Apple Watch. Plus you get a great and very user-friendly smartphone app to go along with your fitness tracker.

Both devices are perfectly capable of phone-free exercising. For outdoor fitness tracking, the built-in GPS will keep tabs on your pace, distance, elevation and split times. In the water they will track your swim sessions too, with lap count, duration and calorie burn.

With WatchOS4, Apple has boosted its heart rate features. You are now be able to see your current heart rate just by raising your wrist, there is the addition of a recovering heart rate, and the watch will alert you when it detects an abnormal spike in your readings. For the first time, the Apple Watch is also be able to tell you your resting heart rate. This is perhaps the most important measure of your health and fitness.

The Apple Watch also now comes with a barometric altimeter sensor so you get info on floors climbed and altitude. A great feature which the company will no doubt take advantage of when it comes to tracking skiing workouts.

As mentioned, the Fitbit Ionic has introduced a new sensor with SP02 readings. This measures the oxygen saturation in your blood, another way to judge fitness. This measures how well oxygen is sent to parts of the body furthest from your heart (such as arms and legs).

Apple has closed the gap on Fitbit when it comes to activity tracking but it is still playing catch-up. While both devices track the basics, have built-in GPS and water-resistance, the Apple Watch has some obvious omissions such as the lack of a native app for sleep tracking. Also, Fitbit has automatic exercise detection and lets not forget, this is a company that has long had the fitness side nailed down.

But the core of Apple’s problem is its battery. With 18 hours of battery life, this remains the single biggest issue and stumbling bloc to the Apple Watch becoming a true 24/7 activity tracker.

This is where Apple shines. With its huge range of smartwatch features, it becomes a natural extension of your iPhone. There is a plethora of native and third-party apps and the upgrade to watchOS4 features Siri, Apple Music streaming, and much more.

Although it can’t really compete with the Apple Watch on this measure, Fitbit’s first smartwatch comes with a few non-fitness features as well. This includes 2.5 GB of local storage for music, access to Pandora, notifications for call, NFC chip for contactless payments, text and calendar alerts, and much more. There is also an app store with a handful of native apps and an open its SDK for third-party developers. It, however, lacks a microphone, handwriting, or voice recognition features.

While the two smartwatches might seem similar, they are actually quite different. Fitbit’s device puts fitness first, smartwatch features second. The Apple Watch is probably the best all-rounder.

The San Francisco manufacturer has been struggling of late and is very hopeful its first smartwatch will reverse its fortunes. When it comes to basic 24/7 fitness tracking, Ionic is probably as good as it gets right now. Plus Fitbit’s timepiece offers a few advantages over Apple’s device such as longer battery life, sleep tracking and a slight advantage in price.

In terms of smartwatch features, however, the Ionic pales next to the LTE-equipped Apple Watch. Apple’s device offers so many other things in addition to being a fitness tracker, its health and fitness features should be viewed as a bonus rather than the main reason for purchase. But Apple’s cellular-enabled watch is pricier and its battery life remains a major stumbling block.