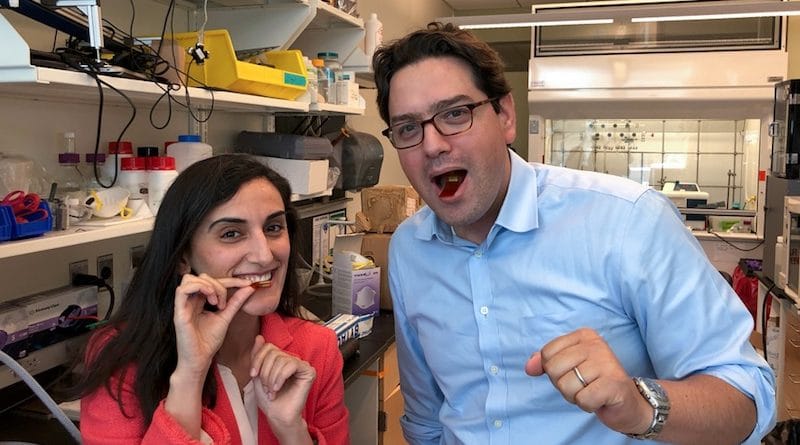 Researchers has developed an ingestible sensor to monitor movements in the stomach.

Built by scientists at MIT and Brigham and Women’s Hospital, the 2 x 2.5 centimeter dissolvable capsule is meant to be rolled up and swallowed. When ingested, it sticks to stomach walls or intestinal linings, from where it can monitor food intake, digestion and help to diagnose gastrointestinal disorders. The device can event distinguish among different types of materials being digested based on the movement of the stomach walls.

The sensor powers itself thanks to piezoelectric material which convert the movement from the stomach into electrical energy. In tests, the current prototype successfully powered itself for 48 hours without degradation. Scientists tested a wired version of the device on pigs, as detailed in the October 10th issue of Nature Biomedical Engineering.

While the device is in early prototype stage, it could point to a future where doctors routinely use it to detect gut movement and other stomach disorders. It could even potentially find use in measuring food intake – an automatic system for counting calories.

“This could help benchmark, in an objective fashion, what is being ingested to help self-regulate,” says Traverso.

“We can make it easier for the individual to recognize what is happening in an unbiased way.”