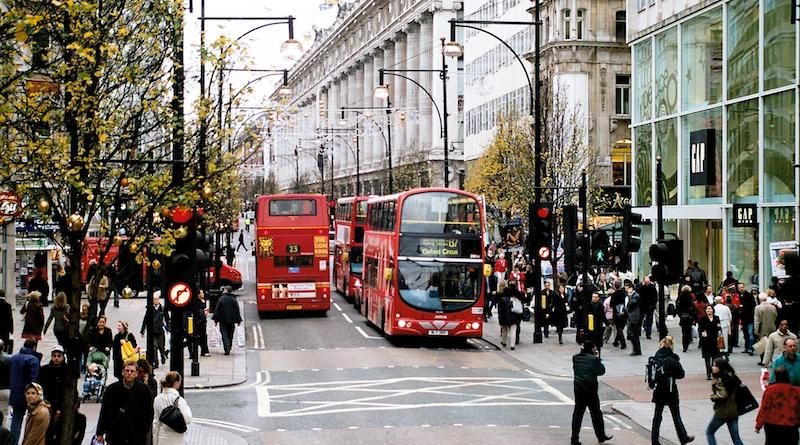 Going for a stroll is often considered as one of the best ways for older people to exercise – but not you are walking along one of London’s most famous roads, new research shows.

A report funded by the British Heart Foundation (BHF) says that if you are over 60, the positive effects of walking in built up areas such as London’s busy Oxford Street are cancelled out by negative effects of breathing in unhealthy air. And pollution, including black carbon, nitrogen oxide and fine particulate matter from diesel engines, is especially problematic if you have a heart problem or chronic lung disease.

It seems that even short-term exposure to unhealthy air cancels out the aerobic benefits of exercise. Researchers from the Imperial College London and Duke University in North Carolina asked 119 volunteers over the age of 60 to walk for two hours in Hyde Park and along a busy section of Oxford Street.

The findings, published December 5th in The Lancet, show that those who walked in Hyde Park saw in an improvement in lung capacity and decrease in arterial stiffness within the first hour. On the other hand, those walking along Oxford Street saw little to no health benefits. It is worth noting that stress could account for some of the physiological differences seen between the two settings.

Previous BHF research has shown that breathing in high amounts of polluted air is linked to an increased risk of heart attack and stroke. And if you have heart failure or atrial fibrillation, unhealthy air could make your condition worse.

“Air pollution contributes to around 40,000 premature deaths in the UK every year, and the extent of its damage to our cardiovascular health is becoming clearer all of the time. Exercise is crucial in reducing the risk of a heart attack or stroke, but it seems dangerous levels of air pollution could be erasing these benefits in older adults,” said Simon Gillespie, chief executive at the BHF.

“When exercising it’s best to avoid highly-polluted areas, swapping them for green spaces or even back streets where pollution is lower. This will ensure you can experience the full benefits of exercise.”

London Mayor Sadiq Khan says he is making battling air pollution one of his top priorities. To this end, toxic air sensors will be set up in over up to 1,000 hotspots around London as part of a new pollution trial.