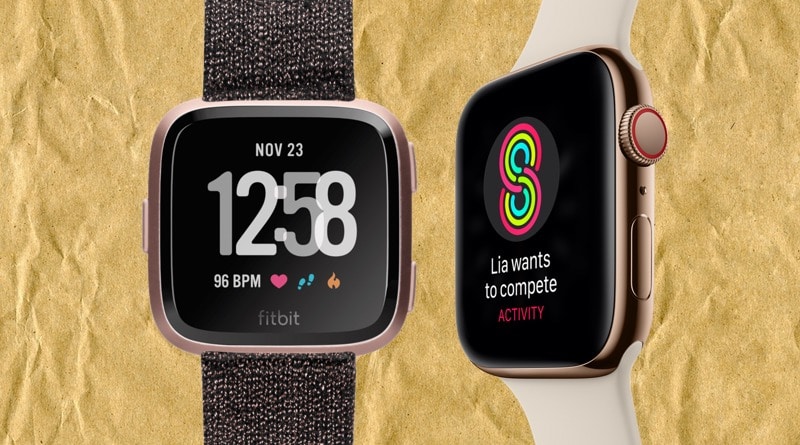 Versa is Fitbit’s second smartwatch. The device comes with most of the sensors you’ll find on Ionic, contactless payments, local storage, smartphone notifications and more. However, with its rounded edges, polished look and more compact form factor, it looks much better. No doubt, Versa has a much better chance of eating into Apple’s leading share of the smartwatch market than Ionic ever did.

With each passing year the Apple Watch is edging closer to becoming your must-have health guardian. Series 4 slaps on a number of new features such as fall tracking, low in addition to high heart rate alerts, irregular heart beat tracking and a built-in ECG sensor. And yes, you still get all the great functionality of the previous generation devices.

The two are going head-to-head, competing for pretty much the same market. Read on to find out how they stack up.

In terms of looks, Versa is not all too different from the Apple Watch. And this is a good thing. We make no secret we are not fans of the blocky design of the Ionic. The company is clearly learning from its Pebble acquisition and this influence is becoming more and more evident.

Versa is smaller, slightly thinner and lighter (38 grams versus 50 grams) than the Ionic which should appeal to the female demographic. The core unit of the watch is built from strong and lightweight 6000 series aerospace-grade aluminium.

There are three physical buttons on the sides, one on the left and two on the right. In combination with the touch-screen, this allows you to navigate through the display. After a bit of practice, you’ll learn how to whizz through the stats.

To compete with the Apple Watch, Fitbit has once again gone with increased pixels and amplified brightness up to 1,000 nits. This is as good as it gets in terms of display quality at the moment and even outperforms some smartphones.

The Apple Watch finally has some bigger design changes. Series 4 sports an edge-to-edge screen with new display technology called LTPO that improves power efficiency. Apple says the screen real estate is larger by 30% on both the 40mm and 44mm version. The actual dimensions of the device are still the same although at 11.4mm, the new device is slightly thinner than its predecessor.

The back is made of black ceramic and sapphire crystal on all versions of the watch. Apple says radio waves can now pass through both the front and back resulting in better cellular reception. Previously most models had a metal back.

All things considered, we would put Apple Watch 4 ahead of Versa in terms of aesthetics and design. But Fitbit’s tracker is decent looking and a big improvement on Ionic.

Under the hood there are a few important differences. Both trackers share an optical heart rate monitor, 3-axis accelerometer, gyroscope, altimeter, vibration motor and ambient light sensor. Versa also comes with something Fitbit calls a relative SpO2 sensor. This measures blood oxygen levels and could be used to identify sleep apnea in the future. We have yet to see it put to real-world use, though.

Apple’s Series 4, on the other hand, comes with built-in GPS. This provides more precise data on pace and distance and allows you to leave your phone behind when exercising outdoors. Versa only has connected-GPS, so needs your phone to be in close vicinity as it taps into its GPS readings.

The other important difference, of course, is the above mentioned ECG sensor. Apple has integrated a crystal electrode on the back of the device and it connects to the digital crown electrode. The Cupertino outfit has also upgraded its accelerometer and gyroscope and these can now sample motion data 8 times faster.

Finally there is also cellular connectivity of the Apple Watch. The Series 4 features a small electronic SIM card. As you’d expect, this comes with on-going monthly fees.

In terms of processing power, Series 4 comes with Apple’s fourth generation SIP called S4. This contains a dual core 64-bit processor customized to bring 2 times faster performance over the predecessor generations. It also has the next generation wireless chip called the W3.

Fitbit does not disclose information on its processors. Without specific details we can’t make an actual comparison, but its probably safe to assume that Apple Watch Series 4 has more processing power. As for storage, you get 4GB with the Versa and 16GB on the Apple Watch.

Both timepieces have a rechargeable Lithium battery. Versa, however, leaves the Series 4 in the dust on this measure. It promises a perfectly respectable four days of battery life, and less with continuous music playback.

Unfortunately Apple is still struggling with battery life. Just like its predecessors, the new watch will keep going for about a day and a half and less when GPS is activated. This means there is no getting away from charging it – a lot.

Both the Versa and Apple Watch Series 4 have fantastic 5 ATM water resistance rating. No need not worry if they get wet, and they are perfectly capable of tracking your swim sessions, too.

Like the Ionic, Versa is a timepiece that puts fitness first. It can do just about everything an Apple Watch can handle on this measure. At least when it comes to activity tracking.

You get all the basics, along with inactivity reminders and automatic activity recognition. In the morning the app spits out detailed info on light, deep and REM sleep stages which you won’t get to that level of detail on the Apple Watch. Plus you get a great and very user-friendly smartphone app to go along with your fitness tracker.

Fitbit’s Purepulse heart rate sensor stores heart rate data at 1 second intervals during exercise tracking and at 5 second intervals all other times. The quality of readings have been upgraded too, as compared to its fitness tracker range. So much so that Fitbit says it may be used in the future to help determine atrial fibrillation.

Fitbit recently came out with its new Female Health Tracking feature. This allows women to see how their periods impact different aspects of their lives, everything from sleep to activity levels. This is something we have not seen before so the company should be applauded for treading on new ground.

The Apple Watch also has a few tricks up its sleeve.

The most exciting of all is the FDA-cleared ECG sensor. To take a reading rest your finger against the digital crown. This creates a closed circuit with the sensor on the back. You’ll get a full report in the new ECG app that will let you know if your heart rhythm is normal or there are issues. The functionality will be enabled later this year, first in the US then in other countries.

Finally, Series 4 also comes with built-in GPS. This allows for true phone-free exercising, something many runners will appreciate.

Apple has clearly closed the gap on Fitbit when it comes to activity tracking, although its still playing catch-up. While both devices take care of the basics, the Apple Watch has some obvious omissions such as the lack of a native app for sleep tracking. The short battery life is also a hindrance for something that is supposed to monitor your activity 24/7.

But the built-in GPS, in particular, works in its favor. Apple is also better when it comes to tracking for health issues. It now monitors for a number of conditions and has the FDA’s approval to do so.

When it comes to smartwatch features Apple is light years ahead. So much so that it actually represents a natural extension of your iPhone. There is a plethora of native and third-party apps and the upgrade to watchOS5 comes with lots of goodies.

Although it can’t really compete with the Apple Watch on this measure, Versa comes with a few non-fitness features as well. This includes 2.5 GB of local storage for music, access to Pandora, notifications for call, NFC chip for contactless payments, text and calendar alerts, and much more. There is also an app store with a handful of native apps and an open its SDK for third-party developers.

Fitbit’s design team has done well. With its polished look Versa is huge improvement on Ionic – a timepiece equally suited for both men and women. But while it might seem similar to the Apple Watch, its actually quite different. Fitbit’s device puts fitness first, smartwatch features second. The Apple Watch is, by far, the best all-rounder.

Fitbit has had the fitness side of things nailed down for a while now. And Versa takes all this great functionality and makes it even better. What doesn’t work in its favour is the lack of built-in GPS. But unless you are an avid runner, this probably won’t make too much of a difference.

The lack of built-in GPS also helps establish a significant price gap that works in Versa’s favour. Plus Fitbit’s timepiece offers a few other advantages over Apple’s device such as much longer battery life and native sleep tracking.

Apple, on the other hand, is now in the lead when it comes to tracking for health issues. Series 4 sends low/high heart rate alerts, looks for irregular heart rhythm, it comes with ECG functionality and monitors for trips and falls. And it has the FDA’s stamp of approval to do most of these things.

Apple’s device also offers so many other things in addition to being a fitness tracker, its health and fitness features do not need to be the main reason for purchase. But the company’s cellular-enabled device costs about twice as much as Versa and its battery life remains a major stumbling block.

As a budget-friendly fitness watch, Versa is a great option. If, however, you are equally (or more) interested in non-fitness features and price is no issue, there is a long list of reasons why Apple’s device is currently the best selling smartwatch in the world.

2 thoughts on “Apple Watch Series 4 vs Fitbit Versa: the battle of the smartwatches”