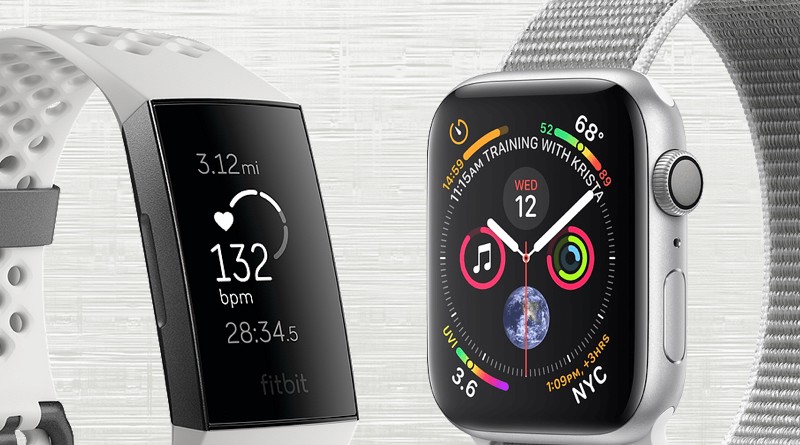 Apple Watch Series 4 and Fitbit Charge 3 are quite different animals. One is a fully fledged smartwatch, the other a fitness band. And while smartwatches may be all the rage at the moment, fitness bands are not going away anytime soon.

With each new iteration, the Apple Watch is edging closer to becoming your must-have health guardian. Series 4 comes with a bigger display, a slate of new health and fitness features, performance upgrades and more.

Fitbit Charge 3, on the other hand, is an updated version of the company’s best selling fitness tracker. It takes across everything we’ve come to love about the previous device and makes it even better.

If you are in the market for a fitness wearable you may be wondering which of the two you should opt for. Read on for a comparison of their features.

Fitbit Charge 3 looks like a more modern and stylish version of its predecessor. But you can definitely recognise that its a Fitbit wearable. The company hasn’t strayed too much from its signature look over the years.

The fitness band is built of more lightweight material than Charge 2 including an aerospace grade aluminum case and Corning Gorilla Glass 3 display. Measuring 18.3mm in width, 11.8 mm in depth and weighting about 30 grams, you’ll hardly feel it on your wrist.

The single physical button on the right hand side has been swapped with an inductive button. The display has grown by about 40% from the previous version, so is much better suited for quickly glancing down at your stats. Its also now fully responsive to touch.

Swiping up on the screen will scroll through your daily fitness stats, swiping down will show notifications and swiping right other functions. If you’ve ever used a Fitbit device, you’ll feel right at home. No big learning curve here.

Charge 3 comes with two bands in the box that you can swap depending on your wrist size. Because bands are interchangeable, you can shop around and find one to fit your personal style. 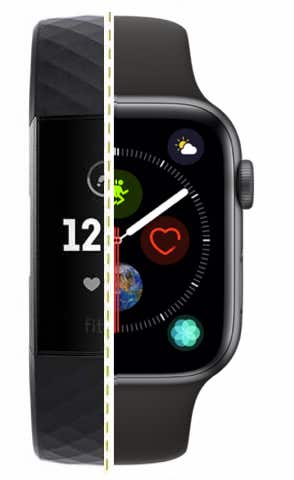 The Apple Watch looks very different to Fitbit’s wearable. That’s because its not a fitness band – its a fully fledged smartwatch.

The gizmo sports an edge-to-edge screen with new display technology called LTPO that improves power efficiency. The actual dimensions of the device are still the same but the screen real estate is larger by 30% on both the 40mm and 44mm version. The new watch is also slightly thinner than its predecessor.

The back is made of black ceramic and sapphire crystal on all versions of the device. Apple says radio waves can now pass through both the front and back resulting in better cellular reception.

Apart from the overall dimensions, a major difference between Fitbit’s and Apple’s devices is the screen. While they are both off by default, you’ll get much more screen real estate on the Apple Watch.

All things considered, we would put Apple Watch 4 ahead of Charge 3 in terms of aesthetics and design. But Fitbit’s tracker is good looking and a decent improvement on its predecessor.

Under the hood there are a few important differences to be aware of. Both trackers share an optical heart rate monitor, 3-axis accelerometer, gyroscope, altimeter, vibration motor and ambient light sensor. Charge 3 also comes with something Fitbit calls a relative SpO2 sensor. This measures blood oxygen levels and Fitbit plans to use it in the future to identify sleep apnea.

Apple’s Series 4, on the other hand, comes with built-in GPS. This is an important feature for those who run or cycle on a regular basis as it allows for phone-free exercising. Charge 3 only has connected-GPS, so needs your phone to be in close vicinity if you want to benefit from GPS readings.

The other important difference is the ECG sensor. Due to be enabled later this year (in the US first than other countries), it is capable of letting you know if your heart rhythm is normal or there are issues. The Cupertino outfit has also upgraded its accelerometer and gyroscope and these can now sample motion data 8 times faster. This allows for nifty features such as fall detection.

Finally there is also the cellular connectivity of the Apple Watch. Series 4 features a small electronic SIM card. This comes with on-going monthly fees, though.

Apple’s technical specifications suggest the watch has enough juice to run between one and two days on a single charge. GPS in particular will drain the battery. Which means sadly most nights you’ll need to charge the watch. This continues to be a sticking point.

Fitbit is right on top of things on this count. Charge 3 comes with around 7 days of battery juice on a single charge. This is fairly decent and bodes well against the competition and its predecessor.

When it comes to water-resistance, though, both wearables will do the trick. Charge 3 and Series 4 come with a fantastic 5 ATM water-resistance rating allowing you to dunk them down to depths of 50 metres. They’ll track your adventures in the pool, too, and spit out relevant stats.

When it comes to fitness tracking, you’ll find the essentials on both devices. This includes 24/7 heart rate monitoring (including current, resting and heart rate zone information), tracking of steps, distance travelled, floors climbed, active minutes and calories burned. There is also automatic activity recognition, move reminders and some more advanced performance metrics such as VO2 Max.

The Apple Watch offers two fitness apps: Activity, which monitors your daily routine; and Workout, which tracks running, cycling and walking sessions. All of this info is regularly synced to the Health app, so you can keep your fitness and other health related information in one central location.

The most obvious advantage of Fitbit over Apple is sleep tracking. Fitbit Charge 3 has it, Apple Watch Series 4 doesn’t. Unless you opt for a third party app, that is. But even if you do, the fact that you’ll to charge the device so often makes sleep tracking pretty difficult. And this is the other advantage of Fibit’s device. The fact that it runs for a full week between charges makes fitness tracking much easier.

And lets not forget the above mentioned blood oxygen sensor. You’ll soon be able to use it to keep tabs on your oxygen saturation levels at night, allowing you to better understand your sleep quality.

Finally, there’s the company’s Female Health Tracking feature. This allows women to see how their periods impact different aspects of their lives, everything from sleep to activity levels. This is something we have not seen before so Fitbit should be applauded for treading on new ground.

The Apple Watch also has a few tricks up its sleeve. Most of these are to do with health rather than fitness tracking.

The most exciting of all is the FDA-cleared ECG sensor. To take a reading rest your finger against the digital crown. This creates a closed circuit with the sensor on the back. You’ll get a full report in the new ECG app that will let you know if your heart rhythm is normal or there are issues.

Finally, Series 4 also comes with built-in GPS. This allows for true phone-free exercising, something many runners and cyclists will appreciate.

Although Charge 3 is a fitness band, it does come with a few smart features. Some even consider it a smartwatch disguised as a fitness tracker – although we think that’s stretching it a bit.

The wearable has the ability to reply to messages (for Android users) and the option to accept or reject calls. It also comes in a slightly more expensive Special Edition version, that has an NFC chip for contactless payments. You can install apps, too, though list is not very long at the moment.

Its superfluous to say that when it comes to smartwatch features Series 4 is light years ahead. So much so that it actually represents a natural extension of your iPhone. There is on-board storage for music, a plethora of native and third-party apps and the upgrade to watchOS5 comes with lots of goodies.

So which of the two should you opt for? Well, it really depends on what you are looking for. Apple Watch Series 4 and Fitbit Charge 3 are quite different animals. One is a fully fledged smartwatch, the other a fitness band.

Charge 3 is similar to other Fitbits – there is no ground-breaking new technology on board. Instead of slapping on a host of new features, Fitbit is focusing on what it does well, and improving on it. What doesn’t work in its favour is the lack of built-in GPS. But unless you are an avid runner or cyclists, this probably won’t make too much of a difference.

Apple, on the other hand, is now in the lead when it comes to tracking for health issues. Series 4 sends low/high heart rate alerts, looks for irregular heart rhythm, it comes with ECG functionality and monitors for trips and falls. And it has the FDA’s stamp of approval to do most of these things.

Nevertheless, if you’re purely in the market for a fitness wearable, Charge 3 is the obvious choice. It takes care of all the basics, including sleep tracking, and is about twice as cheaper than Series 4. Its long battery life also works to its advantage.

Apple’s device, on the other hand, offers many, many other things in addition to being a fitness tracker. The watch is, by far, the best all-rounder. The built-in GPS and on-board music storage may also make a difference to some.

So it really comes down to your preference. Do you want a fitness band that provides most of what you’ll need for activity tracking, or would you be happier with something larger and more expensive but far more feature rich.

2 thoughts on “Fitbit Charge 3 vs Apple Watch Series 4: which is right for me?”