Smartwatch sales are going from strength to strength. According to Strategy Analytics, some 10 million devices were shipped in the three months to September. This represents a whopping 67% year-on-year increase.

No prizes for correct guesses on who tops the list. Once again, Apple dominated having shipped 4.5 million smartwatches, one million more than in the same period in 2017. This is particularly impressive considering the Series 4 was only launched in September, so its contribution to this number was minimal.

The success of its smartwatch contributed to strong revenue figures. Apple’s wearables category set a new revenue record in the September quarter, having grown by 50% from the year-ago period.

Fitbit in second place went from zero last year, to shipping 1.5 million devices in the past three months. This is because its first smartwatch, the Ionic, was only launched in the fall last year. The company announced a few days ago that, for the first time in two years, it has returned to profit. Fitbit owes this recovery to smartwatches, and the Versa in particular.

Other competitors also saw growth, but it was not as impressive. Samsung held third place with 1.1 million devices shipped, largely due to its popular Gear line and the launch of the Galaxy Watch.

Garmin saw a more modest increase. Its number of smartwatches shipped increased from 600 million in Q3 2017 to 800 million in Q3 2018. A testament to its long-term success since it was founded back in 1989, the company shipped its 200 millionth product within the quarter. 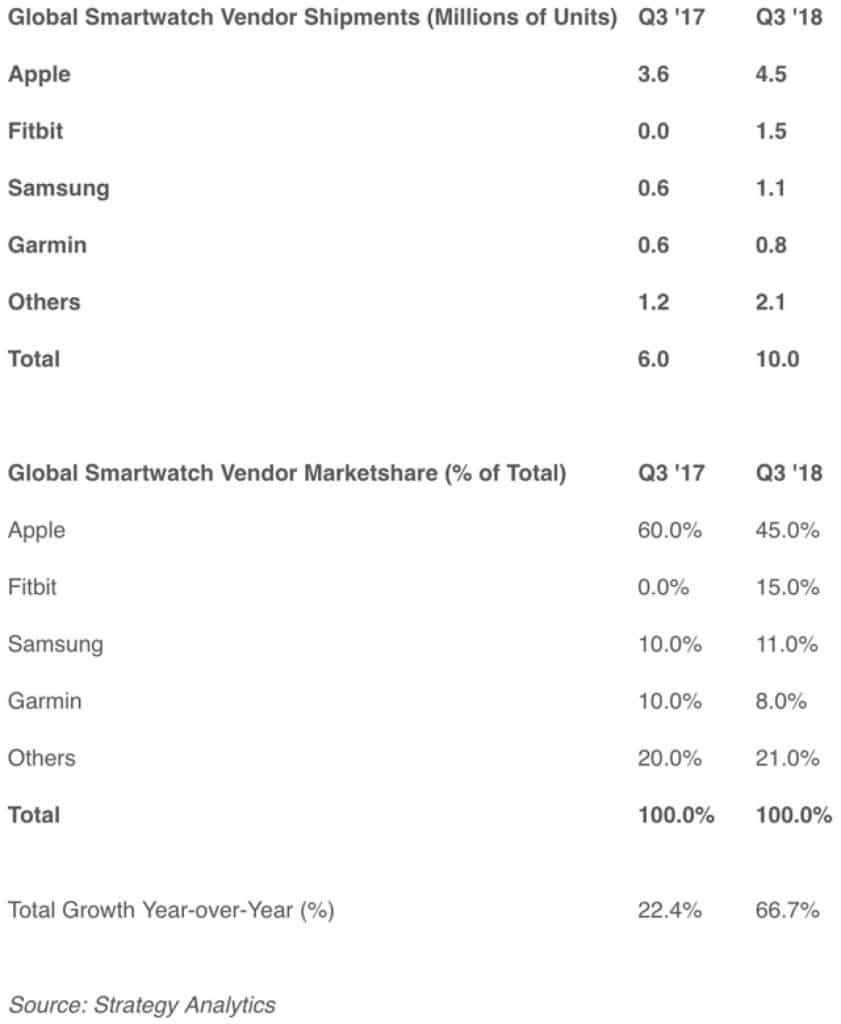 No doubt, these sales figures are set the balloon in the final quarter. Prices on smartwatches and other goods are set to fall as shoppers gear up for the festive season. Black Friday falls on November 23rd this year, the day after Thanksgiving. This marks the beginning of the Christmas shopping season.