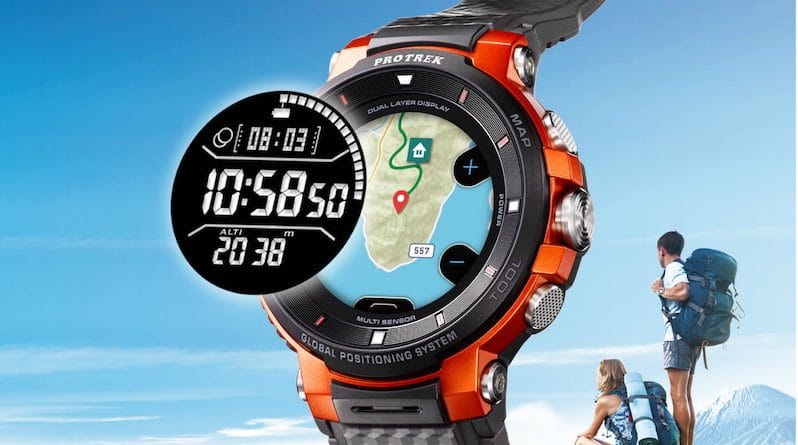 At IFA 2018 in September, Casio announced a new edition to its PRO TREK series – the WSD-F30. It boasts design enhancements along with a number of new features and an extended battery mode. The watch is finally available for purchase on Amazon and Casio’s website.

Casio’s PRO TREK Smart series consists of rugged watches designed for outdoor enthusiasts. The first watch in the series was the WSD-F10. It was released back in 2016 and this was followed up in 2017 with the WSD-F20.

The company is back now with the latest iteration in the Series. The most important new feature is offline maps in something Casio calls Extend Mode. In this mode GPS logging can be used for up to three days (8 hours per day) on a single charge. The watch conserves energy by switching to a monochrome display but maps can be displayed in full colour at the push of a button.

More energy can be conserved by switching the operating system to a stand-by mode on a schedule set by the user. Outside of Extend Mode and when using all smartwatch functions, the battery on the Pro Trek WSD-F30 will last only a day and a half.

Finally, Multi Timepiece Mode is something you can switch on to conserve battery life even further. This turns off smartphone notifications, GPS and the color display, relying purely on the monochrome screen. Casio says this will extend battery life to around a month, matching its predecessor.

There have also been some design tweaks. The WSD-F30 comes with a enhanced dual-layer OLED display which shows everything in much greater detail and allows for switching between the monochrome and colour display. In addition to the time, the watch face now shows atmospheric pressure/altitude and compass bearing.

The timepiece is still fairly chunky but Casio has shaved 0.4mm from the case. The device is also 3.9mm more narrow than its predecessor. Mind you, seeing that this is a rugged, hiking watch, its never going to be slim and subtle.

Casio has announced several app partnerships suited to those with active, outdoor lifestyles. This includes the Bikemap app which allows users to download maps and routes to access straight from your wrist offline, ViewRanger for mapping, Hole19, Glassy, Fishbrain, MySwimPro and more.

WSD-F30 is available now in a choice between black, blue and orange colors. On Casio’s website it is selling for $550. Click here to check price on Amazon.