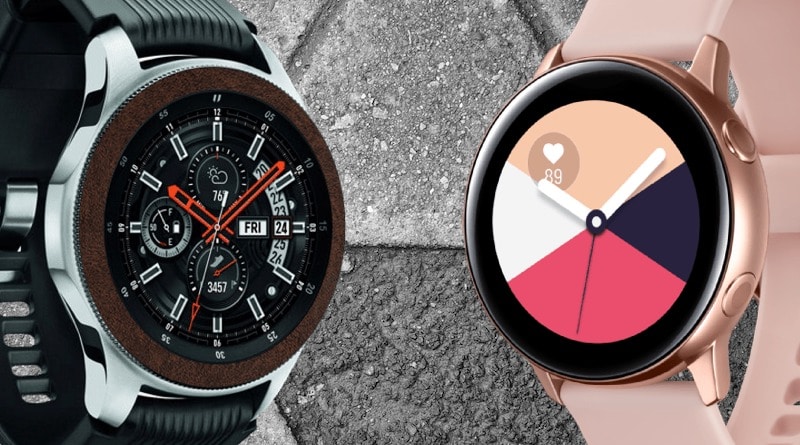 Following months of leaks and rumors, Samsung has added a few new wearables to its Galaxy lineup. One of these is the successor to the Gear Sport, the Galaxy Watch Active.

In name, the device is very similar to the Galaxy Watch which was released last summer. But there are importances nuances you should be aware of. Let’s put the two side by side.

Samsung Galaxy Watch comes in a circular stainless steel case and a more stylish look than its predecessor. You can pick it up in two sizes, a 42mm variant and a 46mm variant.

Both iterations sport a round 360×360 pixel, touchscreen, Super AMOLED display, although the 46mm version comes with more screen real-estate – 1.3 inches versus 1.2 inches. Whichever size you choose, there’s a rotating bezel to navigate the screen.

Users can choose between a Silver, Midnight Black and Rose Gold model. The bands are interchangeable and there a number to choose from. A 22mm band is required for the larger iteration and a 20mm band for the 42mm variant.

Coming in at only 25 grams it’s also much lighter (49/63 grams 42/46mm). A company spokesperson even compared its weight to a single strawberry!

There are two recessed side buttons on the right which look great. You will need to use them quite often along with the touchscreen because the trademark bezel is gone.

Battery life is fairly decent, especially considering that these figures are with the always-on screen option switched on. Samsung says Galaxy Watch comes with around 7 days of battery juice for the 46mm version (472 mAh) and around 3 days for the 42mm one (270 mAh). In reality you’ll find that battery life is slightly lower. With its 230mAh lithium ion battery, Active will keep going for around 2 days.

When it comes to water-resistance both of these wearables will do the trick. They sport a a fantastic 5 ATM water-resistance rating and will monitor your swim sessions with appropriate statistics.

Although Galaxy Watch is a smartwatch, just like Active, it provides most things an average person needs for fitness tracking. This includes steps, distance, calories, floors climbed, active minutes and more. There are also move reminders and some advanced performance metrics such as VO2 Max.

Then there is built-in GPS. This is particularly important for those who appreciate phone-free exercising. Both watches can track 39 different exercises, with six of them auto-tracked. The built-in storage for music allows for a complete phone-free experience.

The other fitness benefit is that the watches use the built-in heart rate monitor to keep an eye on stress levels. They will give you an alert to rest there is a spike in your heart rate which cannot be attributed to exercise. Just like the Apple Watch’s Breathe app, you can then use Samsung’s breathing exercises to get your heart rate down.

Active goes a step further with its ability to take blood pressure measurements. The feature is not something that is built into the watch or its smartphone app, though. Rather it will come from an optional research app users can install that has been developed jointly with the University of California, San Francisco. You can read more about it on this link.

In terms of smarts, both of these devices are fully fledged smartwatches and shine on this count. They come with storage for music, NFC for payments, and Samsung’s AI assistant Bixby baked in. Galaxy Watch also has an LTE variant for calls, messages and data away from your smartphone.

Most of the differences between Galaxy Watch and Active are in design. Both timepieces are slick and premium looking, but Active is smaller, lighter and more comfortable which is what you want when exercising. It’s also cheaper.

Having said that, Galaxy Watch provides most things an average person needs for fitness tracking as well. It comes with a larger battery and the trademark rotatable bezel.

Both devices include similar specs under the hood, and pack GPS, NFC for payments on the go, Wi-Fi and Bluetooth. Galaxy watch comes in an additional LTE variant for cellular connectivity away from your smartphone.

If you prefer something with a slim, lightweight design, Active is the clear winner. If you’re a fan of the larger look, want the extra battery life and don’t mind spending a few extra bucks, Galaxy Watch remains a solid option.