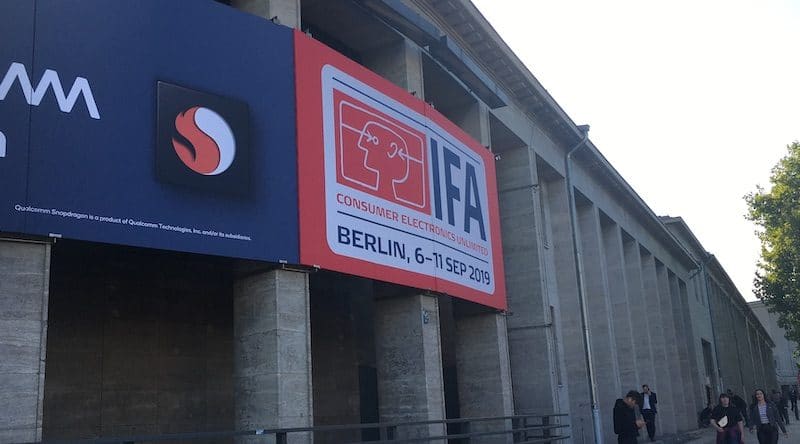 IFA in Berlin has closed its doors yesterday for the 58th year. Over 250,000 people visited Europe’s biggest technology show in 2019.

Of most interest to us were wearables, and they did not disappoint. As usual, Apple wasn’t there but most other big wearables manufacturers were. And they used the opportunity to showcase a range of new devices.

Here are the top smartwatches that made their debut at IFA.

Fitbit is a regular at the show and this year it used it as an opportunity to showcase Versa 2. It comes with some upgrades over its predecessor such as a better display, longer battery life, more powerful processor and Alexa support.

We get the same square-ish display although it is now AMOLED instead of LCD. Coupled with this are slim bezels and an aerospace grade aluminium casing. On the left is only one physical button.

September 15th is the official release date but you can pre-order now for $200 on Fitbit. There’s also a special edition which comes in at $230. The main difference here is that you get an extra (woven) band and a 90-day Fitbit Premium trial. You can also purchase the tracker on Amazon.

In a bit of a surprise, Samsung unveiled Galaxy Watch Active 2 in the run-up to the event. We say surprise because its predecessor was launched only six months ago.

This version comes in multiple sizes and some design tweaks. One of these is the black border that surrounds the screen which functions as a touch sensitive strip.

The watch takes across all the fitness tracking smarts of its predecessor but improves on the heart rate sensor. ECG reading functionality will also be enabled at some point in the future.

Pre-order prices start at $279 in the United States on Samsung’s website. The watches are scheduled to ship out on September 27th. You can choose between a stainless steel Bluetooth version, or a lightweight aluminum LTE model.

A couple of weeks ahead of IFA, Garmin revealed the next iteration in its Fenix series. The Fenix 6 looks better and its more feature-packed.

The exciting news here is the addition of the Solar variant, a first for Garmin. This features a transparent solar charging lens that sits on top of the watch face. It adds more juice in all battery modes by converting the sun’s rays into energy. In addition to this, Garmin has introduced customisable power-management modes.

The new Fenix range starts at $599 for the base 6 and 6S variants. And it only goes up from here. All variants are available on Garmin’s website right now and Amazon (check price).

This is an update to the Vivoactive 3, Garmin’s main competitor in the all-purpose smartwatch space. The original came only in one size but Garmin is now introducing two, a 45mm stainless steel model and a 40mm model for small wrists (4S).

Other changes over the original include pulse oxygen readings which Garmin has been adding to its latest crop of watches, along with estimated respiration. There’s also the new Body Battery function, abnormal heart rate alerts, female health tracking, yoga and pilates workouts, as well as some 40+ workout animations.

Both models are priced at $349.99 and available in a multitude of colour options and metal finishes on Garmin’s website.

In a sense, this one can also be considered a Vivoactive 4 iteration, albeit a high-end one.

The feature-set is identical, the only difference is in design. Venue slaps on a AMOLED display inside the 43mm case, similar to what you’d find on an Apple watch or Fitbit Versa 2.

The sacrifice is battery life which is only five days and 6 hour in GPS and music mode. Choose the always-on screen option and this falls to between 2 and 3 days.

As you’d expect, Venu is pricier and starts at $400 on Garmin’s website.

The difference between these watches and the Vivoactive 4 is that they are built from materials influenced by the superheroes, some new watch faces, goal animations and challenges.

The watches are set to land in October for $400.

The Vivomove 3 series comes in a number of different variants. This includes the Vívomove 3/3S (to denote two case sizes – 44mm and 39mm), and more premium Vívomove Style (42mm) and Vívomove Luxe (42mm).

All of these slap on Pulse Ox, Body Battery, Garmin Pay (select models only) and Connected GPS, features which are not available on the predecessor. Battery life is up to 5 days in smartwatch mode and a further 7 days with limited functionality.

The difference between the variants comes down to design. The Vivomove 3 and 3S have a single monochrome display while the other two come with duel AMOLED color displays. Vivomove Style and Luxe also come with more premium build and straps.

Depending on the model, the hybrids cost anywhere between $250 and $550. You can pre-order now on Garmin’s website.

The ASUS VivoWatch SP goes further than anything else on the market with its ability to monitor heart rate, pulse oxygen and even blood pressure from the wrist. This last one is a first.

The gizmo will not keep tabs on your blood pressure around the clock, only on demand. To take a reading, you will need to rest your index finger and thumb against the sensors on opposite sides of the watch for about 15 to 20 seconds. The all-important question is just how accurate will it be?

A representative of the company told us the watch should land towards the end of this year. No info yet on how much it will cost.

Stratos 3 takes across all the features of the popular Stratos 2 and slaps on a better 1.34″ transflective screen, multiple power modes, an upgraded heart-rate sensor, 8 Firstbeat features, support for 19 sports modes and more.

There are two variants to choose from. The $200 Stratos 3 is the basic version, the $230 Stratos 3+ comes with some extras. This includes water-repellent sapphire mirrors (instead of Sapphire Glass) encased in a titanium alloy bezel (instead of stainless steel). It also upgrades the strap to smooth and durable fluorine rubber (instead of silicone).

Stratos 3 is set to land by the end of this year. The more premium Stratos 3+ should become available early next year.

Amazfit GTS can probably be considered as the successor to the Amazfit BIP. This is an Apple-watch lookalike that comes with 14 day battery life and a gorgeous 1.65″ rectangular AMOLED display. The PPI of its screen is 341, suprassing the Cupertino outfit’s PPI of 326.

Amazfit GTS should be available for purchase internationally in early October for around $130. We are currently testing out the watch so keep an eye out for our review in the coming weeks.

We suspected it might happen when we spotted the FCC filing and it became official at IFA in Berlin. Puma has unveiled its first smartwatch in partnership with Fossil Group.

The Wear OS smartwatch seems decent enough on paper. Its equipped with the latest Qualcomm Snapdragon Wear 3100 platform, 512MB of RAM, 4GB of storage and has some features that might appeal to runners. This includes built-in GPS, continuous heart rate in workout mode, a swim-proof design and apps to take your training up a notch.

Unfortunately, battery life is only around 24 hours which means you’ll be charging it every night. The main reason for this is its always-on 1.19″ AMOLED display.

Those interested will be available to purchase it in three distinct colours from November for a price of $275.

Armani’s new smartwatch looks very sporty, something you would perhaps not expect from a luxury design brand. The Wear OS device definitely looks better than its predecessor.

The watch has a minimalist but cheerful look and comes with three physical buttons on the right. As you’d expect, the 1.28-inch AMOLED (328 pixels-per-inch) screen is very crisp and clear.

The Armani Smartwatch 3 will sell for $395 when it launches in October. This might seem a bit steep but it is to be expected considering the specs and classy brand it’s coming from.

Just like its predecessor, this is a very durable, bulky device. It comes with rugged pushers, steel rivets and an aluminium core. Nevertheless, the watch manages to look quite smart and stylish.

Fossil Group has been slapping the same generation 5 smarts to all its recent wearables. Diesel On Axiel is no exception.

Other features worth mentioning include NFC for Google Pay, built-in GPS, heart rate tracking and a swim-proof design. Diesel has decide to pre-install a number of apps on the watch such as Cardiogram, Spotify and Noonlight.

The $350 Diesel On Axial is due to land in October. Customers will have a choice between gunmetal, silver and bronze-tone stainless steel cases and a plethora of strap options.

Fashioned for men, Access Lexington 2’s main attraction is the premium design. The watch has with a 1.28 inch 328 ppi resolution AMOLED screen that fits in a 44mm stainless steel case and bezel.

Like other Fossil Group wearables, there’s the latest Snapdragon 3100 chip and a built in speaker. Users now have the ability to take calls from the wrist, talk to Google Assistant, play music, hear sound alerts and more. Another upgrade are multiple power modes, 8GB of storage and 1GB of RAM. This should keep the thing running very smoothly.

Access Lextington 2 is available now on Fossil’s website and starts at $350. It can be picked up in gold-tone, rose gold-tone, silver-tone and two-tone stainless steel designs

Access Bradshaw 2 is another Michael Kors watch for fashionistas. It comes with exactly the same features as Access Lexington 2 but this one is meant for women. The two watches actually look very much alike apart from subtle differences in design.

Access Bradshaw 2 will launch on September 25th. It will also start at $350 and up. The smartwatch will be available in gunmetal, rose gold-tone, gold-tone or silver-tone stainless steel.

All three new Michael Kors watches come with a heart rate monitor, accelerometer, altimeter, built-in GPS, a swim-proof design and NFC for contactless payments. But Access MKGO is the best option if you’re into the active lifestyle.

It’s very thin measuring only 7mm and comes with a 1.19″ display. It’s also very lightweight, has a battery life of around 36 hours and comes with Google Fit pre-installed.

The device is the cheapest of the new Michael Kors watches coming in at $295. The watch comes in 43mm aluminium and nylon casing and a choice between pink, black, white and red silicone straps.