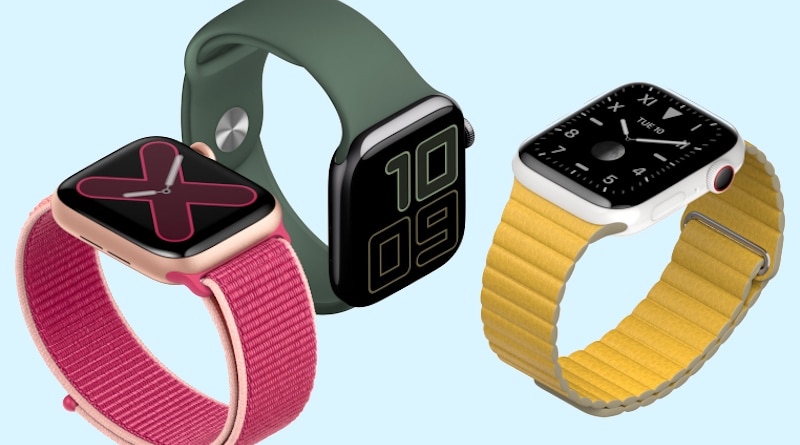 Apple has recently launched the Series 5 watch. There were very few leaks ahead of the 10th September event and some were even wondering whether we would see a new iteration.

But now its here and it comes with some handy upgrades. The Cupertino outfit has, at the same time, decided to discontinue the Series 4 watch while slashing the price of Series 3. You can still pick up the Series 4 while stocks last but its days are numbered.

This means for the next year or until the company releases the Series 6 device, those interested an Apple Watch will mostly be looking to decide between the Series 3 and 5.

Is the latest model worth the extra money? Here’s our guide to help you choose the right watch for you.

Although they look similar, there are quite a few differences between Series 3 and 5 when it comes to design.

For starters, the display sizes are different. The Series 5 (and 4) sport an edge-to-edge screen with technology called LTPO that improves power efficiency. The screen real estate is larger by 30% on both the 40mm and 44mm version.

This means the device is able to show more complications and apps can show more information and detail. At 10.7mm, the Series 5 (and 4) is also slightly thinner than Series 3.

Another important upgrade is that with Series 5 you finally have an always-on display. You don’t get this with predecessor versions. You finally have a watch that never goes dark. Apple has managed to achieve this whilst keeping the battery life the same at 18 hours.

Other hardware has also seen improvements.

On Series 5 (and 4), the digital crown has been completely reengineered. It now includes haptic feedback, giving you a more responsive mechanical feel through the sensation of incremental clicks. The microphone has also seen a boost.

Each subsequent version of the watch comes with better internals. Powering everything on the latest iteration is a fifth generation SIP called S5. This contains a dual core 64-bit processor customized by Apple to bring 2 times faster performance than on Series 3. Memory has also been doubled with Series 5 to 32mb.

To summarize, Apple’s latest watch clearly improves on Series 3 in a number of ways. The most important is the larger, always-on display. But improvements under the hood mean the watch will also perform better.

Pretty much the only design difference between Series 5 and 4 is the always-on screen on the former and a slightly better processor and memory.

Here’s a table showing how the devices compare in terms of general specs and design.

Some watches might be better at tracking fitness, but the Apple Watch is the best all-rounder out there. If you’re interested both in activity monitoring and lots of smart functionality, it is your best choice.

In terms of activity tracking, pretty much the only difference between Series 4 and 5 is the addition of a compass on the newer device. But there are quite a few differences between these two and Series 3.

Most famously, there is the ECG monitor which was introduced starting with Series 4. Apple has integrated a crystal electrode on the back of the device and it connects to the digital crown electrode. You’ll get a full report in the new ECG app that will let you know if your heart rhythm is normal or there are issues. The improved heart rate sensor also dishes out low heart rate alerts and will let you know if it suspects atrial fibrillation.

Then there is Apple’s next generation accelerometer and gyroscope which can sample motion data 8 times faster. The improved hardware allows the Series 5 (and 4) device to do a better job at tracking steps, calories and more. It also allows the gizmo to do some more interesting things such as fall detection.

Other health and fitness tracking functionality is pretty much the same across the different versions.

That is the case for smart functionality, too. All of these models come with an LTE option, they come with Apple Pay, Gym Kit and more. They will all be compatible with WatchOS 6 when it comes out on September 19th, and come with a great ecosystem of apps.

Here’s a run-down on how the watches compare when it comes to activity tracking and smart functionality.

Most of the differences between the Series 5 and 3 Apple Watch stem from design. It will be down to you to decide whether a larger, always-on display and more powerful internals are worth the extra money.

And the price difference is quite significant. The Series 5 starts at $399, the Series 3 at $199. You’ll struggle to find a smartwatch as feature-packed as the Series 3 for that price. It’s great for those on a tight budget.

Having said that, the activity tracking internals have been improved on Series 5 (and 4) and include a better heart rate sensor and accelerometer, along with the ability to take an ECG and some other upgrades. These changes may not make a difference to you as the Series 3 does a perfectly decent job at tracking fitness. However, for those that can afford it it’s usually better to opt for the newer device.

There’s also another option. If you can find a hefty discount you could always go for the Series 4 watch. Apple has discontinued it but while stocks last you will be able to buy it. It lacks the always-on display and compass of the Series 5 but comes with pretty much everything else.