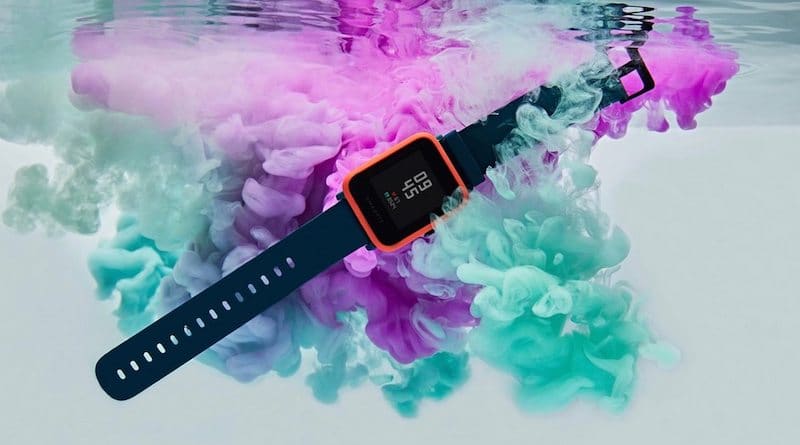 Many thought last year’s Amazfit GTS was the updated version of Amazfit Bip. However the unveiling of Bip S at CES 2020, shows Huami clearly has an interest in keeping this range separate.

We reviewed Amazfit BIP a number of years back and found it to be excellent value for money. Its 2020 successor comes with some iterative upgrades such as a better heart rate sensor, more sports modes, improved GPS/GLONASS, 5 ATM water-proofing and a higher-spec display.

There’s no denying there are lots of similarities between Amazfit GTS and Bip S. If you’re in two minds on which of these is right for you, this article explains exactly how they stack-up.

The two smartwatches are very much alike. Both feature a squarish, extremely lightweight design with a single physical button on the right. This is used for navigating in addition to the touch display.

Amazfit GTS is, however, slightly larger and thinner. It is also more premium looking with its Polycarbonate and Zirconia ceramics body.

Another thing in Amazfit GTS’s favor is its its Super Retina-grade display. This is definitely the highlight of this device. Probably one of the best quality displays we’ve seen so far on a smartwatch.

The screen is larger than on Bip S, 1.65″ versus 1.28″ and it has double the pixel-resolution. Corning Gorilla glass generation 3 protection and 2.5D curved glass can be found on both. Bip S has the Transflective Color TFT display which can be found on many Garmin devices.

Common to GTS and BIP S is the fact there is only one size option. But this is not a problem as Huami has found a sweet-spot, where the device can be used by both men and women. The watches are not bulky and they are not too small, either.

Bip S has improved the water-resistance with the latest version. Whereas the earlier device is only splash-proof (IP68), you can actually take Bip S swimming with you thanks to its 5 ATM rating. GTS is no different on this count.

Under the hood the two watches have pretty much the same specs. They share Huami’s latest Biotracker PPG for monitoring heart rate, the 3-axis geomagnetic sensor and GPS/GLONASS. The accelerometer on GTS is 6-axis, which is better than the Bip S’s 3-axis. GTS also has NFC support for UnionPay payments.

The incredible battery life is the thing we’ve come to associate with Huami watches. The good news is both of these devices will have you covered. GTS can keep going for more than a month with regular use (depending on settings) and 25 hours with GPS switched on. Bip S is even more impressive with its 40 day of typical use battery life, 3 months standby time and 22 hours in GPS mode.

Here’s an overview of design and hardware differences between Amazfit GTS and Bip S.

In terms of actual functionality, there is very little to separate the two devices. The big price difference between them is due to the more premium design of the GTS.

Which means both will have you covered when it comes to activity tracking. All the basics are there apart from an altimeter for counting floors climbed. For sleep, you’ll get info on deep sleep, light sleep and awake time. There’s also an overall score which lets you know at a glance how well you’ve slept.

With a total of 12, GTS has 2 extra sports modes over Bip S. Its 6-axis accelerometer also means the watch should be slightly better at tracking stats and distance. However, these differences are miniscule.

In addition to sharing the upgraded heart rate sensor, the important thing is that both watches have GPS/GLONASS positioning. This should in theory ensure the data is accurate when running or cycling.

You also get the typical smart functionality such as notifications, music control, weather and more. The watches run on Huami’s proprietary operating system which is simple to use and works well.

Amazfit GTS, however, goes a little further with widgets or complications. Just like on the Apple Watch you can use them to customize the watch face. It also comes with NFC for on-the-go payments. This is something you don’t get on the Bip.

We are glad to see Amazfit Bip has a successor. The device has been a very popular seller over the past couple of years. The new Bip S comes with some healthy upgrades which should make the watch even better when it launches in February.

Most of the differences between Bip S and GTS come down to design. GTS is clearly the more premium of the two as it’s built of better quality materials and its Super Retina-grade display is a stunner.

Apart from that the only other differences worth mentioning are the slightly better accelerometer on GTS and built-in NFC for contactless payments. The awesome battery life can be found on both.

What works in Bip S’s favor is that it sells for about half the price of GTS. Plus the fact that it’s the successor to a watch that has become a favorite of many due to its solid performance.