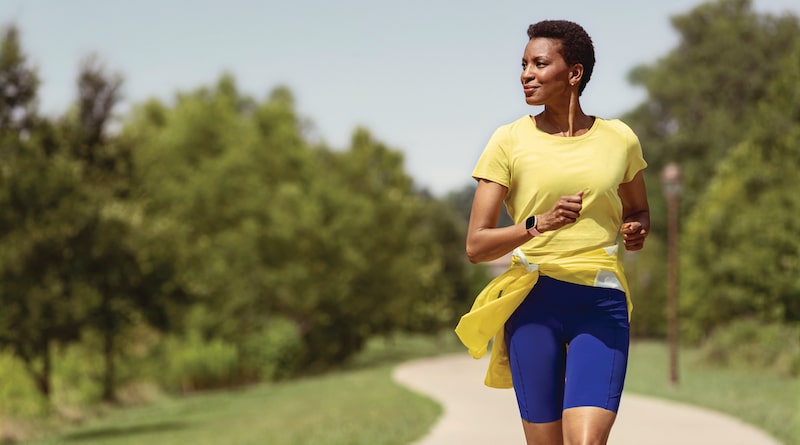 Fitbit has been relatively quiet so far in 2020. This is probably due to the pending acquisition by Google. We say pending because it is still yet to secure regulatory approval.

But what has been a slow few months has changed yesterday when the company announced a trio of new devices. These include the Inspire 2, a new health watch called Sense and Versa 3.

The last on this list is an updated version of Fitbit’s best selling smartwatch. It comes only a year after its predecessor.

Do the upgrades make it a worthy purchase? Should you sell your Versa 2 and get the newest gadget? Read on to find out.

All generations of Versa have a similar look. That’s not necessarily a bad thing as the design is sleek and functional. There’s no need to change something that works. But there have been slight tweaks which make each subsequent generation slightly different.

One of these is the display size. The original Versa and Versa Lite come with a 1.34 inch display. This was increased to 1.39 inches for the second generation, and now to 1.58 inches with Versa 3. A bigger display is a good thing as long as it doesn’t make your watch too bulky. It makes it easier to read everything, particularly in the middle of a run.

The good news is that Versa 3 is making better use of space. The dimensions of the device have only increased slightly as compared to the previous generation, from 39.8mm x 39.8mm to 40.48mm x 40.48mm. So this, in combination of some shrinkage to bezel size has allowed the company to squeeze in a larger screen. This also means a slight bump in resolution to 336 x 336 pixels.

As can be seen from the images, Versa 3 and Versa 2 do look very similar. Speaking of size, another difference between them is that Versa 3 is a fraction thicker. It comes in at 12.35mm, versus 12mm for Versa 2 and 11.2mm for Versa Lite. You are unlikely to notice this as the changes are slight. No doubt, the company needs more space to fit in all the latest tech and larger battery capacity.

A more obvious difference is the lack of a protruding physical button on the latest generation. Instead, Versa 3 adopts a recessed button which results in an overall sleeker look. To remind, the original Versa had three buttons. This came down to one physical power/wake button for Versa 2 and Lite, and it’s now down to zero.

Under the hood the three smartwatches share a 3-axis accelerometer, 3-axis gyroscope, optical heart rate monitor, ambient light sensor and vibration motor. That covers the basics. Versa 2 and Versa 3 also have an altimeter for counting floors, an SpO2 sensor, a wi-Fi antenna (802.11 b/g/n), a microphone, on-board storage for music and NFC for contactless payments.

So in terms of fitness tracking sensors, the only difference between the last two generations of Versa is the addition of built in GPS. This is something Versa 3 shares with Charge 4.

Here’s a run-down on how Versa 3, Versa 2 and Versa Lite compare in terms of specs. We’ve included Lite in this article as it remains a solid option. However, Fitbit might very well start phasing it out soon and perhaps replacing it with a more up to date Lite version. 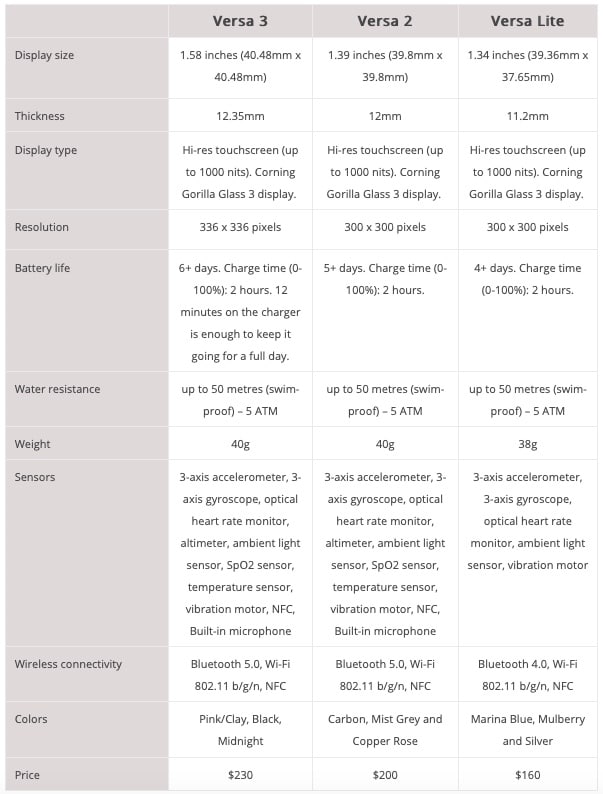 Battery life is pretty decent on all three of these. Lite is good for up to 4 days, Versa 2 for up to 5 days and Versa 3 for up to 6 days on a single charge. It just takes 2 hours to refuel from zero to full.

This sort of battery life does not make Fitbit a market leader on this count, but it does make it competitive. A fair few watches still struggle to get past the 2 day mark.

The trio also has water-resistance down to 50 meters. Its worth noting, Lite doesn’t do lap-tracking during swim workouts, the other two do.

As mentioned, all three of these watches pack the basic fitness tracking sensors so will have you covered for steps, distance, sleep, exercise and more. As expected, you do miss out on some things with the Lite version such as a floor count due to the lack of an altimeter or barometer, and pulse oxygen readings.

But let’s look at the differences between Versa 2 and Versa 3.

For starters, although they pack the same sensors inside some of these have been upgraded. For example, Versa 3 has the new PurePulse 2.0 sensor so should be better at tracking your ticker.  This is an important metric and you want it to be as accurate as possible. The upgrade should help.

The other important difference is built-in GPS on Versa 3. Up to now, you had to rely on the GPS on your smartphone when doing a run. This worked well but was not ideal. The next step up is built-in GPS. It allows you to leave your smartphone behind and still get detailed stats on your run or cycle, with maps. Apart from the screen, this is the biggest upgrade with the latest generation.

The last health and fitness related worth mentioning is the skin temperature sensor. This works mostly overnight. It establishes your baseline temperature and then keeps tabs on whether this is above or below your norm. Such functionality could be useful to alert you at an early stage that you are coming down with something.

What surprised us is that Versa 2 also has this but has not made use of it so far. Who knew? The company has only revealed this now.

Non-fitness functionality includes smartphone notifications and an app store. But this is where smart functionality ends for Lite.

The other two also come with 2.5GB built-in storage for music. This is enough for around 300 songs and is an important point in its favour. Spotify, Pandora and Deezer all play nice with the smartwatch which provides access to millions of songs.

There’s also an NFC chip which stores credit card information so you can leave your wallet behind. This comes as standard now on the Versas as does a built-in microphone.

Versa 2 and Versa 3 come with Alexa functionality. You are able to ask the watch for weather reports in your area, it will provide you with smart home control and more. Fitbit has announced that Google Assistant functionality will arrive sometimes this winter. Don’t be surprised if Alexa is phased out when the Fibit Google deal finally gets the necessary regulatory approvals.

Fitbit Versa 3 or Versa 2: Should you upgrade?

All three Versas are great watches if you’re after something that will keep tabs on your fitness around the clock. For those on a budget Lite remains a solid buy, although it lacks SpO2, an altimeter, temperature tracking and some other bits and pieces. We suspect Fitbit will soon begin phasing it out and maybe replacing it with a more up-to-date Lite edition.

Versa 3 does bring some important extras over the second generation. The most noteworthy of these are a larger display and built-in GPS.

Does this justify a $30 larger price-tag? We think so. But unless you are an avid runner or cyclist, it’s probably not worth upgrading if you already have a Versa 2. It comes with pretty much everything else.