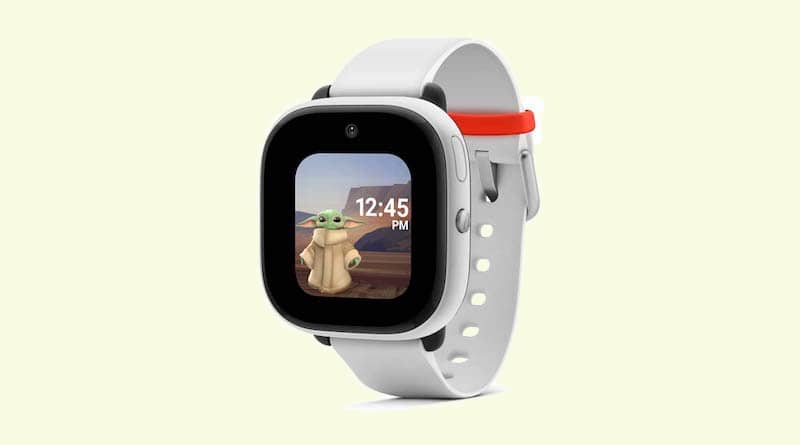 Verizon has announced today the GizmoWatch Disney Edition which features characters such as Elsa and Baby Yoda. The watch comes with a front facing camera.

This is an updated version of the second generation device which was introduced in the Spring of 2020. Geared toward kids 3 to 11 GizmoWatch 2 comes with 2-way voice calls and messaging, built-in GPS locator, 4GB memory, 4G LTE support, a step counter and more.

GizmoWatch Disney edition will keep little ones occupied with a variety of Disney characters. They can have Elsa from Disney’s Frozen set as their watch face. The other options are Baby Yoda from The Mandalorian and other Pixar, Marvel and Star Wars favorites.

Whichever your child chooses, full animations of the character will show on the watch face. They will also pop up to motivate your child to keep active, when they check the weather and more.

In terms of actual functionality, the main improvement over GizmoWatch 2 is the addition of a front-facing camera. This allows your little ones to send picture and video messages to up to 10 pre-approved contacts.

Verizon has paid much attention to safety features. There are parental controls, medical ID setup and a built-in GPS locator that can be accessed via the GizmoHub app. If your little one feels there is an emergency, there are simple to use SOS button which they can quickly press. This will put them in touch with their emergency contact.

GizmoWatch Disney Edition can be preordered starting November 12th for $199.99 on Verizon’s website. This comes with a $10 monthly fee. The watch will go on sale on November 19th, ahead of the all-important holiday shopping period.

Gizmowatch 2 comes with all the functionality of the original, plus more. The new watch has a more powerful and battery efficient Qualcomm Snapdragon Wear 2500 32-bit, Quad-core 1.2GHz processor, a larger screen (1.4” 300×300 303PPI) and improved band materials.

How much is Gizmowatch per month?

What age is Gizmowatch for?

GizmoWatch is targeted for kids aged 3 to 11.

Will there be a new Gizmowatch?

GizmoWatch 2 was launched in April 2020. In November we got the Disney version. It is possible we might see generation 3 launch in 2021.

Can you text on a Gizmowatch?

Yes, but the watch can only text preloaded messages or call contacts setup through the GizmoHub app. You can choose between sending an Emoticon, voice message, or quick message. More info can be found here.