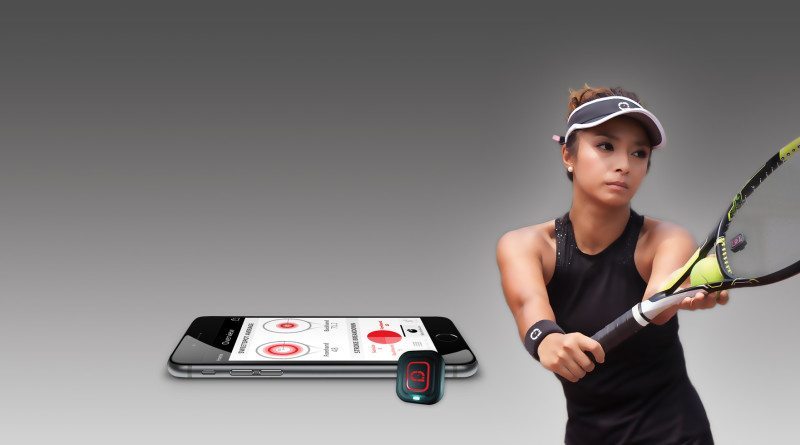 We have written a number of articles now on gadgets and sensors aimed at helping tennis players perfect their game. Babolat was the first company to come out with a connected tennis racket back in 2013. Since then, we’ve had sensors from Sony and Zepp as well as a Babolat smart wristband. Pivot has also recently launched an Indiegogo campaign to fund a new device due out later this year. The competition, however, doesn’t stop there.

Essential reading: Tennis trackers and gadgets to improve your game

A team called 9 Degrees Freedom successfully crowdfunded a new tennis sensor called Qlipp. The company raised nearly $100,000 (50% above target) up to August 2015 when the campaign closed. 9 Degrees Freedom was established in 2012 and the Qlipp sensor has been in constant development over the past two and a half years.

Qlipp is different from other sensors you can purchase today. It is one of the lightest on the market and attaches to any racket to track your game, while at the same time providing a dampening effect. Sony and Zepp place their sensors on the butt of the racquet. Babolat Pop goes on your wrist. Qlipp, on the other hand, is attached where the dampener would usually go. It sits on one side of the string bed, and on the other side you have the plastic clip.

To use it, simply turn on the sensor and the bluetooth on your device. Launch the app (the sensor connects automatically to your device). Your session is now being recorded in real time. The log records what type of shots you hit and records the speed, spin, and how close to the sweet spot you hit the ball. Its worth noting that you do need to bring both your Qlipp sensor and your smartphone into the court in order for your measurements to be recorded and saved. However, your smartphone does not have to be near as the sensor has a detection range of 40m- 50m (whole court).

The device measures every part of your stroke (forehand, backhand, and serve), including ball speed (it uses the rackethead speed to derive the estimated ball speed), spin (top spin, slice, flat), and sweet spot accuracy of each shot. After the session, you can play back and review every stroke in slow motion (if you have switched on the video function), allowing you to gain more insight into your technique. You can even set the device up to call out stats during the game. And, for added convenience, the company has recently launched an Apple Watch app – something we have yet to see from Sony, Babolat and others.

Weighing only 8g, and measuring 29.55mm by 25.66mm, you will barely feel it on your racket. The device easily attaches to practically any tennis racket with its “twist and lock” technology and has a battery life of over 4 hours.

Finally, there is also a social element. The app allows you to see how your stats match up in the Qlipp community leaderboards, organize matches with other players or share your progress on social media.

Still not sure exactly how it works? Watch the video below. Also, look out for our upcoming hands-on review of the device in the next couple of weeks.