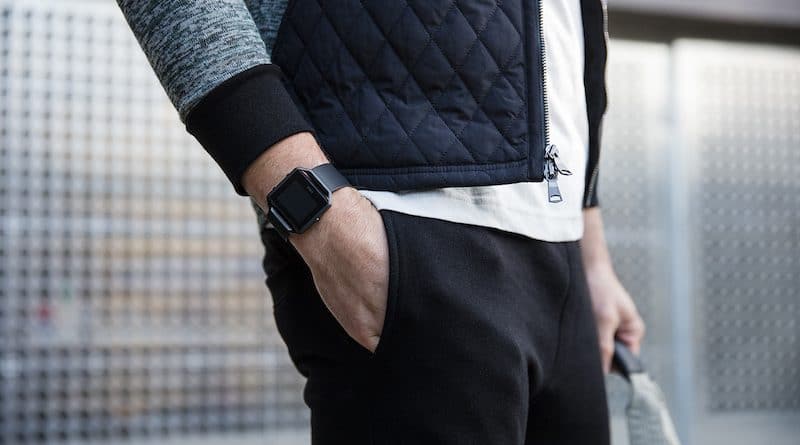 Fitbit is not making it a secret that its working on a smartwatch. Photos leaked recently, show a device that looks like a blend of the company’s Blaze and Surge fitness trackers. It reportedly sports a high-res colour display, built-in GPS, heart-rate monitoring, contactless payments, on-board storage for music and four days of battery life. Commercial launch is expected sometime this fall.

If you are looking for a fitness tracking smartwatch from Fitbit, the closest thing you’ll find at the moment is the Blaze activity tracker. Apple, on the other hand, is on generation 2 of its smartwatch. Speculation is rife that a third generation is coming this fall although it is not clear yet what improvements we can expect to see.

If you are in the market for a fitness wearable right now you may be wondering which device you should opt for, the Apple Watch Series 2 or Fitbit’s Blaze. Read on for a comparison of features.

The Blaze to an extent resembles a thinner version of the Apple Watch. This is Fitbit’s first wearable with a color touch screen that displays the time and other details about your movement for the day. The device has a hexagonal face with with stainless steel casing and an elastomer band.

The device has a fairly unisex design, that may be slightly more popular with men due to its size. Weighing only 43 grams, however, it is light and comfortable enough to forget it’s there. The satin finish, stainless steel watch comes in a bunch of colours. You can further customize it by swapping bands. This is done by using quick release spring bars which allow the tracker module to simply pop out. Many, but not all, of the bands comes in three sizes – small, large and extra large.

There are three physical buttons, but you can perform most actions on the touch-screen. The button on the left serves as a home and back command. The two buttons on the right are contextual, performing different actions such as volume control. They can also be used to select exercise options which can be useful if, for example, your hands are wet so are not registering on the touchscreen.

In terms of hardware, inside the device you will find a 3-axis accelerometer, 3-axis gyroscope, optical heart rate monitor, altimeter, vibration motor and an ambient light sensor. You won’t find built-in GPS and that is one of the important differences between the Apple Watch Series 2 and Blaze. The other is that the Apple Watch Series 2 does not have an altimeter for counting floors.

Side by side, it is difficult to spot the design changes in Apple’s second generation device. Those who have a better eye for detail will notice that Apple Watch Series 2 is slightly thicker (to accommodate the larger battery), and there is a new air vent on the side of the device.

Under the hood, Apple has upgraded its innovative System in Package (SiP) with the S2 chip. This boosts performance by up to 50%. A new GPU has also been added, which delivers up to two times greater graphics performance. In a way, it is what the 2015 version should have been. You’ll also find 512 RAM, 8GB storage (2GB of which can be used for music)

Launching apps is faster, restarting the Apple Watch is faster, doing pretty much anything else is noticeably faster. The virtual assistant Siri actually becomes useful now.

Although you could technically wear the previous Apple Watch in the shower, the 50 meter water resistance of the second generation device means that you can now use it for monitoring open and pool water swimming – as well as for reading your emails in the bath. The company has developed all-new algorithms to count laps, track average lap pace and auto-detect stroke type to measure active calorie burn.

Fitbit is way behind the curve here and you will need to leave your Blaze behind when you go swimming. According to leaks, Fitbit’s yet unnamed upcoming smartwatch will have water-resistance. But it is also rumored that the company is facing issues around making the watch fully waterproof. Without waterproofing the new device will struggle to compete with the Apple Watch Series 2.

Apple’s technical specifications suggest its watch has enough juice to run for up to two days. GPS in particular will drain the battery. Sadly though, most days you will still need to charge your Apple Watch Series 2 overnight. Fitbit is clearly in the lead on this measure. The Blaze tracker lasts up to 5 days on a single charge.

Both devices can track steps, distance, calories, and show you how many minutes you’ve been active during the day. They also display notifications for incoming calls, text messages, calendar alerts and offer music control. In addition to this, the Blaze will count floors. Some third-party apps, like Altimeter+ or the ViewRanger app, will show elevation on the Apple Watch, but that’s only if you have your iPhone with you.

The Apple Watch offers two native fitness apps: Activity, which monitors your daily routine; and Workout, which tracks running, cycling and walking sessions. All of this info is regularly synced to the Health app, so you can keep your fitness and other health related information in one central location.

Apple ‘s integrated GPS is great news for runners. This means the watch will record precise distance, pace and speed for outdoor workouts such as walking, running or cycling, without needing an iPhone. Fitbit has yet to produce a wearable with integrated GPS. Instead it has something the company calls connected GPS. This essentially means that the Blaze is able to tap into your smartphone’s GPS to better track distance and location.

And we already mentioned the waterproofing. At the end of a swim, the Apple Watch displays the time of day the activity took place, dominant stroke used (auto-detection is used), distance, workout time, pool length, laps completed, average pace, average heart rate, and both active and total calories burned, as well as the weather at your location.

In terms of other fitness tracking features, Fitbit goes a bit further than the Apple. While both wearables allow you to manually start a workout, the Blaze can automatically recognize select exercises and log them in the Fitbit app. Activities are recorded when you’ve been active for at least 15 minutes, but that time can be manually adjusted according to your preference.

Thanks to a firmware update in March this year, another feature that you will find on the Blaze but not on the Apple Watch is Cardio Fitness Level. This is calculated based on VO2 Max values and shows how you compare to those of the same age and gender.

While its optical heart rate sensor is one of the best out there, Apple does not provide you with any sort of analysis. Resting heart rate is the most obvious omission, as it is one of the best indicators of your health and fitness. To preserve battery life, its smartwatch only takes a reading every 10 minutes, unless its in workout mode when its continuous. The Blaze, on the other hand, has a continuous heart rate sensor and dishes out stats in the morning on your resting heart rate.

Furthermore, the Blaze has automatic sleep recognition. Which means, all you have to remember is to wear your tracker to bed. You will even get information on how long you spend in Light, Deep, and REM sleep stages each night, and get advice on ways to improve your kip time.

Like the first generation device, the Apple Watch Series 2 does not monitor sleep, unless of course you opt for a third-party app which you will then need to manually switch on before you go to bed, and off when you wake up. It is odd that Apple has not included a native app as it has the same combination of sensors that other activity trackers do, many of which claim to be able track sleep.

A feature that you will find on both devices, are Guided Breathing sessions, or as Apple calls them the Breathe app. This is a relaxing mindfulness experience designed to encourage users to take a moment in their day to do deep breathing exercises.

As its a fully featured smartwatch, the Apple Watch Series 2 goes much further in terms of non fitness related functions. There are thousands of third-party apps you can install. The new WatchOS3 operating system represents an important strategic shift and finally makes interacting with the device a pleasure.

All native apps now have their own watch face complications, even if they don’t display any information. If you want quick access to the weather conditions or latest news for example, you can display those. The second important navigational difference is the new Dock. Pressing the side button now takes you through to the dock with your recent and favorite apps. Previously, it took you to a largely unhelpful rotary dial of quick contacts.

The Blaze is very much a fitness tool rather than a smartwatch. It covers the basics well, and offers a wide range of essential vitals stats. From March this year, the tracker became a little more feature-packed with the introduction of Cardio Fitness Level and Guided Breathing Sessions.

The design, hardware and software updates mean the Apple Watch is finally getting closer to where it should have been all along. If you are a runner or swimmer you will appreciate the added GPS connectivity and waterproofing. However, the device now sits somewhat uncomfortably between an all purpose smartwatch and a sports-watch.

Unless you are set on tracking your swimming, we are of the opinion that the Blaze brings more to the table for those serious about tracking their health and fitness. Particularly when you take into consideration that it sells for about half the price of an Apple Watch. Its worth noting though that the Apple Watch offers many features in addition to fitness tracking. As a fully featured smartwatch, there are few wearables that can rival Apple.