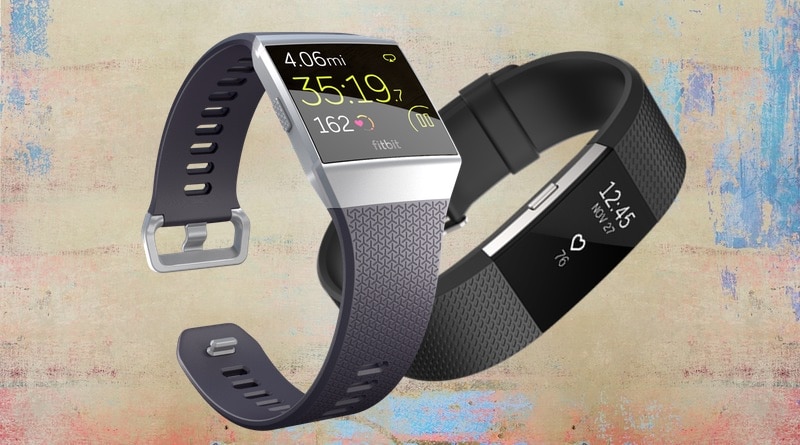 Now that Ionic is on sale its getting all the more difficult to choose a Fitbit device. There is a dozen in total to pick from!

Charge 2 has been the most popular fitness tracker on the globe since it was launched last year. For the average person who wants to monitor their activity 24/7 and who does the occasional run here and there, it ticks most boxes.

But how does it compare to Ionic, the company’s first smartwatch? Should you upgrade? Here is a run-down that will help you decide.

When it comes to design, the two devices couldn’t be more different. One is a fitness band, the other looks like a watch. Pretty much the only similarities are that they both have swappable bands with standard watch-style clasp mechanisms, and the screen is off by default.

Launched in 2016, the Charge 2 retains the look and feel from its predecessor and can still be recognised as your typical Fitbit wearable. Measuring 21mm in width, 12mm in depth and weighting only 36 grams, this is a very lightweight device.

There is a single button on the right hand side which you can use, along with tapping on the display, to cycle through the stats. The display is small but its well suited for quickly glancing down at your stats.

Ionic, on the other hand, looks very much like the Blaze. So much so, that at first glance its difficult to tell them apart. But there are a few important differences. While you still get the same square unisex look, the core unit is now built from strong and lightweight 6000 series aerospace-grade aluminum. Although it weighs more (50 grams), at 38mm Ionic is slightly narrower than the Blaze.

There are three physical buttons on the sides, one on the left and two on the right. In combination with the touch-screen, this allows you to navigate through the display.

Apart from the physical dimensions, the biggest aesthetic difference between Ionic and Charge 2 is in the display. The Charge 2 features a monochrome OLED tap screen that is four times as large compared to the predecessor device. But its tiny compared to the one on Ionic.

To compete with the Apple watch, Fitbit has upgraded the screen on its first smartwatch with increased pixels and amplified brightness up to 1000 nits. In terms of actual specs, Ionic sports a hi-res 348 by 250 pixel color LCD touchscreen that measures 29 x 21mm. This is as good as it gets in terms of display quality at the moment.

Under the hood, both wearables have an optical heart rate monitor, 3-axis accelerometer, altimeter and vibration motor. In addition to this, Ionic comes with a built-in GPS sensor. This provides more precise data on pace and distance when you’re running, and allows you to leave your phone behind. The Charge 2 also has access this type of data, but it needs your phone to be in close vicinity as it taps into its GPS readings.

Fitbit’s first smartwatch also comes with an upgraded heart rate sensor, digital compass and something the company calls a relative SpO2 sensor. This measures blood oxygen levels and could be used to identify sleep apnea in the future.

Battery life is important. You certainly do not want to be charging your fitness band every night. Ahhmmm… Apple, are you reading this?

Both of these devices have a rechargeable Lithium battery with a similar battery life. Charge 2 will keep going for around 5 days (depending on use, settings and other factors), which is fairly decent. On a full charge, Ionic will run for around 4 days. With GPS switched on, this comes down to 10 hours. Not bad.

When it comes to waterproofing, the Charge 2 is sweat, rain and splash proof. Ionic is the only Fitbit wearable, along with the Flex 2, that is water-resistant. In fact, it has a fantastic 5 ATM (50 meter) water-resistance and will track your swim sessions, too.

As you would expect, you will find the essentials on both devices. This includes 24/7 heart rate monitoring (including current, resting and heart rate zone information), tracking of steps, distance travelled, floors climbed, active minutes, calories burned and sleep (Light, Deep & REM).

Now to the differences. And there are a few.

As mentioned, Fitbit’s first smartwatch is also capable of phone-free exercising. The built-in GPS will keep tabs on your pace, distance, elevation and split times. In the water it will track your swim sessions too, with lap count, duration and calorie burn. You will need to rely on GPS on your phone to see real-time stats like pace and distance and record a map of your route on Charge 2. And don’t even think about dipping it in the water!

There is one fitness sensor you will find in Ionic but not in Charge 2, and that is the SpO2 sensor. This measures the oxygen saturation in your blood or in simpler terms – how well oxygen is sent to parts of the body furthest from your heart (such as arms and legs).

The heart rate monitor still stores data at 1 second intervals during exercise tracking and at 5 second intervals all other times, but on Ionic the quality of readings has been upgraded. So much so that Fitbit says it may be used in the future to help determine atrial fibrillation.

Essential reading: Fitbit Ionic or Apple Watch Series 3 – which to get?

When it comes to non-fitness functions, both of these devices show basic notifications and allow for music control. But that’s where it ends as far as Charge 2 is concerned.

Ionic also comes with 2.5GB on-board storage for music (enough to store up to 300 songs), it can run third-party apps from its proprietary app store, and it comes with an NFC chip for contactless payments. While it still can’t compare with Apple Watch on smartwatch features, it is a notable first effort that will get better in time.

Ionic and Charge 2 are two totally different animals – one is a smartwatch, the other a fitness band. Whichever you choose, you will not be disappointed if you are looking for something to track your health and fitness with 24/7.

In terms of sensors, there is little difference. Ionic takes everything Charge 2 offers, and upgrades it with an SpO2 sensor. The heart-rate sensor has been upgraded too. Neither is really anything to write home about.

The bigger difference is in the design and smartwatch features. Ionic comes with a water-resistant wrapping and will track your swim sessions, there is built-in GPS for tracking your runs, on-board storage for music, NFC payments and an app store. It also comes with a beautiful screen, which is right up there with the Apple Watch in terms of quality.

You won’t be surprised that Ionic is more expensive than Charge 2. So this needs to be taken into consideration when making a decision.

If you are after basic 24/7 fitness tracking, either of these devices will do. They both cover the basics, and come with the same great, simple to use app and social features.

If you are more serious about your running or are a swimmer, you will appreciate Ionic’s built-in GPS and waterproofing. If, on the other hand, you are after a smartwatch first, fitness tracker second – the Apple Watch is still the way to go.