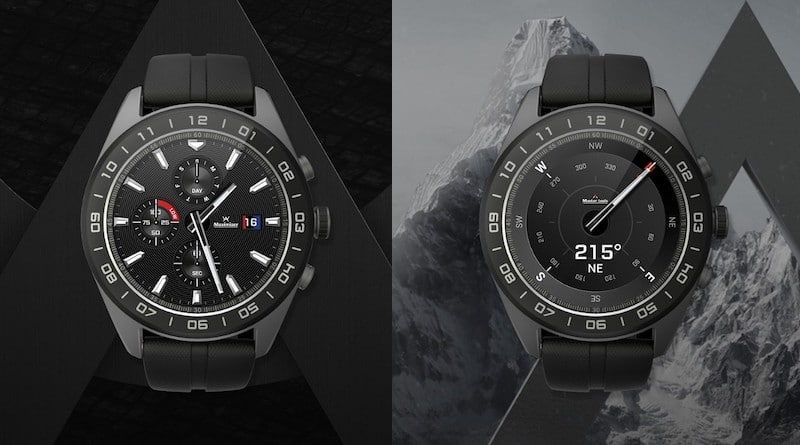 As predicted, LG has announced the much anticipated Watch W7 at its fall event. Unlike the company’s other smartwatches, this is hybrid that combines mechanical hands with a round, full-color touchscreen.

This is the company’s first smartwatch since the LG Watch Sport and Watch Style were released in early 2017. The device first surfaced back in April when it was referred to as LG Watch Timepiece.

Let’s start with the design. The watch has a stainless steel body and measures 45 x 45 x 12.9mm, which means its fairly chunky. Those with slender wrists should look elsewhere for a suitable device.

The physical needles on the display tap into highly precise quartz movement to show the time. They light up for night viewing and can also display additional information such as altimeter, barometer, stopwatch, timer and compass directions.

Behind the needles is a 1.2-inch, 390 x 390 pixel touchscreen display that runs Wear OS. The logical question is – won’t the hands get in the way of reading notifications? Well, they do – but LG has found a clever workaround.

When you press the physical button on the side, the hands move to different positions allowing you to read the screen’s contents. Info on the display will also shift slightly, up or down, depending on context. It’s not the perfect solution, but it works.

One of the benefits of having a watch-hand combination is battery life. Once the smartwatch element runs out of juice ( which is around 2 days), the 240 mAh battery will keep the analogue bit ticking along for another 100 hours.

Under the hood there’s a strange combination of features. The device sports a nine-axis motion sensor and pressure sensors, along with 4GB of onboard storage for music and 768MB of RAM. But no GPS, NFC or a heart rate sensor. The water-resistance rating is only IP68, which means the device is not suitable for swimming. And LG decided to stick with the aging Snapdragon Wear 2100 and not the new Qualcomm 3100 chip.

With these omissions, Watch W7 seems to be for the male fashionistas rather than fitness freaks. Something neat that tells the time and has a few smart features slapped on.

The timepiece will retail for $450 which is quite a bit considering the lack of features. You’ll be able to pre-order on October 7th with availability starting a week later.