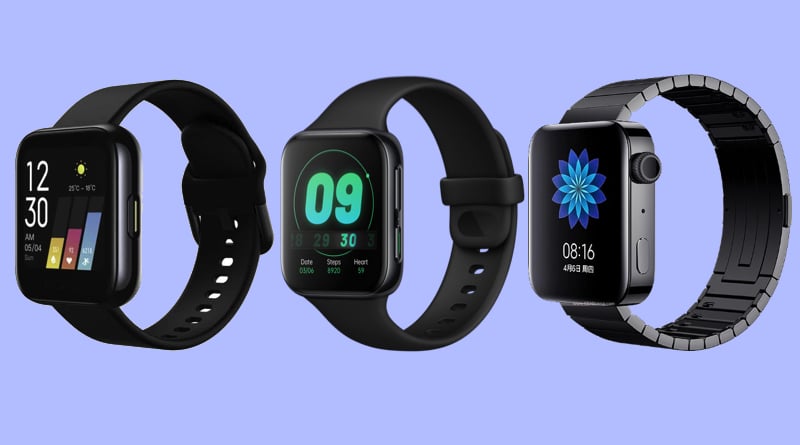 The first was the Xiaomi Mi Watch. Launched in November last year it comes from the Chinese tech giant that has succeeded in making a name for itself in the activity tracker market with its extremely popular Mi Band line.

Then we had the March unveiling of Oppo Watch. The smartphone maker made its much anticipated entry into the smartwatch space with an inexpensive Apple Watch clone.

Finally, the other day Realme made its smartwatch debut. This follows its first fitness band which was revealed a couple of months ago.

Competition is heating up and more and more companies are entering the lucrative wearables space. How do these three Apple Watch alternative stack up? Read on to find out.

Let’s come right out and say it. They say imitation is the highest form of flattery but we are getting a bit fed up with the increasing number of Apple Watch clones. A bit of originality and risk-taking wouldn’t hurt.

All three of these watches share a square-is design with similar colour schemes to Apple’s but the navigation buttons are different. On Mi Watch you get a rotating crown on the right along with a multi-purpose button underneath. Oppo Watch has two physical buttons on the right while Realme Watch comes with only one.

The image above shows how similar the trio really is. From a distance you probably would not be able to tell which is which. Mi Watch is probably the one that has most of its own identity.

Oppo Watch comes in a choice of sizes – you can pick up a 46mm model or a 41mm model. Xiaomi and Realme are a one size fits all affair. Xiaomi comes in a 44mm model and Realme in a 36.5mm case size which would suit those with smaller wrists.

In terms of build, Mi Watch has an Aluminum alloy body with a matte finish and ceramic back. There’s also a more pricey version with Sapphire crystal, polished stainless steel body and strap. Oppo Watch is also built to last with a glass front, stainless steel frame (or aluminum frame), ceramic sapphire crystal back (or plastic back).

Realme Watch is the cheapest of the three, not only in price. It comes with a Thermo Plastic Polyurethene build. But this has the advantage of being extremely lightweight. At 31 grams it weights almost half the other two.

The screen type is also different. Mi Watch and Oppo Watch sport an AMOLED with similar resolution, size and quality. As you’d expect, Realme lags on this count, too. Its smaller 1.4 inch display is a TFT LCD touchscreen, so the resolution is not as good.

The same is the case with water-resistance. Realme Watch’s IP68 rating means it can survive dips down to depths of 1.5 meters. We wouldn’t suggest swimming with it. Mi Watch and Oppo Watch have an excellent 5ATM rating so are suitable for all types of water activity.

Moving on to the fitness tracking sensors and this is a bit of a mixed bag. The basics are covered on all three with some slight differences.

Realme Watch has a 3-axis accelerometer sensor, optical heart rate sensor and PulseOx sensor. The other two lack the ability to take blood oxygen readings. The extras that you get with Mi Watch are a gyroscope sensor, geomagnetic sensor and barometer. You also get this last one with Oppo Watch in addition to a compass. Also worth mentioning is that Oppo is the only one with a 6-axis accelerometer (instead of a 3-axis) and the ability to take an electrodiagram (ECG).

Another important addition that you get with Oppo and Xiaomi is built-in GPS. This is vital to those that exercise outdoors often as it means they can leave their smartphone behind and still get detailed statistics.

The trio also comes with NFC for contactless payments. But only Xiaomi Mi Watch and Oppo Watch have eSim support.

Battery life is a hurdle Apple is yet to overcome, while others seem to be doing only slightly better. Oppo’s 46mm model will keep going for around 40 hours in full mode, and 21 days in limited mode. Expect about a half of this on the 41mm iteration. Xiaomi Mi Watch is good for around 36 hours on a single charge. Realme is the star performer with about a week of juice. However this is due to its poorer quality display and lower overall specs.

All three of these watches come with most things a typical person needs to track fitness around the clock. A step counter, heart rate sensor and more. They will monitor your steps, distance, heart rate, activity – the list goes on. Interestingly, all three can keep tabs on sleep. Apple is yet to overcome this hurdle although it is rumoured the Cupertino outfit is soon adding native sleep tracking to its device.

Realme Watch has one extra over the others in the form of a pulse oxygen sensor. This measures the oxygen level in the body. However the timepiece lacks many features that can be found on Mi Watch and Oppo Watch.

These include the above-mentioned built-in GPS. This will be important to some, but not to others. Mi Watch and Oppo Watch also come with a barometer for counting floors climbed. Another difference is water-proofing. With their 5 ATM rating the duo can track activity both on land and in water.

Worth mentioning are Firstbeat features which are present on the Mi Watch. These include 24/7 stress monitoring revealing how your body responds to the challenges of life and environment. There’s also a Body Resources function which lets you know when you train hard when to take a day’s rest.

The feature that you get on Oppo Watch but not on others is the ability to take an ECG. This is something else it shares with the Apple Watch.

Non-fitness features that can be found include smartphone alerts, music control, alarms, find my phone, NFC for contactless payments and more. Oppo and Xiaomi have eSim functionality which allows owners to use the same number as the SIM card on their phone, along with local storage for music.

All three of these watches are full to the brim with features and look great. But there are a few differences to be aware of.

The $50 Realme Watch is by far the cheapest of the three and this shows in its build, screen quality and feature-set. It is the option for those looking for a first-time purchase or those not interested in all the bells and whistles of the other two.

The things that work in Oppo Watch’s favour are a wealth of fitness tracking features. These include ECG, built-in GPS and more.

Xiaomi Mi Watch comes in at a similar price point as Oppo Watch. It, too, has lots of fitness tracking features and is probably the one which has the most distinct look of the three.

Oppo Watch and Mi Watch are more similar to the Apple Watch in terms of specs and design than Realme Watch. These are first generation devices, which represent interesting lower-cost alternatives to the best selling smartwatch in the world. For now the trio is only available for purchase in Asia. Hopefully international availability will come in the next few months.