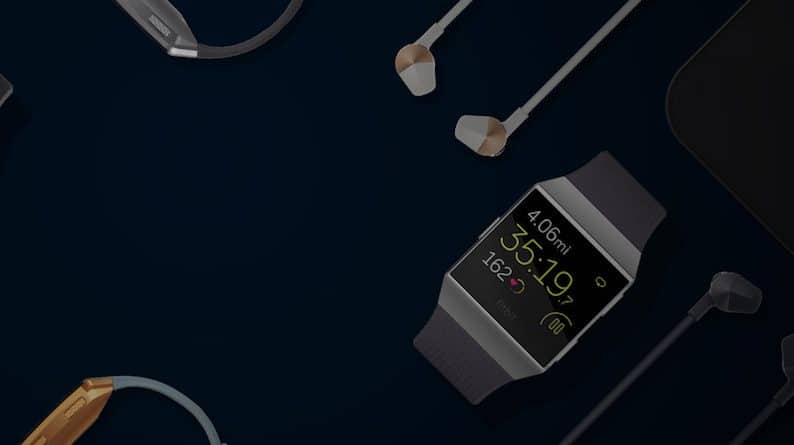 Following months of rumours and speculation, Fitbit has finally taken the wraps of its new fitness watch. But that’s not all. The company has also revealed a new version of its smart scale and its first ever bluetooth headphones set.

Lets go through them one by one.

The headline is, of course, the release of Fitbit’s first ever proper smartwatch. Dubbed Fitbit Ionic, this is a device with features that compete squarely with the Apple Watch and Garmin’s stable of sports watches.

Lets go right out and say it. With its blocky, retro design, Ionic is not exactly a looker. But at least it packs some decent specs under the hood. You’ll find 8 different sensors inside including an altimeter, 3-axis accelerometer, digital compass, GPS, optical heart rate monitor, ambient light sensor and vibration motor.

The device also has something Fitbit calls a relative SpO2 sensor. This measures blood oxygen levels and could be used to identify sleep apnea in the future. The more accurate heart rate sensor has the potential to help with determining atrial fibrillation (irregular heartbeat).

When it comes to features, as expected this is a timepiece that puts fitness first. You’ll get the usual steps, distance, floors, active minutes and calories burned, along with inactivity reminders and automatic activity recognition. In the morning the app will provide you with detailed info on light, deep and REM sleep stages. The watch benefits from advanced sleep features and insights which were introduced earlier this year.

Fitbit Ionic is perfectly capable of phone-free exercising. For outdoor fitness tracking, the built-in GPS/GLONASS will keep tabs on your pace, distance, elevation and split times. It can also time your intervals. The exercise mode captures real-time stats on 20 different types of activities such as biking, golfing, kickboxing and tennis. Because the watch is water-resistant down to 50 metres, it will track your swim sessions too, with lap count, duration and calorie burn.

Fitbit has, however, taken its first timepiece beyond the fitness tracking environment. The 2.5GB of local storage is enough to house more than 300 songs for offline playback, plus you get access to Pandora, no phone needed. You can listen hands-free by connecting to Fitbit’s new wireless headphones.

There are the usual notifications, including call, text and calendar alerts. A first for Fitbit, Ionic sports a built-in NFC chip which stores credit card information so you can leave your wallet behind. Fitbit Pay will work with American Express cards and select Visa and Mastercards from supported banks. Over 10 markets across the globe will be supported at launch, with more countries and banks planned soon.

Thanks to its acquisition of Pebble, the watch runs on Fitbit’s proprietary operating system which is compatible across mobile platforms. The App Gallery has Strava, Accuweather, Flipboard, Starbucks and more, and Fitbit will open its SDK for third-party developers in September. That means, anyone with a bit of coding knowledge will be able to create their own watch face or app. If you are one of these people, head over to dev.fitbit.com to learn more.

In terms of design, the core unit is built from strong and lightweight 6000 series aerospace-grade aluminum. The high-res LCD touchscreen measures 3.0 cm x 2.2 cm, and features a resolution of 348 x 250 pixels. To compete with the Apple Watch it sports increased pixels and amplified brightness up to 1000 nits.

You can pick between the Sport, Leather and Classic versions. Each comes with its own accessory bands, which are swappable. Further customisation is possible by personalising the display with one of 15 different clock face options. Fitbit will be offering an Adidas-branded special edition as well. What exactly this entails is not clear, but presumably it will come with a special edition design and include training programs.

Iconic promises a respectable four days of battery life, and less with continuous music playback. Switching the GPS on will reduce it right down to 10 hours. Nevertheless, this compares well with the competition, and gives Apple Watch Series 3 something to aim for.

If you are itching to get your hands on Fitbit’s first smartwatch, you can pre-order on Amazon. The watch is slated for release in October, at which point it will be available at many other retail outlets.

With this timepiece, the San Francisco manufacturer has certainly tried to cover all bases. Whether this is enough to reverse its flagging fortunes remains to be seen.

Long overdue for an update, the original Aria scale was released back in April 2012. At the time, it was one of only a handful of connected scales on the market. This is, however, no longer the case and many companies are on their second or even third generation smart scales.

Today, Fitbit has announced the second generation Aria 2. The new scale has a fresh design and a few other updates, but its core features remain largely the same. This means it will track weight, BMI, body fat percentage, with now the addition of lean mass. Just like its predecessor, it can recognise up to 8 users.

Fitbit says its much easier to set up the new scale and you can do it over the smartphone using the app. The scale also offers more accurate readings.

The Aria 2 will cost $129.95 when it releases in October. You can pre-order now on Amazon.

Fitbit is jumping headfirst into the Bluetooth headphones game with Fitbit Flyer. The buds are sweat-proof and water resistant so will survive the most robust of workouts, come rain or shine.

You’ll get 6 hours playtime with music and call controls via the 3-button control box. Fitbit says a 15-minute quick charge over Micro USB will get you another hour of battery life. Flyer is compatible with Siri, Cortana and Google Assistant, which means you can use simple voice commands.

There is nothing too special about these headphones and retailing at $129.95, they are a bit pricey. The main attraction is that they’ve been designed to go along with Fitbit Ionic. To that end, the headphones are able to connect with two devices at the same time so you can keep them talking to both your smartphone and smartwatch. There’s the additional bonus of a quick pairing feature with Ionic.