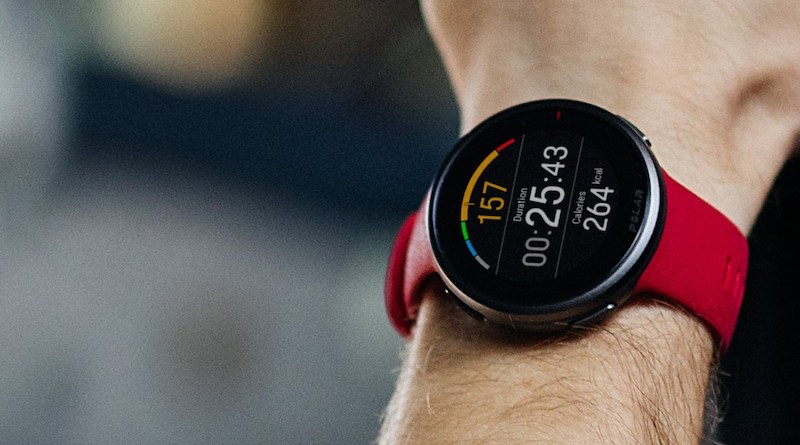 Polar has realy upped its game when it comes to high-end sports watches. The latest device in its arsenal is the Vantage V2. The second generation version is the most advanced smartwatch from the company to date.

But this is not the only new offering from Polar this year. Despite the upheaval created by the coronavirus, they’ve released two other watches. One of these is the Polar Grit X, the other Unite.

If you’re considering a high-end sports watch from Polar there are a few devices worth considering. Grit X is a rugged option for the outdoorsy types. Vantage V and its successor V2 are great for those after a premium multi-sport watch.

All three of these are similar in looks, so much so that you might struggle to tell them apart. They adopt the traditional circular design, which is very predominant in the sports watch space.

Vantage V was launched in September last year and is the smallest of the bunch. It measures 46mm in diameter and 13mm in thickness. But despite this, at 66 grams it is the heaviest. This is primarily due to its stainless steel case.

The other two watches are 47mm in diameter but retain the 13mm depth. Vantage V2 is the lightest of the bunch weighing only 52 grams. In its case, instead of steel Polar has opted to use a lightweight aerospace aluminium alloy. Grit X uses the same build as the original Vantage, so pretty match matches it in weight (64 grams).

All three of these have the exact same 1.2 inch touch-enabled always on color display. This comes with laminated anti-fingerprint Gorilla glass lens. Grit X goes slightly further as far as screen protection as it has an extruded stainless steel bezel with lugs.

The five physical buttons can be found on all these. Two are on the left and three on the right. The touchscren is useful for scrolling longer menus or pages or reaching the quick settings.

These are sports watches that can take quite a beating. They will also happily work inside or outside water. Vantage V2 and Grit X down to depths of 100 metres, Vantage a half of this.

Below the surface the trio shares GPS/GLONASS, an accelerometer, heart rate and barometer. The optical heart rate sensor has 10 LEDs. A half of these are red, 4 orange and 1 green for different lengths of skin penetration. You also get a built-in compass with Grit X and Vantage V2.

Battery life is decent across the board. In normal smartwatch mode, they’ll keep going for about a week on a single charge. Switch GPS on and this falls to 40 hours. Grit X and Vantage V2 allow you to specify the frequency of GPS readings, which enables you to extend this to 100 hours.

These are watches built for ambitious goal-oriented athletes. If you’re after something to track your steps and sleep there’s no need to buy one of these. Get yourself a Fitbit, instead.

But if you want something that will track over 100 different sports with detailed performance and recovery statistics these Polar watches should suffice.

As far as basic fitness tracking, they’ll all do exactly the same thing. It’s when you delve into more advanced functionality where nuances start to arise.

Outside of the likes of Whoop, Polar has been a leader in recovery metrics. Particularly as compared to the likes of Garmin, Apple and others. Users get a Nightly Recharge value, Recovery Time, Training Load Pro, Fitspark and much more.

Vantage V2 however offers some extras over the original Vantage V and Grit X. All of these additions will probably be a nice-to-have rather than a must-have for most.

They come in the form of performance tests for running and cycling. The tests allow you to work out the maximum aerobic speed and power with more detail and tweak your heart rate zones appropriately.

The other upgrade is something called a Leg Recovery test. You’ll need to jump a few times to complete this. The result is a metric that lets you know if your leg muscles have recoverd enough for a high intensity training session.

Finally, Vantage V2 has also taken on-board some Grit X functionality. This cannot be found on the first generation watch. It includes maps for turn by turn route navigation with the popular Komoot app. The other functionality are FuelWise fuelling recommendations and Hill Splitter which shows how you performed on ascent and descent segments of your route.

Another thing worth mentioning is that Grit X does not have the Recovery Pro which you can find on the other two. This is a metric that measures daily and long-term recovery letting you know when its time to rest when to push hard. Userful for those who run or cycle often.

This table shows what’s available on each.

As far as smart functionality, Polar watches are not exactly leaders of the pack. Their ability pretty much stops with notifications about incoming calls, messages and apps from a connected smartphone.

The trio does not not have NFC, music storage or anything of the sorts. Having said that, Vantage V2 does go a bit further. It allows users to control smartphone music and Spotify. Just like on Grit X, users also get weather updates.

Polar is offering some decent competition to other sports watch manufacturers. And when it comes to recovery metrics, it is giving others something to aim for.

If you already own a Vantage V or Grit X, we don’t feel the extras on Vantage V2 are worth the upgrade. Keep the watch you have and save a few dollars. Apart from music control and a lighter build, you’ll miss out on a few performance tests. Not a big deal.

But if you’re new in the market, it makes sense to go for the latest watch. Particularly as Polar will now start phasing out the original Vantage V. Plus its unlikely that one will be upgraded with much in terms of software updates.

Grit X remains a decent option for those after something more rugged. It also offers an option that is less expensive than Vantage V2 (check price on Polar).