Deezer is one of the most popular online music streaming platforms in the world. Along with Spotify and Pandora, you can use it on a selection of Fitbit devices.

Why install Deezer?
How much is a Fitbit Deezer subscription?
How to setup and activate Deezer?
How to use?
Troubleshooting common problems

Why install Deezer on a Fitbit?

The Paris-based company gives its 14 million listeners access to 56 million tracks. This makes its music library one of the biggest on the globe. That’s the attraction as compared to other similar platforms. Whatever you are into, most likely you will be able to find the tunes somewhere on the music platform.

The other reason to install Deezer is that it works well. The integration is pretty seamless on Fitbit smartwatches and the app is easy to use.

Deezer allows you to upload music to your wearable directly through the service. Proper offline storage is something that can be found on Ionic and Versa 2. But unfortunately, the same cannot be said of Sense and Versa 3. For some reason Fitbit has decided to strip this functionality.

Deezer offers a way around this. Upload music from the service and save it directly to your watch. This allows for a true phone-free experience, particularly on devices such as Sense and Versa 3 which have built-in GPS, as well. This is better than Spotify which only allows music streaming. 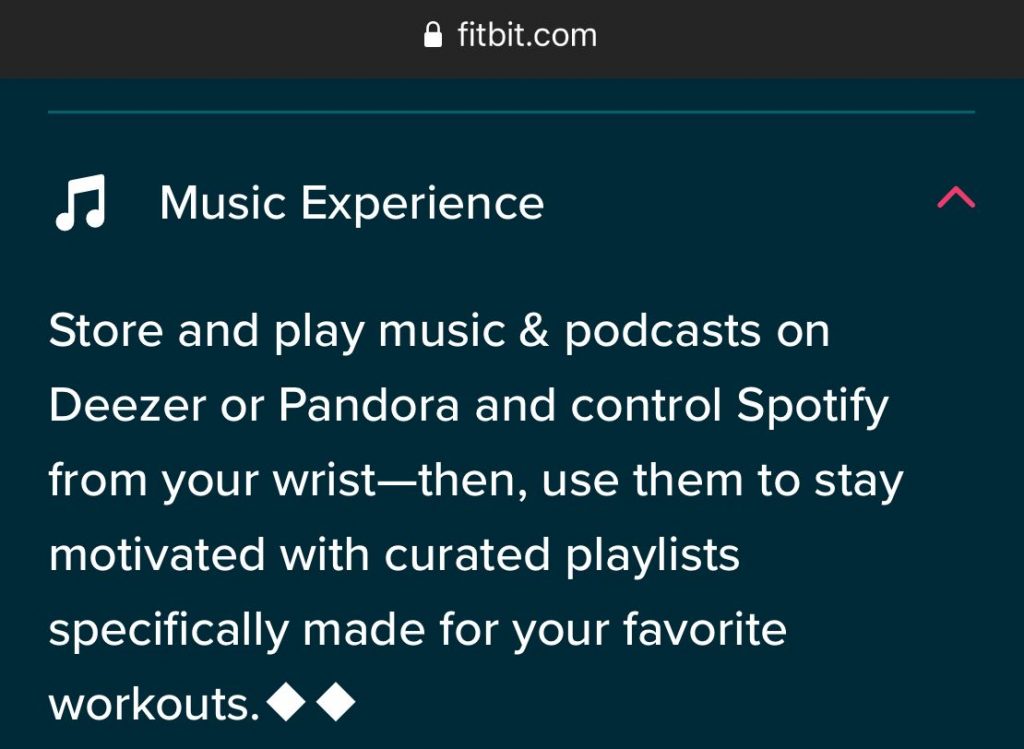 Even if you have one of the older devices that supports direct offline music storage there’s a benefit. Savings songs to your watch through Deezer is much simpler than manually copying MP3 files.

How much is a Deezer subscription?

There are three types of Deezer subscriptions. The free costs nothing and gives streaming access to all 56 million tracks and shuffle play. But that’s where it ends.

The next step up is the $9.99 monthly premium subscription. This adds Unlimited Skips and Offline mode to the above. The Offline mode is what you need for storing music to your watch.

The final option is Deezer Family. As its name implies, this provides access for multiple people on a single account. It costs $14.99 and allows access for up to 6 users.

Annual plans come cheaper, and there are also some other options such as a student subscription. You can find all of them on this link.

All things considered, this is an affordable service. Particularly if you are music lover.

Deezer also has a generous 3 month free trial for Fitbit users. For non-Fitbit users Deezer only offers a 1 month free-trial.

The first time you access the service through your smartwatch, you’ll see the offer. But if you don’t want to continue after the trial is up, make sure you unsubscribe beforehand. Otherwise you’ll be billed $9.99 per month.

How to set up & activate Deezer on a Fitbit?

The Deezer app works on Ionic, Sense and the Versa range. It’s quite possible the app is already installed on your device. It’s country dependent as the service is not available everywhere. But it is available in more than 185 countries.

The next step is to make sure you are connected to WiFi and launch the app on your watch. You’ll see an activation code which you’ll need to enter at fitbit.com/deezer. This is your unique code so make sure you type it in correctly.

When entering the code you’ll be able to access your current Deezer account, or create a new one if you don’t have one already.

The code only lasts a few minutes so this all needs to be done in one go. When you enter the code on the Fitbit website, it should disappear from your watch.

How to use Deezer on a Fitbit

Once activated, the service will allow you to store tracks on your watch, sync playlists, get a daily refresh of songs with Deezer Flow and choose from a variety of customised playlists. Its safe to leave your phone at home, as once you download playlists you can listen to the music anywhere directly from your wrist.

Playlist transfer can be battery draining, so it’s best to place the watch on the charger while doing this. Once you’ve downloaded playlists, connect a Bluetooth audio device or a speaker to your watch. Then it’s simply a matter of following the controls in the Deezer app.

You’ll see a list of downloaded playlists – with a play button next to each. Tapping on the name of the playlist shows a list of all of its tracks. You’ll also see a Shuffle All option at the top. When a track is playing, a small equaliser icon will appear next to it.

If you get tired of the song, you can skip to the next track or the previous one. Other controls include pause and +/- for volume.

The page will give you access to your Deezer account. You can add and remove playlists here and access your saved customised lists. The controls are self-explanatory. All of this will sync automatically when your watch is charging close to a WiFi network.

Deezer also has something called Flow. This includes your favourites and recommendations based on the content you’ve listened to and liked. You are not going to find information on Flow in the smartphone app as this is an automatic service. So don’t waste time looking for it.

Another problem you might come across is that Playlists are not syncing. You can do a force sync by tapping the menu icon “ooo” in the Medica>Deezer section of the smartphone app. Always make sure your watch is on its charger and that there’s a good WiFi signal when syncing your playlists.

Out of space error!

You can only store so many songs on your smartwatch. If you sync too many playlists you may run out of space. If so, you’ll get the “out of space” error message. Then it’s a matter of not adding any more playlists or deleting some previously uploaded ones to free up storage space.

The Fitbit smartphone app allows you to view how much space you have left. This can be found in the Deezer section.

How can I transfer my own music files or podcasts?

You can’t. While the streaming service will allow you to upload personal music files these will not be available on your watch or the Deezer smartphone app.

Uploading of such files can be only be done on Fitbit watches that support direct offline uploads, i.e. not going through the Deezer service. This includes the Versa 2 and Ionic. The video below explains how to do this.